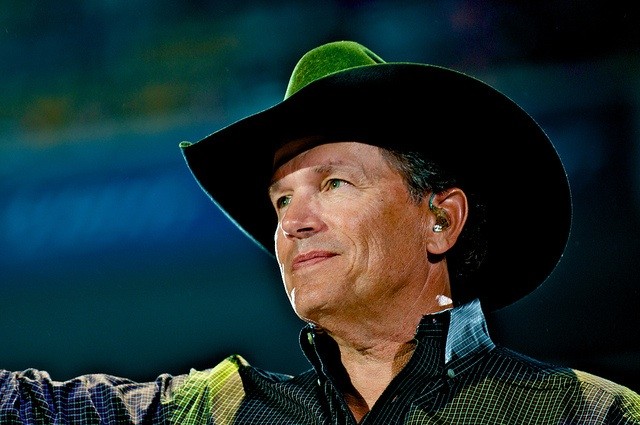 ARLINGTON, TX ­– The whole of Texas, and a few very famous singers, came out to see George Strait say farewell, so long and vaya con Dios on the last leg of his The Cowboy Rides Away tour on June 7 at the AT&T Stadium. And like the true chivalrous cowboy gentleman who wouldn’t keep a lady waiting, Strait walked down the red carpet and took to the rotating stage at exactly 7:30 p.m. to the roars of nearly 105,000 of his closest friends and started his set with the country goodness of young love with “Check Yes or No.”

For almost three and a half hours, King George buddied up to the men and swooned the ladies with his honey-cut-with-whiskey voice and led the entire stadium in a 41-song sing-along.

It is safe to say, if you are going to spend over $150 per person for the cheap nosebleed seats to see him or as much as $1000 for floor seats, you grew up listening to George. (Or you became addicted later in life.) Regardless of how you got into that stadium, what you witnessed on that Saturday night was a legendary and landmark record-breaking moment for music history.

You could feel the palpitations of need from each individual person, young and old, in that stadium to just hear that one George song that changed everything for them; or that song that took them back to their daddy’s barn; or their first rodeo; or on their first college road trip; or their first dance as husband and wife. (Or inspire this writer to slow dance with her beau in the aisle to “Give it All We Got Tonight.") And what he delivered was a magical nostalgic trip with songs like “Amarillo by Morning” from the 1982’s Strait from the Heart album to his single, “I’ve Got a Car,” from his recently released album Love is Everything.

Moving and shaking and singing couldn’t be helped as Strait took turns with honky tonks, western waltz ballads, a little Cajun and a lot of boot scooting music that had people two-stepping all over the packed stadium.

The concert was interspersed with a country star-studded roster of guests who came to pay tribute to the patriarch including Alan Jackson, Miranda Lambert, Eric Church, Jason Aldean, Sheryl Crow, Kenny Chesney, Martina McBride, Faith Hill and a possibly drunk or injured Vince Gill (who kind of stumbled onto the rotating stage and never really recovered, enticing Strait to ask him if he was okay.)

All gave reverence to Strait’s legendary music including Alan Jackson who said "In the early 80s when I was a young man in Georgia, I was a big fan of 'Unwound.' You're the reason I came to Nashville, Tennessee. God bless you."

McBride, who toured with Strait in 2011 and 2012, joined him in the Johnny Cash-June Carter rendition of “Jackson.”

Although he had little banter, the entire stadium practically stood at attention and in silence when the man spoke, because of course, when the King speaks, he’s got something to say. During a break, he brought up on stage Sgt. Leroy Petry, a Medal of Honor recipient who was wounded in combat in Afghanistan. On his eighth deployment, Sgt. Petry was shot in the leg, intercepted a grenade, managed to throw it back and save his unit, but it blew off his arm. Strait along with Wounded Warriors Foundation gave the sergeant and his wife a mortgage-free home. It was truly a Red, White and Blue moment.

But like all good things, the concert had to come to a close.

“I almost hate to sing this song,” Strait said with plenty of emotion as he went into “Cowboy Rides Away,” and like the entire concert, the moment he began with “I knew the stakes were high right from the start," George was speaking personally to you letting you know it was okay, and he was going to miss you too but he wasn’t going far.

Things picked up on the encore when the entire line-up came back on stage and joined Strait in a crowd-pleasing rendition of Cash’s “Folsom Prison” and “All My Exes Live in Texas.”

There is no doubt the man from Poteet is the true Troubadour of Texas with over 61 chart-topping songs who now holds the North American record for the largest attended indoor concert.

It was Miranda Lambert, giddy as a school girl getting to sing “Run,” her favorite song with her idol who said it best of all “I’m playing at home in Texas with the king of country music and the king of Texas!”