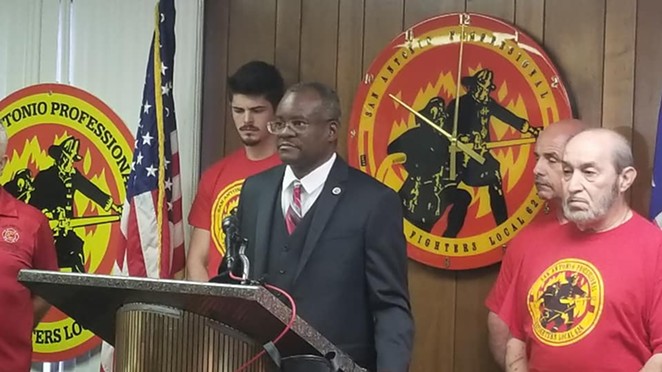 Remember that debate on KSAT between Mayor Ron Nirenberg and fire union President Chris Steele, planned for October 10? Where they were going to finally have it out over the union's three propositions on the November 6 ballot.

Well, we did warn you that it might not happen. And here we are.

During KSAT News' 10 p.m. broadcast on Wednesday, anchorwoman Isis Romero told viewers the debate is off. While Nirenberg quickly accepted KSAT's invitation, she said, Steele hadn't responded by the station's deadline of Wednesday at 5 p.m.

If this feels familiar, here's why: Nirenberg and Steele were supposed to square off in a debate two weeks hosted by UTSA and the San Antonio Express-News. But Steele pulled out at the last minute, prompting Nirenberg to withdraw, too.

One would cap future city managers’ compensation at no more than 10 times the annual pay of city government’s lowest-paid worker. The amendment would also limit the city’s top non-elected official to no more than eight years on the job.

Another would require city officials to take contract disputes to binding arbitration, not the courthouse.

Finally, one of the amendments would lower the bar for putting proposed ordinances – approving utility rate increases, for example – to a public vote, or referendum.