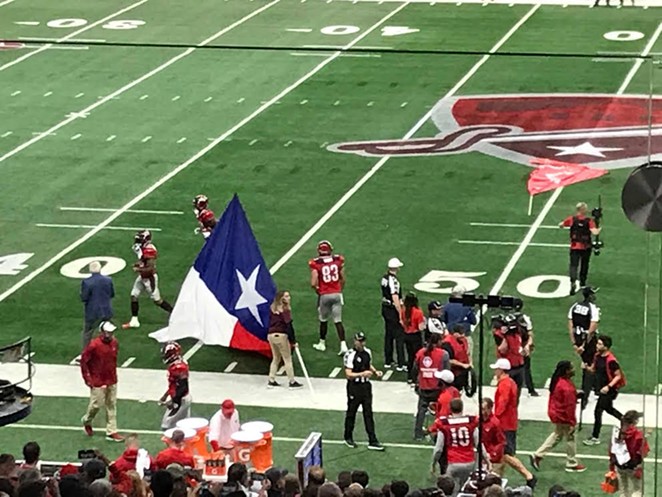 The Alamo City's played host to at least a dozen failed football leagues over the years, so the Alliance for American Football's current woes should have a familiar feel to many of us.

In case you haven't been keeping score, here's the deal: The AAF yesterday suspended operations with two weeks left in its regular season. Players on the San Antonio Commanders packed up their gear and departed the Alamodome yesterday after hearing the news from the team's GM, KSAT reports.

As the Current pointed out last summer, the odds were always against the league, which apparently hit a speed bump with one financial backer. And building a new pro-sports league requires a long, long, long-term investment, no matter how high-profile its leadership or how excited local fans appear.

“Even in normal circumstances, it’s really difficult to start a league,” David Berri, a professor of sports economics at Southern Utah University, told the Current last year. “It’s something that takes decades. It’s not something that’s going to happen in 5 to 10 years.”

This is Texas, and Texans love football. So, no doubt, many will be disappointed San Antonio's gridiron dream once again failed to materialize.

If you're one of those folks, look at it this way — at least you weren't playing in the league. According to Sports Illustrated writer Robert Klemko, the AAF isn't even picking up the cost of the players' plane rides home.

Source says AAF teams making players pay for their own flights home. What a clown show this was.


Apparently, though, Heisman Trophy-winner Johnny Manziel offered a little tough love on Twitter to those left without a paycheck.

If you’re an AAF player and the league does dissolve. The last check you got will be the last one that you get. No lawsuit or anything else will get you your bread. Save your money and keep your head up. It’s the only choice at this point unless something drastic happens.