The Amorous Harmony and Marital Discord of 'The Last Five Years' 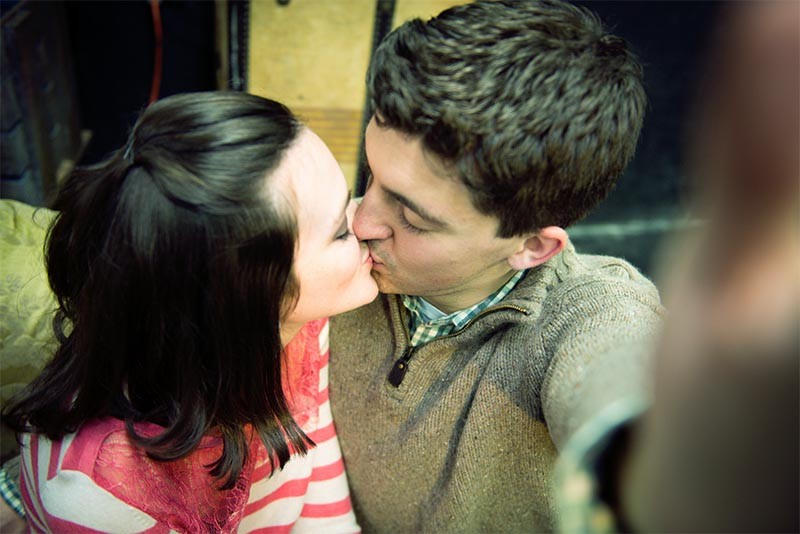 As its title and two of its songs, "Moving Too Fast" and "The Next Ten Minutes," suggest, The Last Five Years is a musical about time — the brief duration of a love that Jamie Wellerstein and Cathy Hiatt vow will be eternal. Drawing on his own experience so directly that legal threats from his ex-wife forced script alterations, writer-composer Jason Robert Brown traces the evolution of the relationship between a writer and an actress from infatuation to divorce. The drama proceeds almost entirely through songs sung separately and alternately by Jamie and Cathy. What is structurally innovative about the piece is that Jamie recounts their relationship in chronological order while Cathy begins at the doleful end and sings her way back to their buoyant beginnings. In the heart-rending conclusion, a radiant Cathy chirps goodbye following their first date, while Jamie sings farewell forever.

It may be that cads get all the good tunes, and writers get all the best lines. Jamie, a self-absorbed and unfaithful novelist, gets to sing the wittiest of the songs. In "Shiksa Goddess," he, a New York Jew, mocks his misfortune in falling for a pretty goy from Maryland. "The Schmuel Song" is a musical fable about a dying tailor in Eastern Europe who fulfills his dream of designing a glamorous garment when an obliging clock temporarily stops. Cathy's lines are often mere banalities designed to advance the plot, though the torch song "A Summer in Ohio" is a show-stopper, and "Climbing Uphill" makes palpable Cathy's mounting frustration over the cattle calls that an aspiring actress must endure. The fact that, at 23, Jamie publishes his first novel with Random House and Cathy, equally ambitious, fails at acting poisons their marriage.

Basking in his own literary glory, Jamie has little respect for Cathy's talent. But you have to respect the immensely talented Reagan Wilson for bringing hapless Cathy to life. She and the magnetic Grant Bryan, who plays Jamie, carry the entire two-act production in a range of moods and musical styles — including rock, jazz and klezmer. Not only have they mastered their tempos, but the timing of their costume changes following each number is flawless. Just offstage sit five musicians, while two stagehands move swiftly and efficiently to readjust the furniture after every song.

A bittersweet valentine, the movie version of The Last Five Years, directed by Richard LaGravenese and starring Anna Kendrick and Jeremy Jordan, is scheduled to open February 13. The production will reportedly add at least five characters — including Jason Robert Brown as a pianist at Cathy's audition — to the cast. The movie transcribes for orchestra the intimate, intense chamber music currently performed under Chris Berry's deft direction at the Cellar Theater.