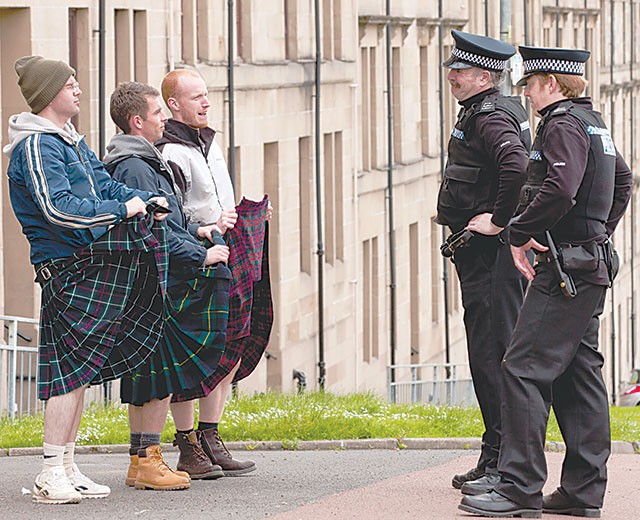 Perhaps only in Scotland could the appreciation of fine whiskeys be touted as a path to redemption, but that’s the improbable road taken in veteran British filmmaker Ken Loach’s new comedy, The Angels’ Share. The title is a distiller’s term for the portion of whiskey that evaporates from the cask during aging, and seemingly divine intervention is echoed in this story about finding an escape from the violent slums of Glasgow.

Robbie (Paul Brannigan) is a “wee thug” who narrowly escapes jail for a random beating, and is performing community service when the judge decides that impending fatherhood is worth giving him a last chance to take care of his pregnant girlfriend, Leonie (Siobhan Reilly). But, stuck in the midst of hereditary violence, doomed to fight the son of his father’s childhood enemy, and facing no sympathy from his girlfriend’s father, the future looks hopeless.

The story (told with a stiff Scottish brogue that necessitates the fortunately provided subtitles) makes a borderline abrupt switch from stark realism to buffo comedy when Robbie discovers he has a gift for discerning Scotch, a talent he fosters through the mentorship of Harry (John Henshaw), the kindly leader of the work crew he has been assigned to along with an odd lot of misfits. What follows next is a road trip/heist story, as Robbie and his loser friends set off to the Highlands (masquerading in kilts as the young members of a whiskey club) to steal a cask of rare vintage from under the noses of the prestigious distillery where it awaits auction. Of course, things don’t go quite right — they leave the cask behind, but do manage to get away with a few bottles that go unmissed as part of “the angels’ share.”

That brutal realism gives way to farce in this winner of the Jury Prize at the 2012 Cannes Film Festival is unsettling and raises a cloud of disbelief, though the quick pace and fairytale ending of the screenplay, written by Loach’s longtime collaborator Paul Laverty, doesn’t fail to please. For almost 50 years, Loach has been producing social realism works chronicling injustice, receiving assorted European acclaim. Guessing that he’s shied away from the hard truth in this film to pander for laughs would be a mistake. The necessary virtue displayed in The Angels’ Share is a knowing, devious kind, coupled with theft and no patience for simple sobriety — hardly the hero’s admixture in the traditional morality play. But it rings as true as the lilt of the Scottish brogue, though you might need some help in the translation.