The Art And Odyssey Of Nina Donley And Zac Cimi Arte 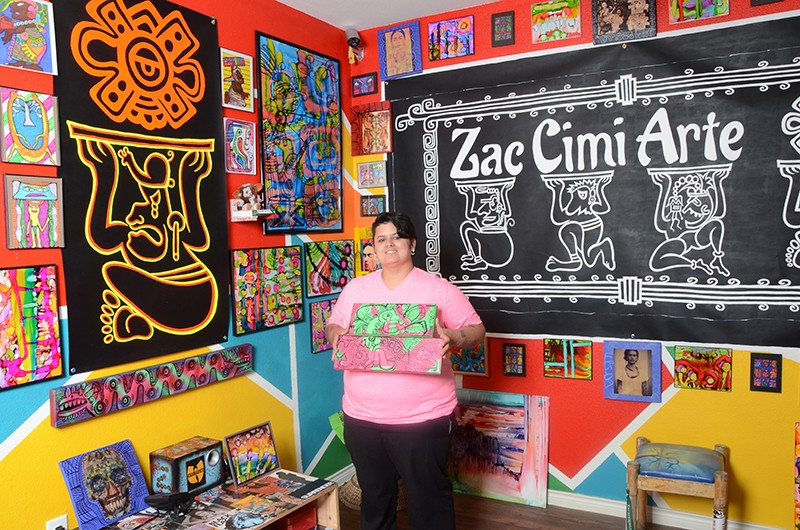 Nina Donley, prolific artist and owner of the Zac Cimi Arte gallery, creates art on various hard surfaces that makes you feel like you've been teleported to a primal rave in the neon-haunted blackness of an ancient Mayan ruin. Her work begins in raw emotional and cultural inspiration and ends in vibrant abstraction.

Donley arrived at art by means of revelation after repeated misfortune. Taken from an abusive home in Dallas by authorities at a young age, she spent time in a Kentucky foster home and orphanage before trying her hand at college, dropping out and becoming homeless. Finding herself on the streets and addicted to drugs, she realized she was a lesbian and, after continued hardships, landed in San Antonio. In an interview this month with the San Antonio Current, Donley spoke about feeling transformed after she "discovered art as therapy."

After painstakingly tracking down her biological parents seven years ago while in search of her identity, Donley was awoken to the excruciating yet liberating fact that she, like so many others, would have to construct her own life without the guiding light of a family willing to see her through the darkness.

With her bright, gleefully idiosyncratic art — heavily influenced by her studies of (especially Mexican) pre-Hispanic art — as her focus, she gained a well-earned, and fortunately well-connected supporter, Leonard Rodriguez.

Now, working from and residing at a live/work space in the Gardens at San Juan on South Zarzamora, Donley is creating endlessly and seeking to grow her fledgling gallery, Zac Cimi Arte. In our recent chat, we talked about her background, the unique and appropriate name of her gallery, her altruistic aims and her methods as an artist and gallery owner.

On her opportunity to live and work at the Gardens at San Juan:

"A guy named Leonard Rodriguez [Westside Development Corporation president] approached me as a fan of my work and someone who appreciated my story. He asked if I might want to have a gallery and live at the San Juan Gardens and, of course, I accepted."

On her service-minded approach:

On the Zac Cimi name:

"Zac Cimi comes from Mayan mythology. The creator gods had four sons that were giants called Bacabs and their job was to hold up the four corners of the world. And the giant who held up the west side of the world was called Zac Cimi. So he was like a protector of the people and their part of the world. It seemed to complement my interests in pre-Hispanic culture and my sense of my role."

On her un-academic and organic process of creation:

"I don't like to paint at all. I don't have patience for things that take too long to dry. I'm not good at blending or shading or making things look realistic. I like the abstract. So I usually work on surfaces and with inks that dry very quickly and force me to get my ideas out quickly. And then, as I think is clear, I am fascinated in and deeply inspired by all types of pre-Hispanic art."

On her ultimate goals:

"I would love to become a nonprofit. I want to use my art and wow people with my art to draw them to community-centered events. I want to also provide a place for classes and resources to help people who are struggling, whatever they might be struggling with."

Through a mix of beaming positivity, non-profit events, community service, gallery exhibitions, performances and her own art, Donley hopes to see the seeds she has planted bloom and enrich the surrounding soil. In July, the gallery will be showcasing work by artist Blair Wilson. Anyone interested in showcasing, organizing an event at Zac Cimi, or visiting can contact Donley at zaccimiarte@gmail.com.