The Bad Plus Continues to Evolve on ‘Inevitable Western’ 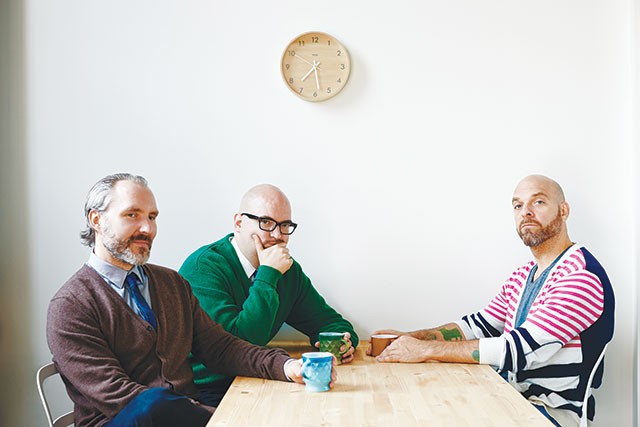 For over 14 years and 12 albums, pianist Ethan Iverson, bassist Reid Anderson and drummer Dave King have redefined the expectations of the jazz trio. Their sophomore release, These Are the Vistas, broke onto the scene in 2003 with technically deep, whimsically played Aphex Twin, Nirvana and Blondie covers intermeshed with equally enthralling originals that poked at conventions and shook up more adventurous listeners. Now, in support of this year’s Inevitable Western, The Bad Plus is set to play San Antonio for the first time.

A major key to The Bad Plus’ sound is in their longevity itself. In a phone interview with the Current, bassist Reid Anderson talked about the trio and their fruitful, ongoing creative relationship. “I think at this point, it’s sort of more interesting to talk about us in terms of us—we’ve been together for 15 years, made this committed music and, the truth is, the things that make it what it is were really there from the beginning. It’s not about, like, reinventing the wheel every time. I think it’s interesting because there really aren’t too many other groups out there who have done that, or are doing that, who are truly making this collective music together for such a long time.”

Contemporary jazz has grown to encompass many different ideas and sounds, but this Minneapolis-based trio may be the most instrumental act in changing the perception of the art. Now, other younger musicians, bright-eyed and bushy-tailed with their newly printed music school degrees, are riding the wave The Bad Plus helped instigate.

With longevity comes a signature sound. The first track on Inevitable Western, “I Hear You” (Anderson’s composition), is unmistakably The Bad Plus. The soft album opener is played in 5/4 over 4/4 polyrhythmic time that doesn’t distract from the tune’s sweetness for the sake of intellectual noodling.

“There are a lot of very specific polyrhythmic things in there, but we wanted to do it in a subtle way,” Anderson explained. “But there’s a lot of 5/4 and very specific things. We just thought it would be interesting to sort of incorporate those sort of seamlessly into a song.”

It’s smart without insisting on itself, through schizoid antics with time, stretches of simultaneous, chaotic soloing and just the constant damn fun in the midst of all those notes. Of course, don’t count out Dave King’s proclivity to be a complete monster on the drums. Stretch that notion out over a decade and a half, age it like fine bourbon and you have The Bad Plus. No one sounded like them all those years ago and, though some try, no one can now. You just can’t fake this.