Now in its second year, the Échale Festival on Labor Day is certainly one of the most fun and unique outdoor events happening in San Antonio this fall with a major focus on recognizing, fostering, and celebrating Latin American arts and culture in San Antonio and South Texas.

Free and open to families and revelers of all ages, the festivities will be going down at the Pearl Brewery between 12:30 pm and 6:30pm featuring several tables of food from Pearl Restaurant operators, art installations, and of course adult beverages from several local and independent breweries.

As for the music highlighting the afternoon, there should be plenty of dancing. DJ Manolo Black will be filling in between and during sets twice throughout the day, and set times for the bands, according to festival organizers, are as follows:

12:30-2pm | Los Nahuatlatos
From here in the San Antonio community, Los Nahuatlatos are an incredible sextet fusing traditional Latino sound ranging from conjunto to Latin jazz with contemporary elements of soul, ska, reggae and much more for an enchantingly groove-inducing effect they describe as “Xica-no Roots Fusion”. 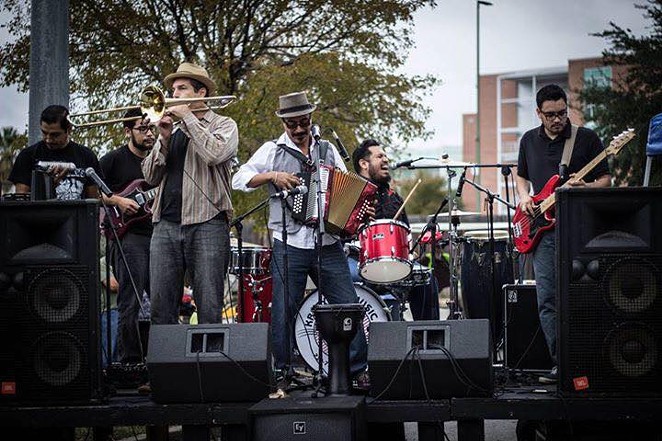 2:45-4:15pm | El Tule
Forming in Austin in 2004, El Tule takes the stage next with a huge sound produced from their 8-piece unit channeling a mixture of salsa, cumbia, reggae, and merengue styles into a high energy live presentation that has shared the same stage as the Gipsy Kings, Texas Tornadoes, and a number of other highly regarded acts over the span of their twelve-year tenure.

5-6pm | Money Chicha
Headlining and closing out Échale with a bang are Money Chicha of Austin, Texas who have been generating and blasting out an array of magnificently wild psychedelic cumbia songs and sounds since 2014.