The Bang Bang Bar Wants to Be Your Neighborhood Bar, San Antonio

It's long been a firmly held belief that San Antonio is a terribly friendly place to live. Tourists and newcomers comment on our polite predilection for holding the door open for each other, saying "excuse me" and "thank you," bidding good morning to folks we pass on the street — people we don't know and have never met. They compliment us on our willingness to help our neighbors — often with no benefit to ourselves — and on our nature to be sickeningly inviting. In truth, you can't turn a shot down from a San Antonian or forego tapping your glass on the bar for those not present without potentially offending the buyer (and the dead). Seriously.

This diaspora of kindness has been expounded upon to great extent by sociologists, historians, social commentators and the like. Citing our blue-collar roots, our position as a town with a laboring population; the syncretic mix of Europeans and Latin Americans forming a contact zone, or "melting pot," in the idealistic American rhetoric, makes us band together. It was natural, as San Antonio operated as an outpost for Mexico to the south, the frontier to the west and "civilization" to the east, that the mingling of cultures would occur. In fact, our diversity has, rather than pushed us apart, pulled us together into a new identity, the distinction of being San Antonians.

The perceived disregard of San Antonio in the national dialogue of places to live and exist also steels our deep-rooted belief in ourselves and each other, as a city — feeling less cool than Austin, less rich and racist than Dallas, less aggressive than Houston, and more puro than all of them combined.

This communal spirit of sharing, support and inclusivity lines the walls and furnishes The Bang Bang Bar, located at 119 El Mio Drive. The bar, which is open everyday from 2 p.m. to 2 a.m. and features karaoke on Sundays, DJs Monday through Friday and live bands on Saturday, desires to be nothing more than a welcoming place for San Antonians to come together and have a good time in a safe, inclusive environment.

The three owners of The Bang Bang Bar, Phanie Diaz and Jenn Alva, of San Antonio's successful indie trio Girl in a Coma, along with former Martini Ranch owner Jamie Hoppe, have joined forces to present a vinyl venue for the community that they feel incorporates the collective pride in our city and its inhabitants.

"We wanted a bar for the people, y'know? It's important to all of us that people feel like we really care about them when they come in here, because we do ... We want everybody to feel at home," Hoppe says.

Their policy of friendly respectfulness extends beyond just lip service, exceptional drink specials and the bar's policy of never charging a cover: during daytime hours, regulars can bring in their own records to play and Hoppe is currently working on a safe-ride program, wherein employees will carpool patrons to and from their houses — an idea of considerable merit in a city that has, in all practicality, a zero-tolerance policy.

The building, which sits just off of San Pedro* behind Roy's Taco House, was originally zoned to be a bar in 1938 and has operated as approximately 14 different drinking holes in its checkered history, which included a stint as a members-only establishment called Players that allegedly housed a prostitution ring from inside its labyrinthine walls. The space has also operated as smoky underground goth clubs Changez and Phazez (before goth was even referred to as such), Sluggo's, another dive-y punk rock joint, a staple of lesbian nightlife via the Bermuda Triangle, briefly as Boogie Nights and, most recently, as The Hideaway, a neighborhood sports bar. The assortment of facades and namesakes that have marked the life of the building are a further representation of San Antonio's confluence of tastes and sensibilities.

One aspect of the bar that many may deem unfortunate — its location — is something that the owners consider a positive attribute. Hoppe speaks to the fact that it isn't on the crowded stretch of the St. Mary's Strip that caters to much of the city's nightlife.

"We were looking for something that was still neighborhood-y. Not Downtown, not necessarily in the middle of the Strip, but a place that's established, that has stories and it has a crazy history," she says.

Hoppe elaborates on the vibe of the neighborhood and the patrons that have already come by to scope out their former favorite place, of one incarnation or another, to toss a couple back. "So many people walk through this door with an idea of what it was or what it would be and they all have stories to tell, which is fun and it helps add character."

This philosophy flies in the face of the popular, time-worn real estate cliché of location, location, location. In fact, although it may be seen as part of the element of risk that generally would hinder a bar's success, the location of the venue on a lazy span of San Pedro* adds to the homey feel, much like the nondescript corner bars in New Orleans, always modest and contained but packed with residents and neighbors. 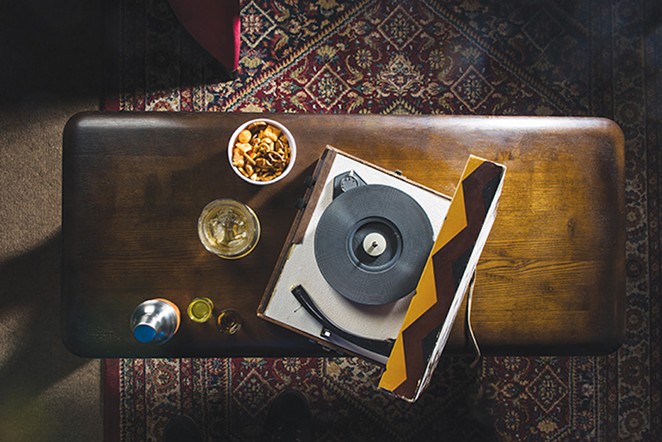 The drink prices and specials are also indicative of a working class town. The bar is supplied with four taps of rotating craft beer as well as the mainstays of Dos Equis and Bud Light and a growing number of cans, none over $4.50 and all from Texas, as well as an everyday happy hour (2 to 8 p.m.) that offers $2 wells and domestic longnecks. On "Texas Tuesdays," anything from the Lone Star State is on special. As the bar has just opened, they are also in the process of putting a small but mighty cocktail menu together and compiling a high-end selection of wines, whiskeys and liquors for the distinguished patron.

Although San Antonio can be inviting and inexpensive, we are not immune to much of the prejudice and ignorance that seems to spark the American imagination into doing despicable things. Hoppe often being asked to present the real (i.e. "male") owner of Martini Ranch and the Coma girls facing the obstacles that come with having to break the spell of the stereotypical rock band (four to five sexually assertive straight white males). The trio are constantly reminded of the generosity of San Antonio and its inhabitants, whether as bar owners or as a traveling band.

"It's like being in a band. The only reason we're successful is because of the people. It's passion. That's it. That's with the band, it's passion. We, like, put our hearts on our sleeve and see what happens," Alva says. "We didn't look the way you're supposed to look. We still did it. We did something. I think people can tell that when we do something we put our hearts into it."

The shared goals of The Bang Bang Bar — yes, it's named after the flannel speakeasy from David Lynch's Twin Peaks — are not mired in modesty, as Diaz elucidates. "I hope it becomes a staple of San Antonio and people just know that it's somewhere to visit ... hang out and have a good time and feel comfortable, and everyone know everybody ... I hope a year from now, it's just got its own thing going."

If the bar does become "a staple of San Antonio," it will, interestingly, do so because of the people it serves. In order to furnish the establishment with the tasteful and well-preserved lounges, sofas, love seats, tables and lamps situated throughout the bar — resplendent in the simple sophistication of being utilized and loved for a long, long time — the owners searched Craigslist and local thrift stores, bypassing Ikea and expensive antique handlers.

"The furniture that we did find, it was just kinda what we could afford. The things that we started to find started to come together," Alva remarks.

The wall behind the bar is bathed in neon lights that queer the ambers and sepias of the bottles sitting inside of old television shells. Diaz describes the process of furnishing the 3,500-square-foot space as a grassroots effort.

"It was just so cool to pick up all this furniture because we got to go to people's houses and they told us stories. Like, 'Oh, this was my mom's,' or 'We couldn't afford TV but we had family that worked at the department store, we got it and it's been in our family ever since.' It's just cool because it's more aspects of San Antonio inside the bar," Diaz says.

Alva adds, "It's like home touches in here. In the cabinet, my grandma made those dolls, some records on the wall are from Jamie's dad, my mom's records are up on the bar top. Just little things of ours that we're throwing in here for everybody to share."

As far as the operation of The Bang Bang Bar, from the first night of business (January 15) the bar's survival has been dependent upon friends and loved ones. Ray "Tattooedboy" Scarborough designed the logo and the faux movie posters advertising the theme of each night at the entrance, and the sound booth will be run by Diaz and Alva's litany of talented musician friends.

"So they all know what the bands want and what to look for. I made it a point to have friends that ... knew sound that could come in. And I'm learning, too, and so is Jenn," says Diaz.

"We're basically employing all of our friends," Hoppe adds. "I mean, literally, my very good friend did all the contracting work and he's not even a contractor, y'know? And then we've got another mutual friend in there finishing stuff out and their friends are running sound and doing gigs and all my friends are bartending. It's a very family-run bar."

Having owned and operated Martini Ranch, Hoppe has former customers that have followed her over to her new place, and they are mixing and mingling with the friends and fans of the Girl in a Coma rhythm section to create the atmosphere that the owners truly desire.

"We're gonna have to find a concept that will work for my old-timey regulars and the hipsters and the St. Mary's crowd," Hoppe says. "We have to bring all these people together. That's what I want this bar to be known for."

This is not just a flight of fancy, as Diaz is quick to point out, "When we first started a band that was one of our childhood goals. We'd be like, 'We're gonna play in a band and we're gonna own a business someday.' And then we just went and did it all."

As long as the trio maintains their sincere approach to satisfying San Antonio, the city should reward the women with their place alongside the bars that they revere. Places like Taco Land and Lerma's Nite Club, establishments that, despite the modesty of décor or clientele, were made better by the community they serviced. As far as where Alva, Diaz and Hoppe would like to be in a year, Diaz jokingly quips, "Hopefully, not so far in debt."

The location of the venue is off of San Pedro Avenue, not Blanco Road.