The Biden administration praised San Antonio for its vaccination gains, but Texas is lagging behind 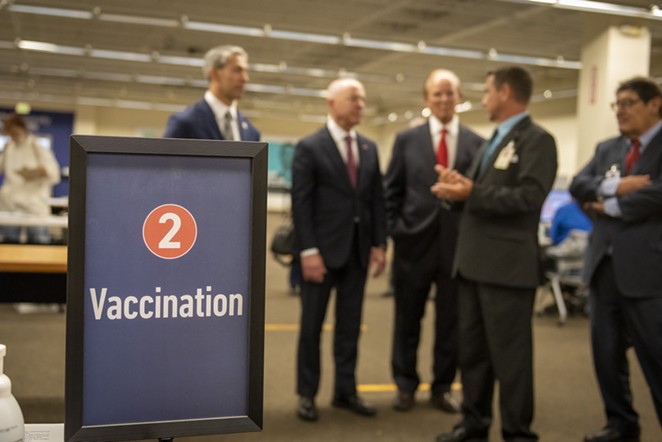 On Tuesday, Homeland Security Secretary Alejandro Mayorkas stopped in San Antonio to praise the city for exceeding the White House's goal of 70% of Americans being at least partially vaccinated by the Fourth of July.

"San Antonio is an example to the nation," Mayorkas tweeted following a tour of the city's Wonderland of the America's mass vaccination center.

He praised Mayor Ron Nirenberg and the city for exceeding President Joe Biden's challenge. At present, 73% of Bexar County residents 12 and older have received at least one dose, while just shy of 58% are fully vaccinated.

But the purpose of Mayorka's visit wasn't to blow sunshine up SA's ass. Instead, it was part of a push by the Biden Administration to catch Texas up with other highly populous states.

First Lady Jill Biden and Second Gentleman Douglas Emhoff also made the rounds this week, drawing in star power from retired Dallas Cowboys running back Emmitt Smith to urge Texans to step up for their jabs.

At present, some 11.9 million Texans have been fully vaccinated, and while that sounds like a lot, it accounts for just 41% percent of eligible people in the state, according to Centers for Disease Control data.

Experts estimate that 70% to 90% of the population needs to be vaccinated to effectively curb the spread of COVID-19.

Further, they warn that vaccination rates must rise to slow the spread of the more-contagious Delta variant, which now accounts for one in five U.S. cases. Experts including former FDA chief Scott Gottlieb have warned schools could become "a focal point of spread” if more adults don't roll up their sleeves.

The Lone Star State currently ranks 34th in the nation of percentage of eligible people who have been fully vaccinated, stuck between Kansas at 33rd and Arizona at 35th.

In contrast, the nation's other most-populous states are far higher up the list, according to CDC data.

"At this point in the pandemic, the most consistent trend that we see in people who are being hospitalized, being admitted for severe COVID-19, is people who are unvaccinated," Dr. Jason Bowling, an epidemiologist with University Health hospital in San Antonio, said in a YouTube video posted by the hospital. "It's very uncommon for us to see someone who is fully vaccinated to be admitted with COVID-19 at this point."