The 'Black and Tan Fantasy' of San Antonio's Keyhole Club 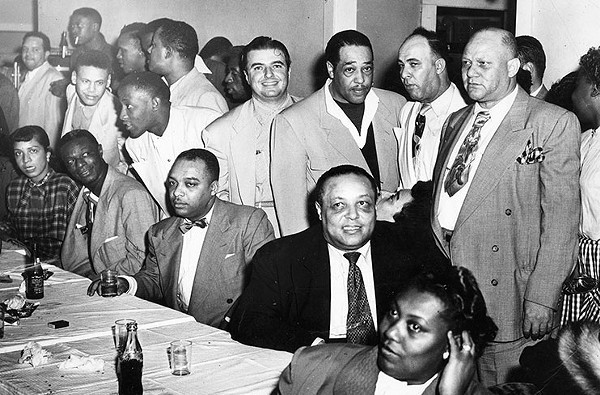 It started with a picture. Not a remarkable one at that, just a crowd of old-timey-looking men stuffed behind a table. Of course, two of those men are unequivocal jazz legends. The first, standing third to the right in those killer lapels, is Duke Ellington, arguably America's greatest composer and bandleader. The second, perched down at the end of the table and appearing to stare back up at Duke, is Nat King Cole, who remains one of the most recognizable voices in jazz and beyond. So what were two jazz stars doing together in San Antonio this particular night?

The shot, taken from the UTSA Digital Archives, dates from November of 1955. Its caption offers only a little more context: "The Photograph shows gathering at the nightclub following Cole and Ellington's midnight appearance at Majestic Theater for showing of movie Rock N' Roll Revue that they starred in."

It had been three years since Duke last came through San Antonio, bringing in his Orchestra for a "One night engagement at the Club Seven Oaks off Austin Highway." Of course that trip was best remembered for what happened after the gig, when Duke headed over to the Silver Slipper Club, only to get arrested on liquor curfew laws alongside the manager of the Harlem Globetrotters. As for Nat, there's no record of any prior trips through the Alamo City, or at least none that resulted in a police report the following day. So what brought them over to this little nightclub that November night?

I asked famed local jazz musician Jim Cullum Jr. to help fill in the blanks a bit more about the photo. The answer, he says, stands next to Duke, in San Antonio-via-New Orleans club-owner Don Albert. 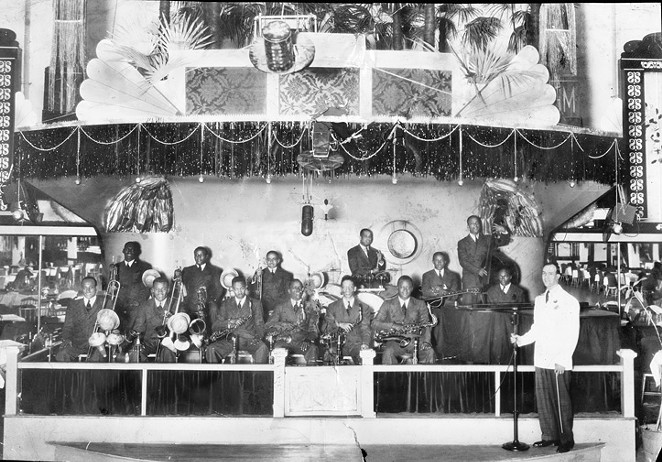 "Don was a sort of minor jazz figure, a bandleader, disc jockey and master showman. He really made the Keyhole the spot to go whenever (jazz musicians) were in town. So it makes sense that Nat and Duke probably stopped in to have a drink after the show."

During its heyday, the Keyhole welcomed the likes of Louis Armstrong, Sarah Vaughan, Slam Stewart and Louis Jordan, many of whom are featured in other photos from the UTSA archive. Trombonist Gene McKinney, in this interview conducted by the Institute of Texan Cultures in 1980, recounts another memorable jazz giant dropping into the Keyhole.

"I remember that Dizzy Gillespie came here with his big band and played a concert at Municipal Auditorium while we were working at Keyhole. And they, of course, used to have 'after parties' anytime there was a concert and everybody'd go to the 'after parties.' Dizzy and all the guys came down to The Keyhole. Three or four of the guys played and Dizzy was clowning around the place."

It wasn't Albert's charisma or the drink prices at the Keyhole that made the club such a go-to spot.

"(Albert) always ran a 'black-and-tan,' meaning he'd never restrict who could or couldn't get in, black or white, didn't matter," says Cullum. "He even had white players like saxophonist Zoot Sims in the house band. That was incredibly rare back in the '50s, especially in the South."

The key for Albert was to take advantage of the Alamo City's unique demographics.

"You had a lot of Air Force and Army people stationed in San Antonio that weren't from the South and weren't the least bit uncomfortable with an integrated club," Cullum says.

Outside of the Keyhole's clientele, however, the club was making plenty of enemies for its open admission policy.

"There was this Police Commissioner, (George) Roper. He didn't like the integrated part of the club," says Cullum. "He used to raid the place all the time, saying they were violating liquor laws, and take everyone to jail."

After Roper attempted to have the Keyhole condemned by the city building inspector, Albert took the case to court. Incredibly, he won. Here's Albert himself, recorded in a 1980 interview.

"(The judge) said there's no laws in the State of Texas that prohibits the congregation of people regardless of race, creed or color. And then I was in no violation of any laws. Case dismissed. So consequently any place that wanted to accept the people as I accepted them...whites, blacks and all that, whoever wanted to enter the doors, it was acceptable then after the decision was made."

The 1954 ruling, delivered a full decade before the Civil Rights Act, represented a landmark decision for the still deeply segregated South Texas region. With his newfound legal protection, Albert was able to keep the Keyhole running until 1964. The building still stands on Poplar St. just west of downtown, acting now as the Cruz Blanco Fraternal Society Hall. As for Duke, he'd come back into San Antonio just one more time. That 1972 gig, a one-nighter at the now defunct Randy's Rodeo, came just two years before his passing.