The Case For Gwar As The Greatest Band In The Universe 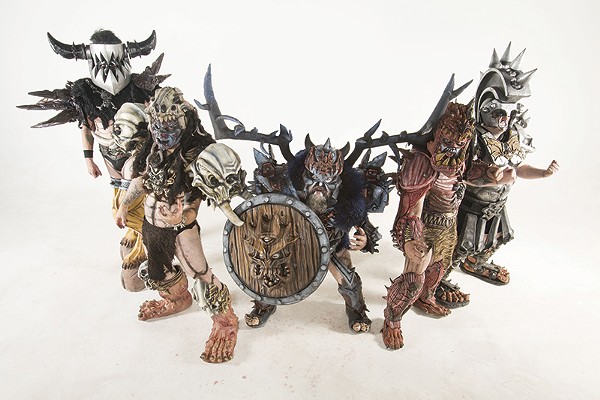 Soon after Gwar's Pustulus Maximus answered the phone, I knew I had not prepped right for the interview. After cordialities, I jumped into an introductory round of questions for the guitarist of the world's fake-bloodiest, most theatrical band.

I was promptly interrupted.

"Let me back up for one second, are you interviewing me, or the character, or both?" asked Brent Purgason, the man behind the Pustulus mask.

It was a layering I had not anticipated. Through Gwar's 30-year history, its band members have dressed in flayed and decayed costumes pulled from a complex band mythology. Of course they have a character headspace to slip into as well.

"The old way was drink a bunch of beer and that's how you get into the character," said Purgason. "But nowadays, I'm absolutely comfortable. Really for me, it's just putting on the mask.  As long as I can put the mask on, I am that dude."

The man is Purgason, a tested guitarist in death and thrash metal with a humorous wink. From 2010 to 2014, Purgason played lead guitar in Cannabis Corpse, a weed-themed trio (riffing off the name of Buffalo death dealers Cannibal Corpse) with tunes like "Baptized in Bud" and "Shatter Their Bongs."

The mask is Pustulus Maximus, a horrid costume from head to toe. Covered in sores, Pustulus wears a loin-cloth, a skull-helmet and shoulder armor skulls that look like a cross between an elephant and Ridley Scott's Alien. He's got Sharpied-on ab demarcations and his face is an unsettling blue, potholed with a case of acne from hell.

"When [I'm in] in character, I don't feel good unless I'm making myself uncomfortable," said Purgason. "That's how I know I'm doing a good job. If I'm saying things that would make me blush outside of that, I know I'm going in the right direction."

There's plenty of blush-worthy material in the Gwar folklore to fall back on. The immortal "Scumdogs of the Universe," Gwar was banished to Earth after a failed coup against its interstellar Master.

"Pustulus was first on Earth with the rest of the Scumdogs that were frozen in time," explained Purgason. "He was in the closet taking big bong rips trying to hotbox it and when everybody got thawed out, they left him. They didn't know he was still back there. Pustulus got out and wandered around Antarctica for about 20 to 30 years and then went home."

Here, in this roaming backstory, one can make the case for Gwar as the greatest band in the universe. Time freezing and thawing, fake blood oozing by the gallon, a Grammy-nominated longform video called Phallus In Wonderland — no other band goes so far out of its way to make a spectacle of itself. That $17 ticket price goes a lot further than the average band, building and maintaining the props and fluids produced by Gwar's production company, the Slave Pit.

Most bands rely on a key member, or a dynamic between marquee talents, to maintain a career's momentum. But Gwar has never been restrained to this form of mortality. With 30 musicians subbing in and out of the band in its 31-year vocation, Gwar's legacy is in the blood-spurting, thrash-theatre of the live show.

But in March of 2014, Gwar suffered a very mortal blow. Frontman David Brockie, the man behind the mask of Oderus Urungus, overdosed on heroin in his home in Virginia. Since 1986, Brockie had been the vile spokesman for the band, spewing the story of Gwar onstage, on MTV and, oddly enough, as a frequent guest on Fox News' Red Eye. In retrospect, Brockie's frequent jokes about crack use feel pretty morbid.

"It's a lot quieter for sure," said Purgason. "He was the loudest dude in the room no matter what. I miss that so much, but I think we're doing a good job keeping that dream alive and doing it for him as well as doing it for ourselves. Because we're here and we gotta do what makes us happy on top of trying to preserve this legacy the best we can."

Through Brockie's death and a caustic legal battle with his family, Gwar continues on, trying to get back to the brutal plane in which it's most comfortable. For the current tour, Purgason guarantees the expected "murder, blood death and mayhem" of a Gwar outing. In an election season, the band's tradition of mutilating prop celebrities takes on an interesting bent.

Scumdogs, if you're reading this, for the sanity of American politics and the good of the Grand Old Party, please dismember and de-wig a Trump doll for 2016.