The Chow Train Rolls On Through Legal Battle

After press time, the City of San Antonio announced in a news release Tuesday evening that it would dismiss Joan Cheever’s citation:

“Because the City’s food and mobile vending regulations do not address feeding the homeless and in an effort to move forward with the larger discussion, the City announced today it is dismissing the citation issued to Joan Cheever for serving food from her personal vehicle instead of the mobile food truck she is permitted to operate,” the news release said.

Joan Cheever gave this statement to the San Antonio Current:

"I’m happy to hear that the City realized that the people of San Antonio will not stand for prosecution of this sort. It was and is an unjust prosecution, but the ordinance is still on the books and unless it’s repealed, there could be more litigation coming, and the City is very aware of that."

Our original story continues below.

It's 9 a.m. on Tuesday, July 7, at the Municipal Court on Frio Street. About 20 people are packed into courtroom 7, most of whom are likely fretting over fire code violations, noise complaints, or other garden-variety citations that make up the daily docket.

But Joan Cheever, sitting in the front row, dressed in a pink chef's coat, is worried about her Guinness stew. It's been braising for 16 hours, the centerpiece of the meal she plans to serve tonight to San Antonio's hungry — just as she's done almost every Tuesday night for years.

Cheever, 57, runs The Chow Train, a nonprofit mobile meal service. She prepares and serves over 100 free three-course meals each week for "people who fell through the cracks." She's also taken The Chow Train to disaster areas, providing meals to victims and aid workers.

"To me, it's just compassion. I can't stand to see people go hungry," Cheever told the San Antonio Current at her house. "It's more than just a plate of food. They tell me it's a plate of love. I think this is the greatest way to show someone that they're a person. They're not invisible."

But on April 7, cops ticketed Cheever for operating a food truck without a permit. She was issued the $2,000 fine for serving food from a pickup truck instead of the food truck trailer itself, which she sometimes leaves behind due to space constraints.

Cheever has waged a months-long fight against the fine. Last week at court, she rejected a chance to settle with the city, opting for a jury trial on September 23. Until then, she plans to stick to her mission – feeding the hungry. 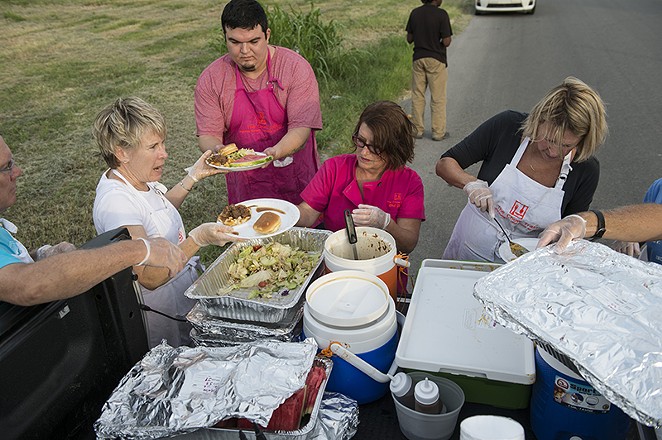 A Form of Prayer

Cheever, diminutive and feisty to a fault, is an attorney and former court reporter who once served as managing editor at the National Law Review. She credits her altruism to her upbringing.

"We were taught to volunteer and give back to those who are less fortunate," she recalled.

For Cheever, who grew up Roman Catholic, feeding others is an expression of her faith. It's a form of prayer, one she favors over sitting through Mass each week.

"I was raised this way and this is what we're supposed to be doing. It's communion with the community and it's the way I pray," she said. "I pray quietly."

The prayer is in the process, she says. But that's not an argument that resonated with the San Antonio Police Department on April 7 when they ticketed her — about a week before the start of Fiesta.

It started as an ordinary Tuesday night for Cheever. She was working in Maverick Park, the last of The Chow Train's four stops, when several cops approached her.

This wasn't uncommon. Cheever said that officers often drop by the park on Tuesdays to check in with her. Their interactions were always courteous, if not congenial. She even offered them food sometimes.

The 14-foot-long food truck trailer is too bulky for some of The Chow Train's routine Tuesday stops; logistically, just using the pickup makes sense. And all of Cheever's food is meticulously handled, labeled and checked for temperature.

But the cops still ticketed Cheever for serving food out of a private vehicle, fining her $2,000. The official offense is a violation of Code 13.62: no valid mobile food-vending permit.

When she cited the Texas Religious Freedom Restoration Act — that the act of cooking and serving food for her was a form of prayer and Texas law allowed her to do so — one of the officers told her: "'Lady, if you want to pray, go to church.'"

Even after the run-in, Cheever doesn't harbor ill will toward SAPD or the officers who ticketed her. But if what she's doing is illegal (she hasn't missed a Tuesday night in Maverick Park since being fined), then why hasn't she been ticketed again?

City officials did not respond to the Current's repeated requests for comment on this and other questions.

"Our public health safety code is in place to ensure that all people in San Antonio, homeless or otherwise, are served safe food," city spokeswoman Di Galvan told The Texas Observer.

Bill Holler, director of Under the Bridge, a non-profit service that feeds about 150 homeless people in San Antonio every week, said that ticketing Cheever was "silly."

"There's so many people doing bad things out there, criminals. They should spend more time chasing them down instead of bother people trying to be good Samaritans," Holler told the Current.

Had Cheever accepted the plea deal on July 7, the fine would have probably gone away. But that would have meant shuttering the current iteration of The Chow Train — something Cheever never considered, according to one of her attorneys, Stephanie Stevens.

"Because Ms. Cheever is adamant about her innocence and her cause, we rejected the offer," said Stevens, who's representing Cheever for free.

Instead, Cheever insisted upon a jury trial — a strategy she thinks will not only exonerate her but will catalyze a discussion about how San Antonio treats its hungry and homeless.

Bexar County Commissioner Tommy Calvert Jr., a member of The Chow Train's board of directors, has known Cheever for several years. He scoffed at Cheever's citation.

"It's about the most ridiculous waste of government time I've ever heard of," Calvert told the Current. "These folks are extremely grateful, you can see the looks on their faces. Other places, they just give you a number and here, you can tell they really care." 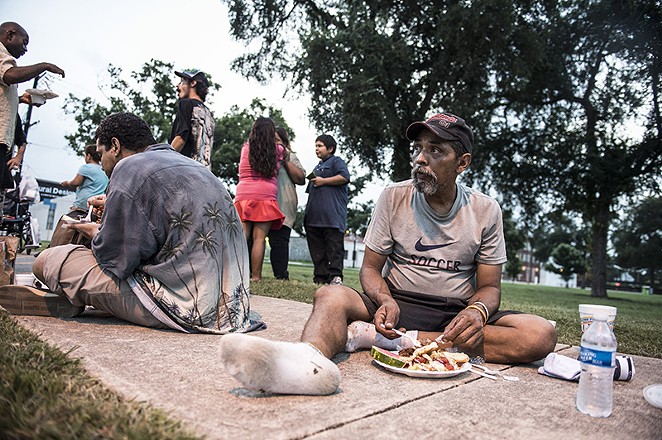 Though much of the physical work happens on Tuesdays, Cheever's husband, Dennis Quinn, said that their lives tend to pivot around planning for the weekly meals.

"We start thinking about it on Thursday. But it seems like it's constant," said Quinn, who describes himself as the "chief bottle washer."

To prepare a three-course meal for over 100 people, Cheever enlists the help of a rotating cast of volunteers. Interest in lending a hand has exploded due to attention from the ticket.

Over 65,000 people have signed a petition on change.org to "allow good Samaritans to feed the homeless without being fined" in support of The Chow Train. Cheever has also raised over $14,000 on the crowdsourcing site GoFundMe for operational costs.

Cheever's meals aren't hastily-assembled bologna sandwiches and Capri Suns. She holds an associate's degree in culinary arts from St. Philip's College and estimates that the meals she makes would run about $20 a plate in a restaurant.

Cheever's menu varies, depending on what's in season and what donations she receives. But she follows a few basic guidelines.

Vegetable soup is always on the menu. And she favors softer foods — stews, mashed potatoes, roasted vegetables — so that the homeless, who often have dental problems, can eat the meal.

Most Tuesdays for Cheever start at the Olmos Basin Farmer's Market. Held Tuesdays and Saturdays just west of The Quarry, it's small but regulars file through in a steady trickle.

Cheever tries to pay the farmers for their goods (and occasionally succeeds in pressing a rolled-up $5 bill into a palm) but most of them are eager to donate surplus veggies.

"We don't have much, but we give her something every time. If she can use it, we give it to her," said Horacio Zamudio, a farmer from Natalia. "It feels good to do something for other people."

Last week, Cheever and Warren Monnich, one of The Chow Train's volunteers, left Zamudio's stall with dozens of marble-sized multicolored tomatoes, a few plastic bags of okra and a toddler-sized watermelon.