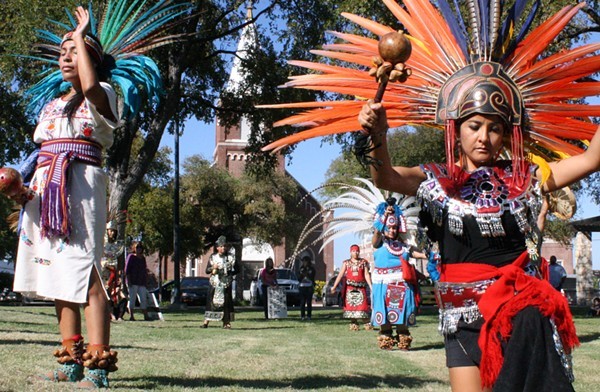 Monday was Columbus Day in San Antonio — as it's been since the 1940s.

In a move that almost seems unrelated, the city will be making a 2 p.m. proclamation Thursday making Oct. 12 Indigenous People's Day. According to District 1 spokesman Justin Renteria, the announcement will be followed by an smudging ceremony as well as "readings, music, and dancing." It's unknown how many members of the council — or if the mayor — will be in attendance.

In the past three decades, more than 50 cities, counties, universities and states have replaced Columbus Day with Indigenous People's Day, in an effort to acknowledge that Christopher Columbus' "discovery" of America kicked off a mass genocide of Native Americans. This hasn't been the case in San Antonio.

In 2015, Bexar County Commissioners Court issued a proclamation making Oct. 12th, 2015 Indigenous People's Day, but Monica Ramos, county spokeswoman, confirmed in an email to the Current that these proclamations are only done for that single date, "not in perpetuity." And in 2016, the San Antonio City Council, who promised local native leaders they'd rename the day, appeared to have forgotten about it entirely.

For at least a decade, local Native American groups have been pushing the city and county to replace Columbus Day (traditionally the second Monday in October) with Indigenous People's Day. This year, despite this yearly request from native groups to rename the day, it appears city officials are attempting to have both polarized days exist in the same week.

"We've got the runaround from the city from the beginning," said Frankie Orona, executive director of San Antonio's Society of Native Nations. "They want to ignore the main issue, and hoping we'll just settle with that."

According to Renteria, the city decided against following other city's footsteps in getting rid of Columbus Day "in order to allow each group/culture to celebrate and not have it be at the expense of the group’s other celebration."

The only apparent Columbus Day celebration going on this week took place a day early at the Christopher Columbus Italian Society, where members held a spaghetti dinner. No other groups were openly celebrating the holiday.

Orono says a number of native rights groups will be attending the city's event — but not just to participate in the smudge stick ceremony or to dance.  Instead, some leaders, including Orono, will speak out in opposition to the city's unclear decision. Antonio Diaz, a native rights leader who's been pushing for Indigenous People's Day the longest, will also speak at the afternoon event. Diaz did not return the Current's calls for comment.

In August, Orono watched the city vote to remove the Confederate statue towering over Travis Park. To him, that was a sign that symbols and statues praising the people who oppressed his minority community would soon be next. But, for now, the city's avoided citizens requests to erase Columbus Day and dodged petitions to remove the statue of Christopher Columbus from downtown's Columbus Park — a park many also would like to see renamed.

"Why not give the same sympathy to native people?" he asked. "If there was any time for this day to be renamed or this statue removed it would be now."