The complete 'All in the Family' is out on DVD 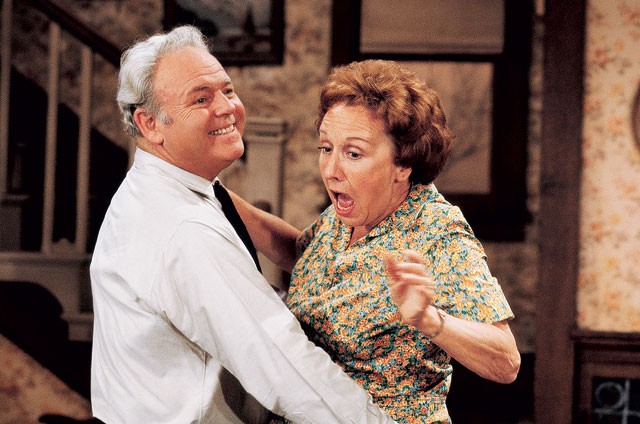 All you need to know about All in the Family is in its first episode aired by CBS on January 12, 1971. That episode introduced an ultra-conservative Archie Bunker and his takes on sex, religion, and politics, in a lethal satire of bigotry that was unprecedented for U.S. prime time.

"I had no million people marching and protesting to get me my job!" screams Bunker (a magnificent Carroll O'Connor) after his "meathead Pollack" son-in-law Mike Stivic (Rob Reiner) objects to his dismissing of Blacks as "black beauties."

"No," agrees his wife Edith ("the Dingbat," an equally marvelous Jean Stapleton). "His uncle got it for him."

In a later episode of that glorious first season, Bunker goes on complaining about the fact that, in his time, we were all "Americans," not Chicanos, Mexican-Americans, or African-Americans. "After that, if a guy was a jig or a spick, it was his own business."

For the first time, all nine seasons of All in the Family (1971-79) have been released on a single DVD set and with complete episodes (unlike the edited ones seen on network reruns and syndication).

The show was the creation of Norman Lear, who was inspired by the '60s British comedy Till Death Do Us Part and by his own father, who, in Lear's words, was a replica of Archie Bunker. O'Connor and Stapleton nailed their auditions immediately, but two pilots were made with different couples before Gloria (Sally Struthers) and Mike were cast as Bunker's daughter and son-in-law. Those pilots (Justice For All and Those Were the Days, the original tentative title of the series) are included in the box, which is superb but also confirms what anyone can tell by watching reruns: the series lost some of its steam towards the end, especially after Mike and Gloria moved out of the house. The spinoff series (Gloria, Archie Bunker's Place, and 704 Hauser, the pilots of which are included in the set) just weren't in the same league. But the chemistry of the four main characters, the quality of the writing through most of its run, and our fascination with one of the biggest loveable jerks in TV history haven't diminished a bit after 41 years.

All in the Family became the first TV series to lead the ratings for five consecutive seasons (only matched by The Cosby Show, though surpassed by American Idol). In total, the series won 22 Emmys (one of only three sitcoms in which all lead actors won Emmys, the other being The Golden Girls and Will & Grace) and seven Golden Globes.

"[Archie Bunker] reacted out of fear, not hate," Lear remembered. "He would have never thrown a neighbor out or signed a petition to have him out because of the color of his skin. This was just someone who couldn't live with the way the future was incrementally becoming part of his life."

"We felt that if we were truthful, honest, and accurate, the result would be acceptable," said Stapleton.

All in the Family was all that, but mainly it was just funny as hell.

All in the Family: The Complete Series