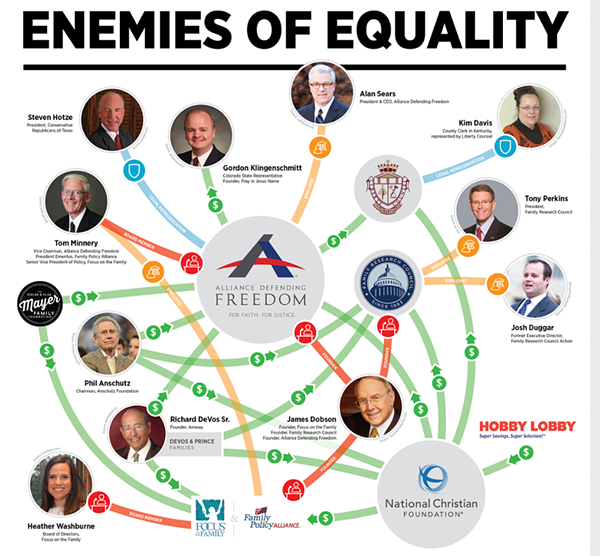 A new infographic published by Freedom for All Americans shows the complex relationship between a handful of billionaires and religious-based anti-LGBT groups that has worked to introduce more than 200 discriminatory bills into legislatures in 34 states so far this year.

Freedom for All Americans is a social welfare organization that is campaigning for the implementation for non-discrimination protections for LGBT people nationwide.

The infographic displaying the web of people, businesses and nonprofits involved in anti-LGBT efforts comes a week before a congressional House committee holds a hearing on the First Amendment Defense Act, federal legislation that would allow businesses and government contractors to deny services to LGBT people. That legislation is backed by the group at the center of a vast network that Freedom for All Americans has dubbed the Enemies of Equality — the Alliance Defending Freedom (ADF).

The ADF is a Christian activist organization founded by James Dobson and Alan Sears that promotes anti-LGBT policies by filing lawsuits and providing policy language, testimony and legal analysis. The ADF has relationships with multiple anti-LGBT organizations, including The Family Research Council and the Family Policy Alliance — both founded by Dobson. Those groups provide grassroots and online organizing in what Matt McTighe, executive director of Freedom for All Americans, describes as a coordinated attack on LGBT communities across the country.

"Over the last several months it's become clear that the incredible number of anti-LGBT bills we’ve seen pop up in state legislatures across the country this past year isn’t some spontaneous, organic attack on our community," McTighe says. "These anti-LGBT bills stem from a coordinated effort directed by a handful of well-funded national organizations leading a vast and deep-pocketed mission to demonize and harm gay and transgender Americans."

In Texas, the ADF has defended Steven Hotze, who sued Houston over its now defunct non-discrimination ordinance. Attorneys in the Lone Star State that are allied with the ADF include Kelly Shackleford, who runs the First Liberty law firm, which "defends" religious liberty, and two of its former employees, Jeff Mateer and Hiram Sasser, who Texas Attorney General Ken Paxton hired after taking office. Paxton also hired Austin Nimocks, a former ADF attorney, who is the lead attorney in the lawsuit Texas filed that is challenging federal protections for trans kids in schools. Lastly, there's Jonathan Saenz, who runs Texas Values, a "family policy council" group in Texas. Over the years Saenz has said that LGBT activists want to put Christians in concentration camps and that same-sex marriage means people will start tying the knot with their stepchildren.

"These aren't new actors — they're an expansive network that previously worked to discriminate by denying LGBT people the freedom to marry. Legislators should not be fooled — these organizations are old hands at this work and they know exactly what they’re doing," McTighe says. 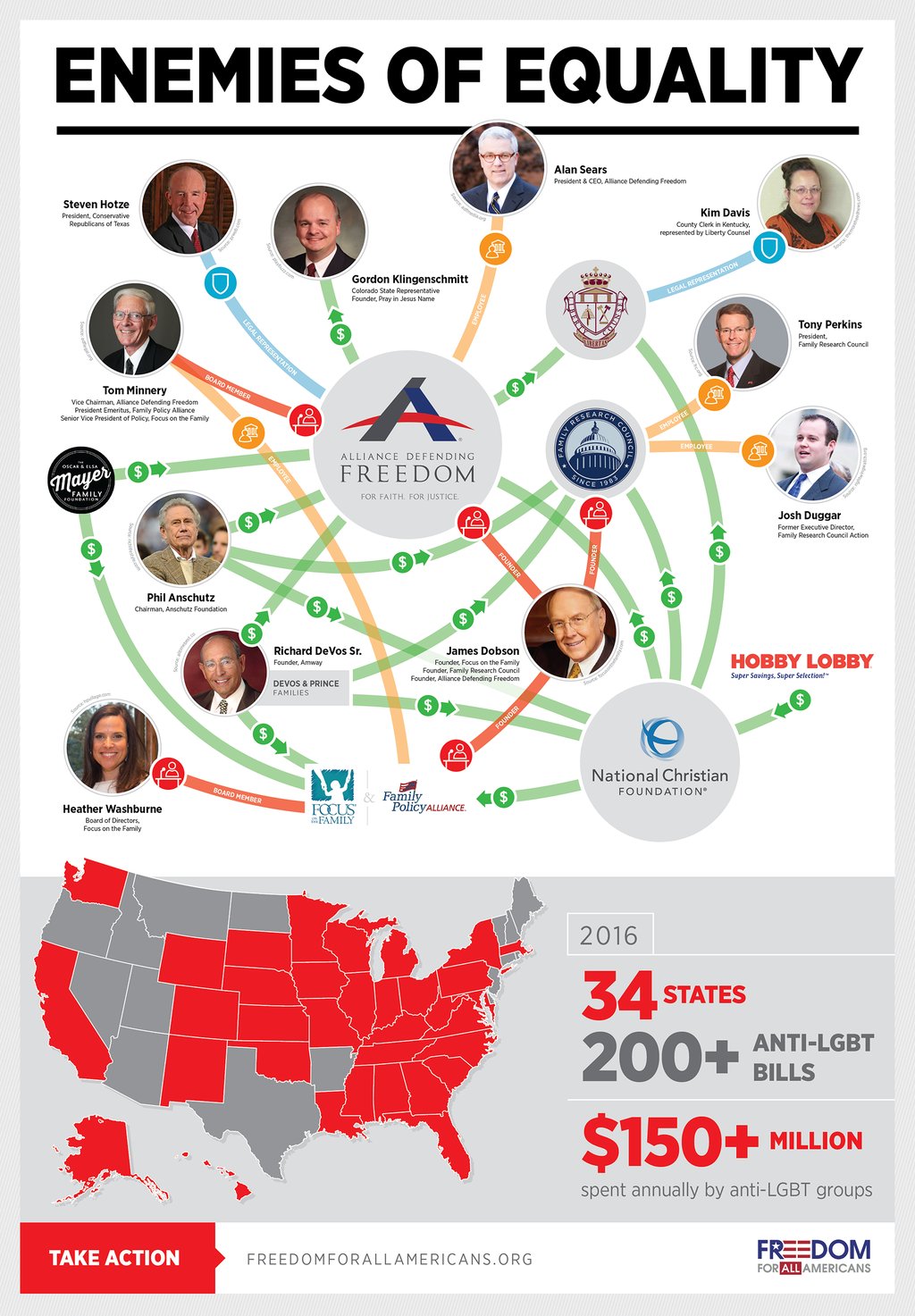