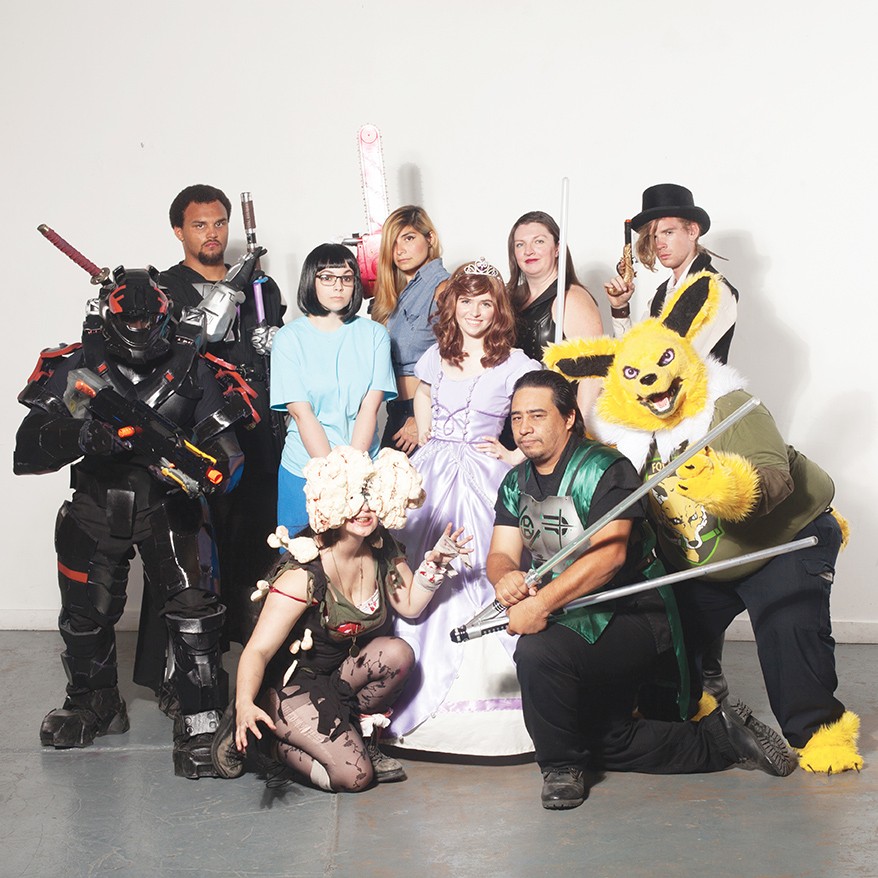 People of San Antonio: Pikachus are coming. Get ready for Gokus. Brace yourself for Batmen. It's time for San Antonio's largest convention of all things nerddom.

San Japan will take place from Friday through Sunday with events split between the Grand Hyatt and the Henry B. Gonzalez Convention Center.

This year's event promises to be the biggest yet; what was once a convention of less than 1,000 attendees has exploded to nearly 20,000 people.

"San Antonio has a really strong fandom population. Lots of people are into anime; it's become more mainstream over the past few years," David Ramirez, community relations director for San Japan, told the San Antonio Current last week. "It's not something that just geeky people are into on the weekends."

San Japan's hundreds of events run the gamut from panels on costuming and crafting to concerts and dance parties, meet-and-greets with voice actors, quiz shows and trivia contests. And it's not just anime — the convention flirts with all facets of internet, pop and Japanese cultures.

Ramirez said that what separates San Japan from other conventions is our unique setting in SA.

"Other cons are in the airport hotel or the hotel on the outskirts of the city," Ramirez said. "The fact that we're able to be downtown ... that makes it so much more of a destination."

But what brings a convention like San Japan together — and what many of its attendees obsess over for months in advance — is cosplaying.

"The costumes are definitely one of the big focal points," Ramirez said. "We have people who come out just to show off their costumes."

Cosplayers are a dedicated lot. It can take many a bleary-eyed night over a sewing machine or a hot glue gun to get a stitch or part of an accessory just right.

But as most any cosplayer will tell you, it's worth it in the end. Besides, what would a convention be without a dozen Deadpools running around causing hijinks or a full set of the Sailor Soldiers?

Here's a look at some local cosplayers hitting San Japan that talked to the Current about how they got hooked and what they've got planned for this year's big confab.

For Molly Gilford, the weirder the costume, the better.

She has made costumes since she was a freshman in high school and even designed outfits for Six Flags. With plenty of experience under her belt, she's now looking to expand her repertoire.

"There are so many weird designs that people have thought up in anime or video games and it's a real challenge to make those real," said Gilford, an accountant. "I've started gravitating toward how I can challenge myself."

Gilford will cosplay as Freeza from the Dragonball series at San Japan. It's a tall task; she's had to create a "crazy helmet" from scratch and figure out how to make an articulated tail. She enlisted an engineer friend for the latter portion, eventually tweaking his design with her own personal touches.

Gilford typically sticks with characters with which she's familiar. The freedom to dress as whomever she wants and the community's inclusiveness is one of the reasons she's such an avid cosplayer.

"There's an unspoken kind of thing in the cosplay community that you can dress up as whatever you want. It doesn't matter what your gender or skin color is, if you want to wear it, you can wear it," Gilford said.

And as with many cosplayers, it's not just about putting on the costume — it's what you do with it, how well you embody the character.

So it's no surprise that when a friend from school introduced her to cosplaying four years ago, she was hooked from the start.

"Sharing my work with other people and getting to talk to people from all over the world about the stuff they've created and how far they've traveled, it's so fun for me," Martin said.

Martin, who goes by the nickname "Sonny Joon" in the cosplay community, is a Northeast Lakeview College student and Starbucks barista.

Martin progressed from salvaging much of her costumes from thrift stores to making them by hand. Although she's taught herself much of what she knows, Martin also credits some of her costuming ability to her seamstress mother.

"I guess watching her for so many years, I picked up a thing or two," Martin said.

She favors characters from comics and video games, though she'll dive into almost any medium. She's cosplayed as characters from a wide range of series and shows — from Orange is the New Black to Archer to Batman and most anything in between.

But her favorite cosplay she's made thus far is Daenerys Targaryen from the Game of Thrones television series. She's making another Daenerys costume for San Japan — one of four outfits she's creating for the convention.

Rafael Garza has been an avid comic collector for as long as he can remember. A Star Wars fanatic, he started cosplaying about two years ago.

Garza started small. He'd throw together a costume with whatever he had around the house. Now he's adding his own intricate touches, customizing looks for his favorite characters from the Star Wars universe.

"I want to stand out from what everyone else looks like," said Garza, who own a small-engine repair service. He's currently repurposing Old Republic-style armor he made (complete with a chestplate he repurposed from a mannequin) to look more battle-worn. It's a lot of work, but the end result is worth it.

"It's great when you actually get to look at something you've done at the end, and say, 'Wow this is something I made.' But the best part is when you put something on and people automatically recognize you. When they say 'I know who you are!' That's awesome," Garza said.

He also cosplays altruistically. He helps run Heroes and Villains of Cosplay, a San Antonio-based group. They came together through their love of all things Star Wars and though their interests have since broadened, the Lucasfilm universe remains their bread and butter.

They sometimes visit children's hospitals in costume and perform skits and lightsaber battles for kids.

"My favorite things have been my Star Wars stuff, because I get to perform a lot with my saber ... and the crowd seems to really like it," Garza said. "Any sort of charitable event, that's a lot of what got me into it too, giving back to something."