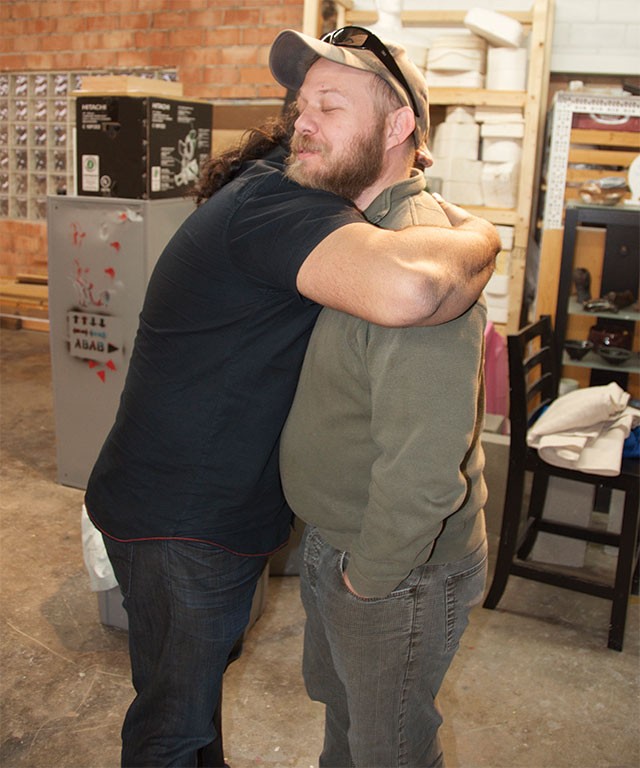 There’s something truly magical about being in the studio with an artist. It’s the incubation space that allows them the freedom to create. Visiting with an artist in this space is not only an incredible privilege, but an intimate and endearing one. Last week I was lucky enough to get into 10 studios; this week there were fewer scheduled, but they were no less gratifying.

As an added treat, one of my dearest friends, Jaclyn M. Alderete, now the director of marketing and communications for New York City’s Snug Harbor Cultural Center & Botanical Garden, was able to visit studios with me. This week, Jaclyn and I jumped into artist Chris Sauter’s car and drove from studio to studio in what Jaclyn likened to a Thelma & Louise-type adventure (yes, Chris, you are indeed the Brad Pitt in this scenario).

We popped in to visit with Wesley Harvey, and I wanted to take every one of his naughty ceramics home with me. We talked about the mix of kitsch, queer theory and the historical reference of traditional ceramics. We discussed the implied delicacy of the medium, gay culture and all the subsets of human sexuality in general.

We went to Karen Mahaffy’s beautiful space and learned about focus and patience. She told us about how she waits hours for the perfect combination of light and shadow to occur. Mahaffy’s process is dependent on her patience; finding the right moment to interject the narrative she is looking to explore. Our next visit reminded me of an evening in 2013 when I was on your typical Second Saturday trek. I had stumbled into a studio that was left open by the artist (who was nowhere to be found). Lying around the studio were delicately stained and stitched lace cloths that were both elegant and fragile. The artist’s craftsmanship was so profound, but there was no one around to ask who had made the pieces. I stumbled upon them again, almost exactly one year later, when I walked into Julie Ledet’s studio this week. Ledet is a photographer by trade, but made these works to discuss her history and upbringing in a strict Catholic household. Her version of Catholicism was heavily influenced by her native New Orleans folklore, and she used her work as a medium to tell these stories.

After spending more than an hour talking with Ledet about religion, history and local folklore, we sought out Joe Harjo, a printmaker by trade who explores issues of identity. Harjo’s issues with identity fall outside of the typically understood Mexican-American narrative that defines so much of San Antonio. Harjo is a Native American from Oklahoma and uses his work to explore the projected stereotypes of Native American people in general. He plays with humor to make these stereotypes transparent, capturing that awkward moment between laughter and understanding to explore the dissonance that still exists between race and ethnicity. Harjo also defines and creates moments of discomfort, thus allowing seconds where perspectives can shift and relationships can be redefined. Before we left his studio, Harjo gave Chris a 10-second hug.

Something happens when you extend a hug beyond the traditional three seconds. A certain intimacy between the players changes the connection, and this little, inexplicable moment can define the nature of the relationship between the hugging parties. Chris and Harjo will no doubt always talk about their 10-second hug, and I’m happy I was able to witness the magic.