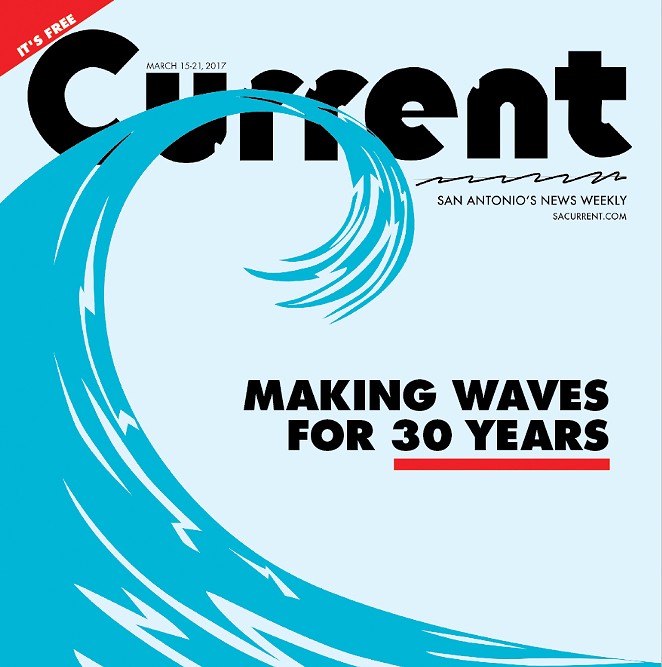 “The Current is an idea whose time has come. It is a newsweekly for those who love San Antonio, who care about her past and her future, who want an intelligent digest of the week in review, who want a good time in print – the San Antonio Current.”

That was the founding vision for this humble little alt-weekly, penned by founding Current editor Linda Matys O’Connell in the paper’s inaugural pressing on April 24, 1986. And in the three decades since, we’ve been slinging shit at the powerful, lining the birdcages of our detractors, and working weekly to unearth the fascinating, troubling, and inspiring stories that make San Antonio a city beyond easy description.

Not a socialite mag or a glossy, the Current was to be an irreverent, muckracking weekly staffed by gadflies, grumps and young, idealistic malcontents who wanted desperately to push this city forward. Probing and challenging the city’s identity in the '80s meant exploring things like the meaning and history of terms like Mestizo, Tejano, Texian and Gringo; today, we consider the evolving, multi-faceted nature of words like Chingona. For one May 1986 issue, conjunto scribe Juan Tejeda and electronic music pioneer George Cisneros (who back then called his work “folk electronics”) grace the cover, illustrating the dichotomy of this city’s deep musical roots.

Police brutality, border politics, development – all issues that echo into today and are woven into the 30-year history of this publication. Articles remembering Emma Tenayuca and the Pecan Shellers Strike date back to our first year. Grumbling over the Alamodome goes back about just as far. The colonial roots of the missions have always been contemplated in these pages, as have the sordid politics of the city, including the Cisneros affair that ended the local career of beloved Henry (a story the Current broke when SA’s two dailies, the now-shuttered Light and the Express-News, balked).

Like most publications of any age, the Current has had its ups and downs. In its early years, the skeleton crew toiled away in the basement of 110 Broadway, churning out stories or ideas that evaded or were overlooked by the Express-News and the Light. In the leaner years to come, the paper even shuttered momentarily, and then published only biweekly. In fat years, when the ad and classifieds revenue flowed freely, the staff cranked out ambitious projects week after week.

Through the dedication of this paper’s staff and the generosity of its many owners (we’re now on our fifth), the Current is among those lucky few that managed to survive publishing’s cutthroat digital revolution. Now, as we here at the Current round out our 30th year, please consider these past three decades of stories, musings and investigations promise that we’ll always strive to punch above our weight. – Michael Barajas

Politics, Border Patrol and Bucking Against the Police State Since '86

A Look Back at the Current's Early Years

The Evolution of Contemporary Art in San Antonio