The Decade of Downtown Is Over. Now the Hard Work Begins. 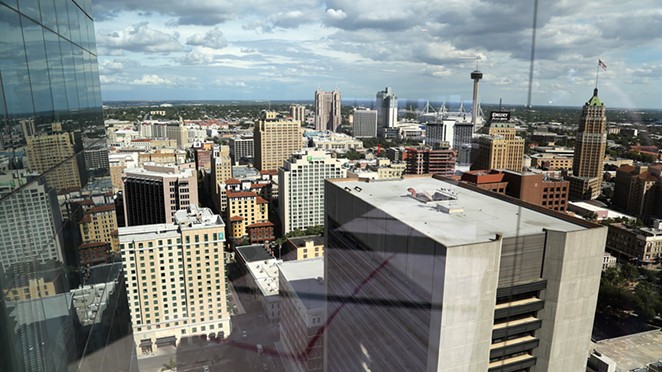 Editor’s note: This is a column of opinion.

As we enter the 2020s, I can’t help but think of two challenges facing the downtown area: how to prevent older adjacent neighborhoods from changing wildly, and how to build up the downtown core in a way that’s uniquely San Antonio.

The concern about the neighborhoods is one that has become almost universal, but it wasn’t always this way.

Ten years ago, when Mayor Julián Castro’s Decade of Downtown began, the concept of gentrification was still foreign to San Antonio. Everyone it seemed was rooting for more developments like the Vistana, which brought nearly 250 reasonably-priced apartments to west downtown when it opened the previous year in 2009. It was built by Ed Cross and his investors in a part of downtown that was barren, so we weren’t talking about displacement then. I can’t recall anyone who didn’t want San Antonio to reverse the slow death its downtown had been enduring in previous decades. We were having more conversations about rekindling downtown’s lost vibrancy, by building as much housing as possible in the downtown area, than we were about whether that housing should be affordable.

What was happening then was a gentrification of San Antonio’s culture, not its neighborhoods. I remember thinking how The Pearl’s tamal festival felt like the way Mexican festivals must feel in places like Austin or Portland. New restaurants and bars started to replace older versions, but minus the blue collar San Antonio vibe. R.I.P. places like El Tenampa and gatherings like Puro Slam, when it was held at On the Half Shell. I’d started a piece, one of a few I never finished when I was the downtown blogger at the San Antonio Express-News, titled “2012 Was the Year the Lameness Died.”

Back then downtown was hopping with tourists in the warmer months, and with locals during Fiesta and the holiday season. But on weeknights, in the gaps of inactivity, it was largely comatose. It’s still this way. There still aren’t enough people living in the core, because there aren’t enough places for them to live, to result in the level of vibrancy Castro envisioned. (Whether there’s a demand for this living is a weighty topic for another day.) Walk down Houston Street, my litmus test for whether we’ve reached that consistent buzz of activity, on a weeknight and it will feel as desolate as it did a decade ago. To be fair, there are much more things to do now than there were 10 years ago, and more residents living in the general downtown vicinity.

In my view, this past decade was about stabilizing downtown’s vitals, which is why I view the ’20s, not the 2010s, as the decade where you’ll see downtown fundamentally change.

The 2010s were about laying the groundwork. This took the form of roughly $265 million over three voter-approved bond programs that are being invested into downtown’s infrastructure. The construction of the Tobin Center for the Performing Arts, the opening of Yanaguana Garden at Hemisfair, the first stage of San Pedro Creek, and the cleaning up of Travis Park have played huge roles in this foundation building.

The building of apartment buildings on the outskirts of downtown—mainly in and around the Pearl, and in Southtown—created a donut-shaped development pattern. Only toward the end of the decade did we see housing start to take shape in the core. Just inside East César E. Chávez Boulevard is the just-completed, 338-unit Encore SoFlo by Dallas-based Encore Enterprises, and an unnamed and under-construction 343-unit apartment mid-rise by Austin-based Argyle Residential. On McCullough Avenue, Dallas-based Stillwater Capital is building roughly 260 apartments. And the 272-unit Baldwin in east downtown opened in mid-2018 by NRP Group, which sold it this year to Virtus Real Estate Capital of Austin. 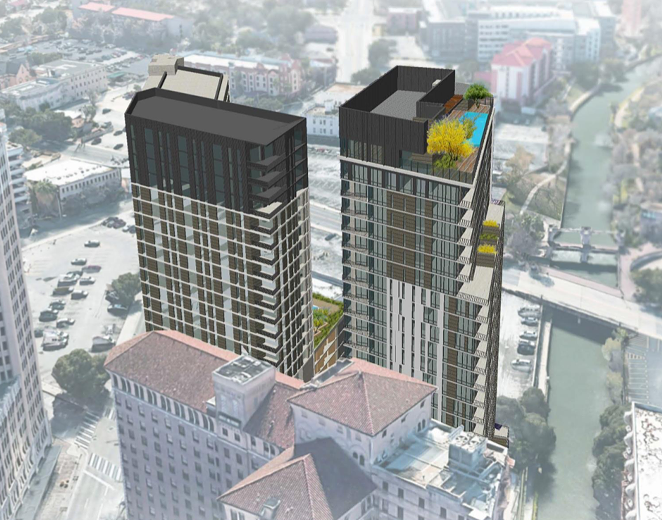 The projects that are in the pipeline paint a dramatically different picture of what San Antonio will look like 10 years from today.

Consider the twin, 24-story apartment towers JMJ Development of Dallas is planning for properties across from the Tower Life Building — one it’s building on its own, and the other with a full property tax exemption courtesy of the San Antonio Housing Authority (SAHA). The 24-story Frost Tower was a historic addition to our skyline because of its height and its modern architecture. Imagine the impact of two more high-rises of the same stature.

On the ground level, nothing will compare to the University of Texas at San Antonio’s (UTSA) massive expansion in west downtown and the symbiotic student housing and retail spots that are sure to follow—with developer Weston Urban, co-builder of the Frost Tower, leading the way. SAHA (which plans to raze the Alazan Courts for a new mixed-income community), VIA Metropolitan Transit (which wants to build housing in parts of the Scobey industrial complex) and nonprofit builder Alamo Community Group, among others, all have plans to get in on the transformation of west downtown.

Other notable developments include the 17-story Floodgate residential tower being planned for the River Walk, next to The Esquire Tavern. Early in the 2020s, expect San Pedro Creek Culture Park to run from behind the Fox Tech campus all the way to Nueva Street, next to a refurbished Alameda Theatre. Also, I’d assume Hemisfair and the Alamo Plaza project (for better or worse) will be completed in the next decade, as well.

These are the projects that are tee-ed up for downtown’s core. Of course, there are no guarantees in the development business.

As new buildings get built, I’d love for some of them to include tenants that represent the kind of culture that makes San Antonio unique. For example, downtown desperately needs a conjunto bar, or some live music place with indigenous music. Or, maybe, a dulceria? Mom-and-pop places. More tenants like the ones that inhabit the old Alpha Hotel complex, which includes an old-school-style barbershop, a locksmith and a bike shop.

But just because the growth is coming inward doesn’t mean our urban neighborhoods will cease to change.

Conversations of gentrification, or de-slumming, as famed urbanist Jane Jacobs put it, really started to peak in 2014. In May of that year, the City Council voted 6-4 to rezone a property along the Mission Reach, near Mission Concepción, which would pave the way for the uprooting of more than 100 low-income households from the Mission Trails mobile home park. The next month, Centro San Antonio hosted a luncheon on the topic, where tickets ranged from $60 to $90. The Esperanza Peace & Justice Center bought a ticket for Mary Flores and a few other residents of Mission Trails so they could attend the high-priced affair. This was around the same time when people were debating whether or not the change happening to Dignowity Hill on the East Side was rapid enough to qualified as gentrification. Months of debate went by until the Mission Trails residents were finally forced out in December and January of 2015.

Two years later, the city’s downtown housing incentives policy was revised: The footprint was scaled back, and developments that would cause direct displacement, like Mission Escondida, were no longer eligible. 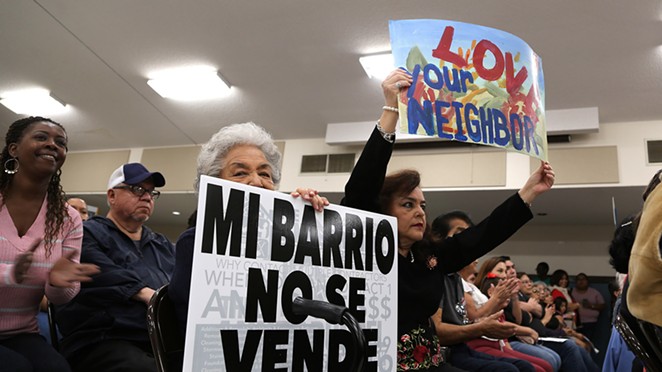 I remember interviewing then-Mayor Ivy Taylor, who pushed hard for private investment on the East Side, where she lived, while also acknowledging the need to find ways to keep the neighborhoods’ people and character intact. It wasn’t until Mayor Ron Nirenberg took office in 2017 when the discourse began to shift. In October of that year, Nirenberg formed his Mayor’s Housing Policy Task Force, and subsequently put the brakes on the downtown housing incentives policy until it could be revamped to include more affordable housing components — to the dismay of developers. As a city, San Antonio had begun to talk openly about its economic segregation; the City Council passed its first “equity” budget the same year. Whereas early apartment projects seemed moderately priced, the newer ones—every single one built with the help of property tax rebates, and other goodies inside the city’s incentive program—all seemed to be hitting the market with luxury rents.

“Those are case in points of a policy created with [the] great intention of revitalizing downtown, but that left out affordability so that only certain portions of our community can actually benefit from that revitalization,” Nirenberg told me when I was working for Folo Media. “That’s not what we want. We want downtown to be a place for all San Antonians, especially, when its (growth is) coming with public dollars.”

Since then, a flurry of new housing policy with the intention of curbing displacement, while incentivizing the creation of more affordable housing, has begun to take shape. But it’s too early to tell if the programs will help strike that balance between progress and preservation.

The downtown area seems primed to experience a development boom that will dwarf what we saw in the 2010s. The question is: Will it be managed with respect to our culture, or will it go unchecked and lead to more intended and unintended consequences? In particular, how will San Antonio’s West Side absorb the 100-foot wave of new development, lead by UTSA, headed its way? Will its flavor, San Antonio’s flavor, its people, its culture, be preserved or pushed farther west?

The 2010s were a piece of cake compared to the challenges that lie ahead.