The Density of Life 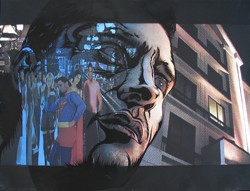 
Austin artist Brian Johnson made the trek to San Antonio for his exhibition The Density of Life, which features a collection of comic book-inspired pieces that delve into the inner thoughts of the characters featured in Johnson’s prints. His artist statement is unlike any other I’ve read before, wherein he reminiscences about his “idyllic upbringing that allowed `him` to view `his` future as full of possibility.” Thus, his days of being an avid comic-book reader led him to his somewhat futuristic prints, such as “The More Things Change,” which depicts a slightly overworked creature that resembles the Thing from the Fantastic Four. Johnson also dabbles in mixed-media: the show features, as described by Johnson, a woodcut depiction of a man taken from a frozen, disintegrated video signal, further abstracted into a a black-and-white relief. 10am-5pm, Mon-Thu, through April 18, University of the Incarnate Word, Semmes Gallery, 7301 Broadway, (210) 829-6000, uiw.edu.