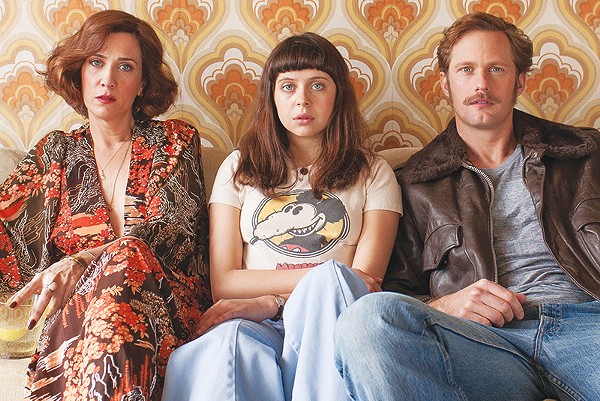 It's pretty disturbing that we live in a time where just the phrase "teenage girl" has taken on an indelibly pornographic tone. At a screening of the new film The Diary of a Teenage Girl, I was unsurprised but still squicked out to note that the rest of the audience was men who appeared to be in their fifties—that is, until the movie started and I realized that my knee-jerk reaction of protective disapproval was exactly the sort of thing that its main character would have hated.

Director Marielle Heller's adaptation of the graphic novel by legendary underground comix artist Phoebe Gloeckner is incredibly faithful to its title: The narrative never strays from the point of view of 15-year old Minnie Goetze, and the result is something that reflects all the anxiety, giddy joy, dread, and drama of first love. The twist, of course, is that the subject of Minnie's love is her mother's 35-year-old boyfriend, Monroe.

The film takes place in 1976 San Francisco, and its sun-bleached cityscapes and era-appropriate pop-culture references (Iggy Pop, H.R. Pufnstuf, The Rocky Horror Picture Show) underscore the now-unfamiliar permissiveness of the era, a time when books like Sol Gordon's You! The Teenage Survival Book treated young people as sexually autonomous humans rather than naifs to be protected from the world. Played by British actor Bel Powley, Minnie — who is notable in that she actually looks and talks like a 15-year-old and not like the miniature adults who populate most teen movies — is self-sufficient and creative, but palpably lonely. Her fantasies take the form of lushly animated, psychedelic blooms of flowers, feathers, and leaves; in her sketchbook, she draws anthropomorphic vulvas and gargantuan women stomping through the city. She's addled by hormones — confident and bubbly one minute and sulky and fatalistic the next. Her free-floating desire to be loved has her almost bursting through her skin.

Minnie's loneliness makes sense when we meet her mother, Charlotte (Kristin Wiig, magnetic as always), an emotionally unavailable, aging party girl who toggles between treating her daughter as a peer and seeing her as a usurper of sexual power. "I was quite a piece when I was your age," she winks during one mother-daughter chat, and it's she who inadvertently sets Minnie and Monroe's affair in motion when she encourages Minnie to take her place on a night out at a neighborhood bar. As with Andrea Arnold's 2009 indie Fish Tank, which also centers on a young woman entangled with her mother's boyfriend, there's some definite finger-pointing in mom's direction. In this case, it's underscored by Minnie's ex-stepfather (Christopher Meloni), who disapproves of his ex's freewheeling lifestyle and takes less than a minute to sniff out the vibe of Minnie's affair with Monroe.

It's no secret that teens of all sexes are walking powder kegs of sexual frustration, but Hollywood movies have always been loath to portray girls as having any agency, especially where orgasms are involved. Teen boys can fuck as many pies and visit as many brothels, locker rooms, and strip clubs as they need to with no consequences for their bad decisions. Girls, meanwhile, have generally had pregnancy, social ostracism, and even mental illness imposed on their characters as punishment for daring to have sex on their own terms. Films like 1999's Coming Soon and 2013's The To-Do List have gone some way toward mitigating this, but in both sex is treated as something that requires planning, research, and some degree of romantic remoteness—practice for later rather than fulfillment for now. The portrayal of Minnie's hunger for Monroe (True Blood's Alexander Skarsgaard, dreamy even with a skeezy moustache) is unique because for her sex is not a matter of accruing social capital, but of overwhelming desire. It's also unique in that the film is deliberately unclear about how we as an audience should feel about that desire's chief target. With female sexuality onscreen, especially young women's, we're often presented with a binary: Is it exploitative or empowering? Damaging or liberating? Depressing or joyful? The Diary of a Teenage Girl asks why it can't be all of these things and more.

The first Phoebe Gloeckner comic I ever saw, in an issue of the all-female anthology book Twisted Sisters, featured an image that was hard to forget: A girl, kneeling in a dark basement, looking up at a man whose grotesquely oversized erection strains toward her. The girl has tears running down her face, and she's asking the man if he loves her. It was creepy and incredibly disturbing and my first introduction to Gloeckner's powerful, heartbreakingly personal depictions of growing up female. Out of context, this panel was impossible to see as anything other than straight-up predation; in the movie, it takes on a much more complex shape. The handsome, shiftless Monroe isn't so much a predator as a horny opportunist who lets Minnie take the lead in their affair and occasionally, halfheartedly tells her they need to stop.

Teenage Girl is frank about the ways that burgeoning sexual power can be clumsy and ill-directed. In one scene, Minnie and her best friend Kimmie playact as prostitutes, giving tandem blow jobs for five dollars apiece to a couple of randos but reaching out mid-act to clutch each others' hands tightly and reassert their own bond. And it's clear why Monroe appeals to Minnie, especially when their trysts are contrasted with those between Minnie and a boy at her school: The rich, handsome boy ends up seeming less acceptable than Monroe because he's so put off by her sexual intensity. Likewise, Tabatha, a tough street girl to whom Minnie is electrically drawn, is a shady flirt who flatters Minnie's ego while drugging her and plotting to trade her body for drugs. Compared to these two, a man twice Minnie's age seems downright healthy, his attention feeding her artistic creativity and confidence.

The point, ultimately, is that Minnie has to make mistakes in order to do that thing enigmatically referred to as "coming of age." In a moment which seems meant to slyly point out how arbitrary such delineations are, after losing her virginity to Monroe, Minnie muses that she has become a woman. (After all, what if your first time having sex is coercive or assaultive or even just bad—are you still a woman even if you don't decide you are?) But the point at which Minnie seems to cross another crucial line into adulthood is when she realizes that Monroe isn't her whole world, and isn't meant to be. The film is sensitive in filling out Monroe's character too: In a simpler story, he'd be an irredeemable perv. In this one, he's an immature man who sees in Minnie a fellow soul yearning for escape.

Powley's open, lovely face and comfort in her body imbues Minnie with a buoyancy that, along with the film's fanciful animations (including a sort of guardian angel that takes the form of Aline Kominsky-Crumb), underscore that there's as much possibility as pathos awaiting her. And her portrayal of casual teenage self-obsession is often hilarious. Notably, Minnie's diary itself departs from the long-embraced image of a small locked book with gold-edged pages in which the subject is romance rather than sex. The backward-looking moralist Caitlin Flanagan is among those who have glorified the diary as the circumscribed realm of private and exclusively female thoughts, rhapsodizing in Girl Land of diary-keeping as something that happens on flowered bedspreads in suburban bedrooms. For Minnie, the diary is instead a boxy tape recorder-and-microphone combination, which captures her voice in all its earnest, matter-of-fact yearning: In one great scene, she rides a city bus, ruminating "Monroe is a great lay, in my limited experience" into the mic while other women around her pretend not to notice.

Judging from some of the reviews, it's still going to be a while before we're able to accept films that offer up female sexuality as something that can be as movingly unremarkable as Minnie's, almost as though the lack of external judgment offered by the story invalidates it. It's not surprising when a story that's presented exclusively from the perspective of a teenage girl is deemed "generic attitudinizing"—too many of us simply don't trust girls to be reliable narrators of their own experiences, much less of their riot of desires. I started this film wanting to protect Minnie from the gaze of unknown men, but I ended it remembering that teenage girls, as eroticized as this culture has made them, will always speak for themselves. We should all try listening.

Film & TV The Diary Of A Teenage Girl Video