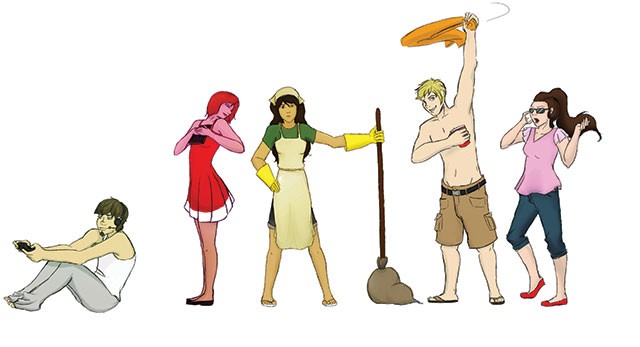 If you’re going to be in a college dorm, a spacious apartment, a cramped shared bedroom or anywhere on a college campus for that matter, be prepared for your space to be invaded and your comfort zone diminished. One of the scariest parts of college is potentially living with an awful roommate.

Maybe you’ll get lucky and end up with a roomie who’s never around, travels a lot, or lives with their significant other. Some will become your best friends and some will scar you for life. To ease the pain, we’ve created a list of the typical nasties you might encounter and how to deal with them.

P.S. If one of these descriptions sounds like you, don’t take offense, just take note and try to reduce your irritating habits.

At first glance you might think it’s awesome to have a roommate who likes to clean, but after a month of living with them you’ll soon learn it’s not so fresh. This roommate strives for sparkling countertops, dust-free pictures, and overly organized everything.

How to Deal: The best way to avoid butting heads with the OCD Cleaner is to keep your mess to yourself. Trash your room all you want, but don’t let it out of your bedroom if you’re in a suite or multi-bedroom situation. If you’re sharing a room, relegate your junk to your bunk only. Don’t try to help

clean more than you would normally, or offer to do it for the OCD Cleaner because no matter how hard you try, you will never scrub, sweep or dust enough to meet their standards.

If you’re expecting a greeting when you get home from class, you won’t get one with this roommate. The Quiet One seems perfectly normal until you realize you’ve never heard them utter one word. They’ll come and go as they please and never say anything. If you’re lucky you’ll get a smirk or an awkward wave out of them, but don’t expect much.

How to Deal: If you need to communicate with the Quiet One, you’re better off leaving a note. And hey, if the worst thing about them is their silence, consider yourself lucky and read on for other truly obnoxious cases.

How to Deal: You’ll want to say something, but you won’t want to break the Clinger’s heart. If they are the confrontational type, let them know you’re uncomfortable. But if your Clinger also throws Grade A hissy fits or pity parties, just try to keep your private life private. The less you share, the less they can intrude on your comings and goings.

We all see this guy or girl on campus surrounded by several frat brothers or sorority sisters. They never go to class, they need a crew just to study, they stay out late partying and they almost always bring a crowd of people home with them because, as a less shy version of the Clinger, they can never be alone.

How to Deal: Our go-to-method for dealing with roommates like this is simply talking to them about it without sounding like a buzz-kill. Try asking them not to bring friends over past a certain hour, or ask that they tone it down in the dorm at night because you’re quiet and respectful when they’re sleeping during the day.

The Passive-Aggressive roommate is often spotted by their random notes, (“Don’t leave dishes in the sink,”) or by their odd way of getting their point across. They will leave you a note to take out the trash, but if you don’t take it out, don’t be surprised if they sneakily put it all in your room. You’ve been warned.

How to Deal: Read the Passive-Aggressive’s silly little notes and try to consider them. If you can’t seem to hold a straight face when you find a new note, pull out a Post-it and give them some of their own medicine: “I ate your brownie. It was delicious!”

This roommate is never alone. The Romantic usually has their significant other or a current fling attached at the hip. They’ll constantly occupy your living space or shared bedroom to make out or to get it on.

How to Deal: First rule of thumb: knock first, if the bedroom door is closed for any reason. Second rule: Have a code, like putting a sock on the doorknob so you know when not to disturb the Romantic. If you still wander in on too many lip-locking (or worse) sessions for comfort, suggest they do date night somewhere other than your futon. They’ll get the hint.

College is some people’s first dose of freedom, and some will take advantage of it a little bit too much, like the Partier. The Partier can be found stumbling home in the middle of the night, vomiting everywhere, falling over everything, or all of the above.

How to Deal: Like the Socialite, the Partier needs a good talkin’ to. Ask that they tone it down, or that they try to be quieter when they come home after a night of raging, or propose that they stay with someone else on nights that they choose to get completely hammered.

Probably one of the hardest roommates to live with, the Slob lacks basic hygiene and cleaning habits. The Slob can commonly be found in need of a serious shower and surrounded by a pile of dirty clothes, food wrappers and unwashed dishes.

How to Deal: Again, try talking to them about it first. Bad hygiene and a slobby lifestyle are conscious choices some people make, so simply talking might not cause any change. On the flip-side to the OCD Cleaner tip, this time create boundaries for their mess, as long as it doesn’t create odors or attract creepy-crawlies that permeate your portion of the living space. If a major problem persists, talk to your RA about it, or start house hunting.

The Taker likes to take or “borrow” things from you, hence the name. While the items the Taker chooses to lay their hands on aren’t always the most precious of things, it’s still really freaking annoying.

How to Deal: Living with the Taker, a.k.a the Borrower, is like living with a pesky sibling. Try to talk and set boundaries on what things are OK to borrow and what things aren’t. Perhaps a simple text message asking to use something (“Hey, I need to dry my hair but can’t find my hairdryer, do you know where it is?”) might help the problem.

The Live-In, unlike most college students, prefers the solace of their own room—so much so they practically never leave. The Live-In often skips class and watches TV or plays some sort of video game with an obsessive devotion. Anything they might have to shower and get dressed for is out of the question.

How to Deal: The easiest way to handle a Live-In you share close quarters with is by emphasizing that you need your space to study, relax and have friends over, too. Talking and working out some sort of compromise of space is usually the best way to deal with the sweatpants-wearing Live-In. If you have separate bedrooms and rarely see this roomie, count your blessings, but do keep an eye out for signs of depression and other mental disorders that can cause anti-social behavior.

There are several types of roommates, both positive and negative. But remember you’re in college and everyone has to live with a roommate at some point. Hopefully these simple tips will help you get through your roommate experience. Good luck and start inquiring about the single room down the hall ... now!