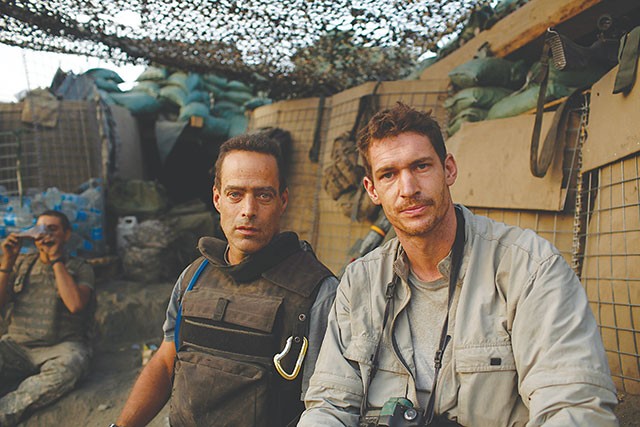 In this fascinating documentary, HBO examines the all-too-brief career of brilliant war photographer Tim Hetherington, a British journalist with movie-star looks who died covering the Libyan civil war in 2011. He packed a few lifetimes’ worth of experiences into his 40 years, plunging into the white-hot center of conflicts in Africa and the Middle East. Along the way he made close friends, earned the respect of his colleagues, and found the love of his life. He even picked up an Oscar nomination for Restrepo, his documentary about a U.S. platoon in Afghanistan.

So why would a guy who had everything to live for keep putting himself in places where he could easily die? That’s a tricky question, but the doc finds a satisfactory answer. Hetherington expresses his philosophy of life far more eloquently than I ever could, and the images from his camera will both unsettle and inspire you, as they probe deeply into the mysteries of human behavior.

But, OK, here goes: This man had a profound respect for people. On a basic level, he wanted to help troubled populations by chronicling their plight for an international audience. Hetherington didn’t just pack up and leave when an assignment ended, either. In a typical gesture, he stayed in Liberia after its civil war to serve as a teacher and mentor.

More than just covering conflicts, though, Hetherington wanted to connect with people, particularly people in extreme situations. War, he felt, provides the truest picture of ourselves. He came to believe that even with bullets flying and bombs exploding, humanity can flourish. His war photographs are notable for capturing not just horror, but hope. “You see that even in these terrible times, people are still human,” he said. “That, for me, is the redeeming factor in human experience.”

Director Sebastian Junger, Hetherington’s collaborator on Restrepo, doesn’t present his friend as a plaster saint. Hetherington struggled with destructive tendencies and, according to a witness, acted recklessly during the Libyan street fight that got him killed. But you can’t come away from the film with anything less than respect for a journalist willing to pay the ultimate price to tell us a little bit more about who we really are.

In video footage from the brutal Liberian war, a local woman asks of Hetherington, “What is this handsome young man doing in the lion’s den?”

Thanks to Which Way Is The Frontline From Here?, we now know the answer to that question.

Which Way Is The Frontline From Here?