The Flexible Favorite Continues to Evolve

Directions
Coat rim of Collins glass with coarse salt if desired, then fill with ice. Add tequila, orange liqueur and lime to ice-filled shaker. Shake. Strain into glass, top with beer and garnish with a wheel of lime.

Cocktail historian David Wondrich calls the Tequila Daisy the "pre-Margarita." His version (just one of many) of the drink — allegedly invented by an Irish bartender in Tijuana, no less — calls only for reposadotequila, lime juice and good grenadine. No orange liqueur. A little sparkling water tops it off. This leaves the door wide open for all kinds of variations on the tequila and citrus theme.

So we might as well step through as we celebrate Cinco de Mayo this week. Bohanan's (219 E. Houston St., 210-472-2600) bar manager Jordan Corney certainly did. Besting six others, his creation, The Rosa Picante, was just announced as Tequila Patron's Margarita of the Year. It follows what has come to be the standard format (tequila, lime juice, citrus liqueur) but makes several changes that apparently impressed the voters. In lieu of orange liqueur, Patron's Citrónge Lime; both ginger syrup and jalapeño oil up the spice quotient (and luxe up the texture) and rose water adds an exotic, floral note to the margarita that is repeated in the rose petal and salt rim. 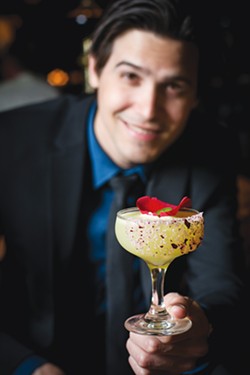 Corney says he "wanted to pay homage to everyone before us that made great cocktails." We don't contend here that he had the Nahuas or Aztecs in mind — distillation came to Mexico only after Cortez. But the ancients were surely high into fermentation. Chicha and tepache utilized native corn, for example, with pineapple only later becoming the base of choice for tepache. At Mezcalería Mixtli (5313 McCullough Ave., 210-320-1660), bar manager Edgar Najera has concocted a tall drink he calls Nahua Tepachico (pictured left), and it uses pineapple and maiz morado fermented together in a kind of homage to the past purple. Both tequila reposado and mezcal are the heavy hitters, sweetness is added by equally ancient piloncillo, and the icy drink is topped off with a splash of Topo Chico in the manner of the Tijuana Daisy. The drink is mellow and hauntingly fruity.

Keeping orange-less origins in mind, The Mexican Firing Squad (discovered in Mexico City by another cocktail writer and historian, Charles H. Baker, in the 1930s) is much like Wondrich's Daisy in that it includes tequila, lime juice and grenadine — the essential difference being a bold five dashes of Angostura bitters. Soda water or ginger beer is sometimes added as a topper. At Omni La Mansion's (112 College St., 210-518-1000) newly reimagined El Colegio bar, liberties are taken that push the drink back more in the direction of today's marg — the essential color is retained with strawberries, infused jalapeños give the tequila an explosive kick and agave syrup adds the sweetness that grenadine would otherwise have added.

Two kinds of bitters are essential to an Esquire Tavern (155 E. Commerce St., 210-222-2521) drink that has its roots in two classics — the Margarita/Daisy and the Old Fashioned. Called simply the Tequila Old Fashioned and served over a hefty ice cube, the drink consists of añejo tequila, Combier orange liqueur and both Angostura and xocolatl mole bitters. There's no lime, but there is a slab of orange peel, while grapefruit zest and a spoonful of mezcal are floated on top. The result is a drink that's both deep and bright, with the zest and smoky mezcal hitting the nose first. It's not on the menu, but "anyone can do it" says bartender Hillary Woodhouse.

Stephan Mendez, beverage director and head cocktitler (he comes up with the edgy, sometimes enigmatic names, in other words) for The Boulevardier Group bars, has recently added Saints Among Sinners to his list at The Last Word (229 E. Houston St., 210-314-1285). Considering that mezcal is the large umbrella under which tequila is a subset, his use of that ancient liquor is another way-back ploy. A dry Curaçao from Pierre Ferrand keeps the orange idea alive; lime maintains acidity; and simple syrup infused for 24 hours with Old Bay seasoning adds spicy/herbal complexity. This drink reads (and looks) disarmingly like a classic marg, right down to the "Aztec mole salt" on the rim, but it's, in fact, much more complex.

For all of the above drinks, you are encouraged to sample at their bars of origin. Should you also want to play a little at home, we've included couple of recipes to get you started.