The Granary: First looks at the Pearl's new gastropub 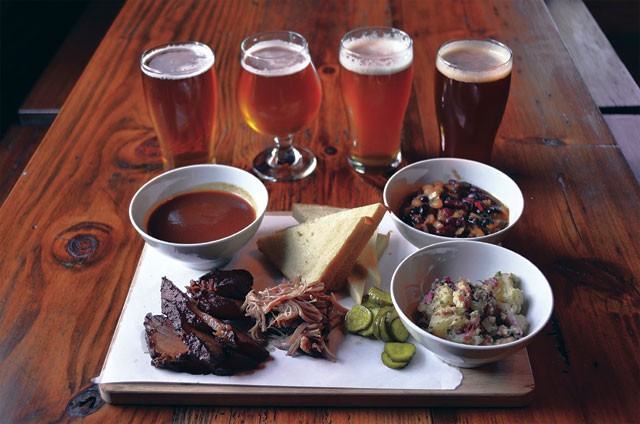 Only weeks old, The Granary 'Cue & Brew has successfully passed their shake-down period and is smokin' along with two menus. The new gastropub featuring barbecue and beer is housed in an old house on the south edge of the Pearl complex that was once home to Pearl Brewery's head cooper, and is the first project by owner/operators Tim and Alex Rattray. Tim Rattray, who trained under chefs Bruce Auden and Andrew Weissman (before staging in New York at Le Cirque and other top houses in NYC, Chicago, and Austin) runs the kitchen. His brother Alex, who began home brewing after visiting the Guinness plant in Dublin, is the brewmaster.

Lunchtime offers the traditional presentation of meats sold by the half-pound, barbecue plates, pork and beef sandwiches, and sides. At night The Granary goes eclectic and upscale, experimenting with renditions of global smoked meat traditions. Tempted by both the Moroccan lamb and the jerk chicken, I opted — on two occasions — for the "old school cue" plate to establish a baseline.

If you visited early on and found the brisket a trifle too-woody, come back. The Texas post oak feeding the smoker during their opening has been replaced by more apt "standard" (I presume white) oak. The result is a delicate smoke, allowing the ranch beef to show off its rich texture and flavor. On both occasions I found the brisket moist, and soft enough to cut with a fork. The pulled pork had a hint of Carolina-style tang, which was also found in the sauce, an all-region blend that also featured elements of St. Louis and Memphis styles. The sides were a German potato salad — nice, but no surprises here — and spicy beans, with a complexity abetted by not pork, but brisket burnt-ends. The house-made pickles, a quick-brine variety, remind of grandma's bread and butter. I couldn't pass trying the tongue opener. Cooked sous-vide for 24 hours, presented with a raisin and caper vinaigrette and slivered beets, it is soft as water and a far cry from the stuffings of a lengua taco.

Though the carnivorous fare is abundant, the Granary is also gaining attention as a dining spot conducive to hosting mixed-company, by which I mean it is vegetarian-friendly, too. Smoked tofu with curried pumpkin received raves from trusted friends. A Texas cheese board (try to find more than two types in local groceries) also intrigues. Ecstatic accounts of the soft-serve beer and pretzel ice cream with mustard caramel sauce, make one hope the kitchen continues to experiment.

The house beers brewed by Alex Rattray belie his lack of professional experience; on the contrary, they are remarkably mature in balance, offering proper mouth feel, complexity of taste, and eschew the juvenile excesses that endanger defining American micro-brewing. I tried the flight of four house brews. The blonde (not my favorite type), is a far cry from Shiner's adequate, but simple version. Though quite light, it has strong bready notes, and hints of floral tones. The IPA is a revelation, or rather, a throwback to roots that haven't been visited for quite a while. Gone is the heavy alcohol content and hop-you-to-death trend that has consumed what was once (and in Rattray's hands, is again) a brisk, but complex ale. The brown also fights fashion, with a bitter and sweet — rather than syrupy — impact, and a dry finish. The rye saison (as in season), modeled loosely on French farmhouse ale, offers full flavor and spice, and also trends towards dryness in the finish — complementing the kitchen's rich plates. This is one house where the food and drink truly are in agreement.