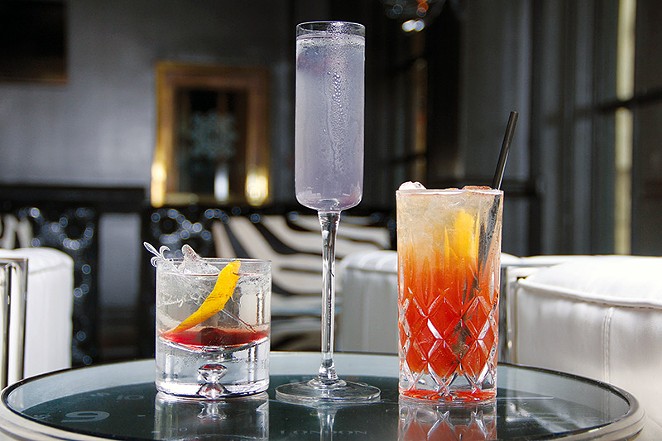 San Antonio's sizzling heat won't stop the rest of us from getting into the Halloween spirit. Just in time for All Hallow's Eve, I visited the newly opened Haunt, a small bar located in the historic, and reportedly haunted, St. Anthony Hotel.

Haunt's relatively new happy hour, coming on the heels of its recent opening, is every weekday from 4-7 p.m. My friend and I arrived at about 5:30 on a Wednesday for a hump day pick-me-up. Haunt is easily accessible off the street, but take advantage of the hotel's valet parking (for free! Just have a bartender verify your ticket before you leave) and walk in through the St. Anthony's lobby.

Honestly, a trip to Haunt is worth it just because of how stunning the St. Anthony Hotel is. One of the oldest hotels in San Antonio, the St. Anthony was once the most magnificent hotel in the River City. After years of slow decline, it was recently bought and revitalized by a new owner.

Transformations have been swift, and now calling the St. Anthony anything other than grand is an understatement. The short walk from the lobby to Haunt puts pristine white marble floors, floor-to-ceiling windows and massive dangling chandeliers on display.

This grandiose decor continued into Haunt, only with a more contemporary flair. The lounge looks like a slightly moodier Z Gallerie catalogue come to life. Funky zebra print chaises and white tufted leather couches were clustered around the majority of the bar to create intimate lounge areas, and hip abstract sculptures reminiscent of ice sculptures peppered the floor.

After sidling up to the bar, we noticed that we were the only patrons except for one woman at the other end of the bar. For most of the evening, Haunt remained almost entirely empty. This didn't stop us from having a good time, of course, and it was rather relaxing to have the bar to ourselves.

The bartenders were friendly and efficient throughout the evening. We never waited more than a couple minutes to get a drink, and when my friend requested a liquor substitution in her cocktail, other options were readily offered. The drinks themselves were visually pleasing and served in unique glasses, from tall champagne flutes to metallic martini glasses.

Haunt's drink menu is concise, with 15 wine options and seven specialty cocktails. Each cocktail has a whimsical name — I ordered "The Pixie," a gin-and-blackberry-liqueur drink, and later "The Lavender Lady," a charming cocktail combining prosecco with, you guessed it, lavender gin. Both drinks were sweet, but not too sweet, and were unique enough that I was interested until the last drop. This is definitely not a vodka-tonic kind of bar (although I'm sure they make a delicious one!), so don't be afraid to branch out and try something new.

Happy hour prices are on the more expensive side — $2 off all cocktails and wines, with regular pricing averaging around $10 apiece.

By the time we'd sampled almost half the menu (the Veuve de Vernay was also quite good) and left at around 8, Haunt was a little more lively. While the bar was far from packed, it was certainly busier than it had been during happy hour. I paid my tab, gave my prime bar seat to a stranger, and picked up my car from the (free!) valet. Only the next morning did I notice that I'd been charged full price for all of my drinks. By then it was too late to say anything. It just goes as a reminder to always check your receipts when paying.

Haunt is still relatively new, and there are a few kinks to work out before I would call it a truly phenomenal happy hour spot. However, its fun cocktails and modern decor make it a hip hotspot in downtown San Antonio, and that is more than enough to warrant a visit.

While I didn't spot any ghostly figures, I'm looking forward to another happy hour at Haunt for the spooky-chic ambiance ... and to try out another wine or two.