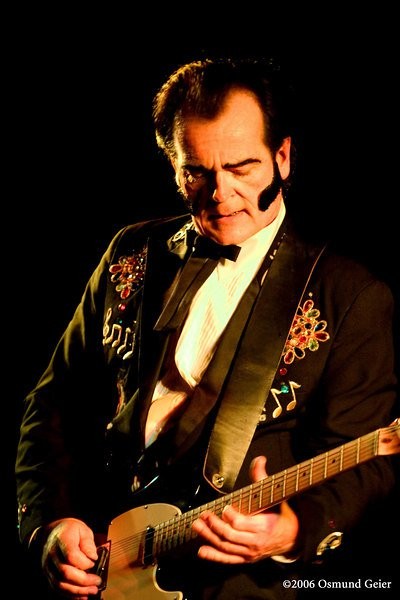 When it comes to Country Music there is nothing stranger than the spectacle that is Unknown Hinson.

Infamous in the country scene for his look alone, he sports a signature rodeo tailor coat and black ribbon necktie, glued on jet black sideburns, blacked-out front teeth, over exaggerated eye brows, and dark hair slicked back to reveal a prominent widow's peak. It's that signature image that has earned him the nickname "the Hillbilly Vampire."

Hinson is also the self-proclaimed "king of country-western troubadours," having written, recorded and produced six studio albums. Politically incorrect and hysterical, his music is based on and parodies the darker elements of country and redneck culture, with subject matter ranging from fighting a married woman's husband to being the reason his ex-lover turned gay. His music and live performances have won him several awards. His song "Torture Town" from his album Target Practice got him The 8th Annual Independent Music Awards for best country song.

But perhaps even than his music, Hinson is known by Adult Swim fans as the voice of Early Cuyler in the cartoon series Squidbillies, voicing the character for over 9 seasons now. The Cuyler character actually mimics Hinson in several ways, including a love for guns, liquor, and a "no-nonsense" alpha-male attitude.

Most people have a love-it-or-hate-it relationship with country music, a gengre too often disregarded as being about trucks, beer, blue jeans and girls in blue jeans. But Unknown Hinson's songs are so far off the wall while managing to keep the style of classical country at heart, a mixture that can somehow engage and entertain fans and non-fans of country alike.

See Hinson tonight, Friday July 15 at the Paper Tiger. The show starts at 8pm and tickets are $20.