The History of a Cowboy Breakfast, As Told By a Chuckwagon Cook

When thousands of people line up for biscuits, eggs, sausage and bacon at the annual Cowboy Breakfast, a celebratory and fundraising event for scholarships to St. Phillips College now in its 40th year, it means rodeo season is upon us.

Aside from being an opportunity to cheer on 7-year-olds clinching onto sheep’s coats as they ride the animal before getting knocked off, or to watch your favorite band, or check out new livestock — the 17-day event is a chance to chomp on rodeo food.

Turkey legs, fajitas, barbecue and over-the-top desserts are all on the menu, but this modern feast wasn't how vaqueros made their way through Texas. How did cowboys eat while herding cattle on trails from South Texas to the North?

For Ed Parsons, a world champion chuckwagon cook, answering that question and keeping cowboy food culture alive is what he strives to do.

Unlike the variety of foods prepared for cowboys today, the staples of the 1800s and early 1900s were beans and usually a type of bread, such as pan de campo cooked on a skillet. Beans, native to indigenous people of Mexico and Central America, were easy to transport much, like  flour, baking powder and salt. These along with a little bit of sugar, coffee and perhaps jerky were the staples of the chuckwagon pantry.

“They couldn’t carry fresh meat, but may have prepared deer or antelope that a cowboy killed,” Parsons said. For breakfast, hot coffee “so thick you can float a horseshoe on it.”

The food, just like the cowboy’s clothes, tools and corralling techniques, was influenced by the vaqueros of Texas.

“The cooks were Mexican ... we had a lot to learn from them,” Parsons said.

Baird, who at 78 years old continues to cook on a chuckwagon for charity events, said he picked up the recipes from the many cooks, including Latin chefs, he worked with over the years on ranches.

The Mexican influence can be found in dishes such as “Son of a Gun Stew” — a soup made of an animal heart, liver, and tripe, he said. This doesn’t sound far off from abuela’s menudo.

Designed by Charles Goodnight after the Civil War, chuckwagons were a military wagon with a trunk added to it that carried food, cooking supplies, a first aid kit and driven by the cook who rode along the cowboys on the cattle trail, according to the American Chuck Wagon Association website. (Oh, and thanks to Jerry Baird, lobbyist David Holt along with other chuckwagon aficionados from the American Chuck Wagon Association, the chuckwagon became the official vehicle of Texas in 2005.)

Besides feeding their fellow cowboys, cooks played many roles, including doctor, nurse and pharmacist. Parsons said a chuckwagon cook's reputation could help a cowboy determine which ranch to work for.

“San Antonio was a major hub where a cook could gather supplies to feed 10 to 15 cowboys for a drive of thousands of cattle that can last up to 30 days,” Parsons said.

To meet the demand for beef up north, before the use of railroads to transport cattle, after the Civil War cowboys rode paths such as the Chisolm Trail from Texas up to cattle houses in Kansas, said Sarah Gould, Institute of Texan Cultures, lead curatorial researcher.

You won't have to don chaps or a cowboy hat to try chuckwagon cooking during this year's rodeo. Have a minimum group size of 15 and you can select a meal such as “Buck's sourdough chicken fried steak,” a chicken and beef fajita dinner, a 12-ounce Angus ribeye steak dinner or  “Not Your Grandma's Pot Roast Dinner” all cooked using an open fire or in a dutch oven – the cowboy way. Prices range from $28 to $40 per person and include service and gratuity. 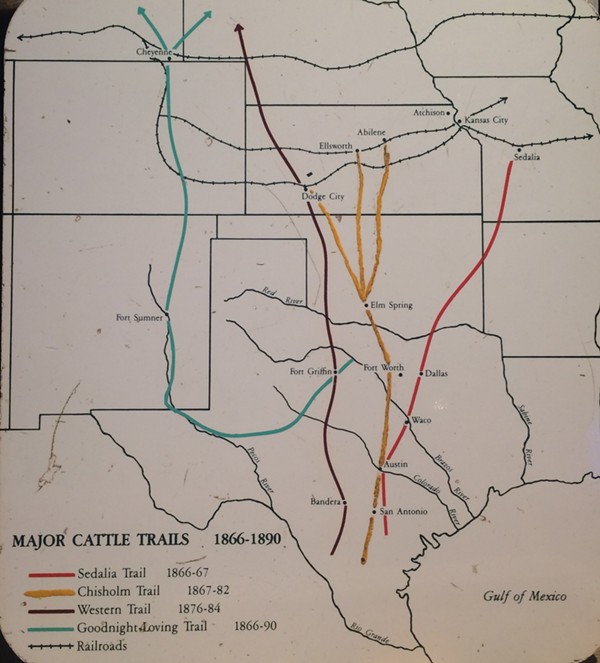 Similar to what a good meal does to fuel your rodeo experience, for a successful cattle drive, a ranch had to “have a good wagon and a good cook to keep people together, to keep people going,” Baird said.

And check out this video from the Briscoe Western Art Museum to hear Parsons talk more about his chuckwagon.