The Home Vidiot: 'The Book Of Negroes' Highlights April Videos 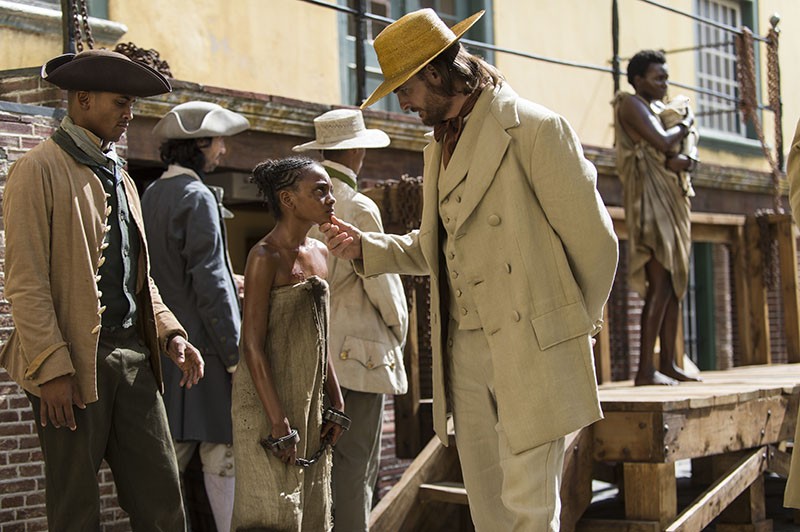 Those who hunger for the rich and strange among new videos will look for Jennifer Kent's Aussie horror film The Babadook, about a mom protecting her son from a monster, and Paul Thomas Anderson's Inherent Vice, based on Thomas Pyncheon's novel about a 1970 hippie gumshoe (Joaquin Phoenix) investigating complicated, parodic cases with an all-star cast.

Meanwhile, the explosion of offbeat TV series continues as the first seasons of various shows hit DVD. The acclaimed British serial The Missing flashes back and forth over 20 years as a man (James Nesbitt) searches for his kidnapped son and hires a French detective (Tcheky Karyo) to investigate. A crime is at the center of another well-received British serial, Fortitude, where a British cop (Stanley Tucci) investigates murder in an Arctic town. It's not only atmospheric but barometric.

WGN's Manhattan is basically a soap with a great hook: families in 1943 Los Alamos are involved in the top-secret Manhattan Project to develop the A-bomb. John Benjamin Hickey and Olivia Williams play the main scientist couple in this fictionalized story.

Signed, Sealed, Delivered is certainly a better title for this Hallmark Channel series than what they might have called it: Touched by a Postman. From the producer of Touched by an Angel, this wholesome drama follows four employees of the Dead Letter Office who track down the recipients of stray mail.

The Book Of Negroes

"I seem to have trouble dying. By all accounts, I should not have lived this long." These are the first words spoken by Aminata Diallo (Aunjanue Ellis) to members of British Parliament in 1807, as she recounts the story of her life from when she was kidnapped into slavery at age 11 from her African village and crossed the ocean to South Carolina in 1761. Her odyssey is the epic six-part miniseries The Book of Negroes, a Canadian-South African production based on Lawrence Hill's award-winning novel.

Hill's black father and white mother were Americans who moved to Canada, where their son found a book about Black Loyalists in the local library. These black residents of Colonial America, slave and free, joined the British cause during the Revolution because of Britain's promise of freedom and opportunity. The Loyalists moved to Nova Scotia, where their troubles were far from over. Britain catalogued the Loyalists in the Book of Negroes, an invaluable document that inspired Hill's novel.

In reimagining his novel for TV, Hill and writer-director Clement Virgo determined that it "should not be bitter medicine for viewers," as he says in the notes. Although his heroine suffers grueling ordeals, the gorgeous production values provide contrast as the story moves confidently through romance, melodrama, war, tragedy and history, all through the eyes of an indomitable woman whom we know survives and triumphs.

Typical of Jean-Luc Godard's recent films, Goodbye to Language is an essay-collage of scenes, quotations and tricks on intellectual themes. It stars a dog and a bickering naked couple. Godard is attracted to digital 3D for abstract effects, surreal colors and off-kilter compositions. He deconstructs technology and story, and twice the cameras drift into different streams instead of remaining parallax. The blu-ray pack also has a 2D version and excellent notes.

Musician Robert Lowe stars in A Spell to Ward Off the Darkness, made in three sections by avant-garde artists Ben Rivers and Ben Russell. The first part glimpses life in an Estonian commune with nude saunas and a geodesic dome. Then he's alone in a forest, reading and setting the cottage on fire. The last part, his black metal band's ultra-loud performance in Norway, is the opposite of the contemplative parts. The notes say, "We seek to produce experience itself — the cinema should not simply be leashed to representation, it should create reality."

Realities are created in Shawn Holmes' Memory Lane as a veteran with PTSD falls for a crazy woman who symbolizes his secrets and obsessions. When she dies from an apparent suicide, he thinks he can look for clues in the past by electrocuting himself with a system of bulbs over a tub. This no-budget wonder presents painful realities through its fragmented, distorted lens.

Classics hitting Blu-ray this month include Preston Sturges' Sullivan's Travels (1941), about a comedy director who yearns to make a serious movie (to be called Oh Brother, Where Are Thou?) and tours America as a hobo, getting more than he wished; Carol Reed's gorgeously shot suspenser Odd Man Out (1947), with James Mason hiding from police in Belfast; and Jean Renoir's The River (1951), about an English girl in India, shot in ravishing Technicolor. These are Criterion discs with bonus stuff.

You can't go wrong with Yasujiro Ozu's silent Japanese films of the early '30s. Silent Ozu: Three Crime Dramas show him brilliantly digesting the influence of Hollywood crime in Walk Cheerfully, That Night's Wife and Dragnet Girl. Going back farther, the 10-part French serial The House of Mystery (1923), made by Russian artists Ivan Mosjoukine and Alexandre Volkoff, is a beautifully shot, endlessly delayed melodrama of our hero's attempts to clear his name of murder under various disguises over 10 years. On this restored, tinted print from Flicker Alley, its arty look includes lovely locations and sequences in silhouette. There's a literal cliffhanger before love conquers all. It's the closest we have to time travel.