The Honest Trailer for 'Love Actually' Speaks the Truth 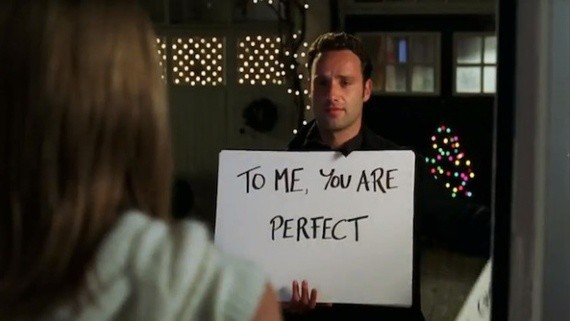 When Love Actually premiered 11 years ago, it became an instant holiday classic. The Richard Curtis-directed film seems almost scientifically engineered to tug at our heart strings with its collection of loosely interconnected romantic vignettes that occur during the holiday season in London. Curtis, as many know, is the man who wrote some of the 90's most popular romantic films such as Notting Hill and Bridget Jones's Diary, and he reached the rom-com apex with this 2003 holiday masterpiece. Why? Because Love Actually is the perfect feel-good holiday movie.

Now don't get me wrong. The film is required holiday viewing in my house, usually screened along with another perfect Christmas movie, Die Hard. But the film is so cliché, so schmaltzy and so nonsensical and, yes, demeaning to women, that any discussion of the movie should also be accompanied with a heavy dose of real talk. (There are also way too many turtlenecks going on in that film.) The movie was the target of an online media backlash last year on the film's 10th anniversary, and not just from those contrarians at Salon. This year, that backlash continues as Screen Junkies gives its trademark Honest Trailers treatment to the beloved romantic comedy.

If you're not familiar, Honest Trailers is a nitpicky, but hilarious YouTube series that has a special way of ruining your favorite movie. (The latest episode riffs of Guardians of the Galaxy.) Screen Junkies recently tried to deflate the fanatical adoration people have for this film by pointing just how dark and bleak it actually is. And if you really think about it, they point out, Love Actually is only considered a Christmas movie because filmmakers used the holidays as a flimsy narrative device.

But as flawed as the movie is—and it does have flaws—a Christmas without Love Actually is a Christmas I want no part of. This Wednesday, Alamo Drafthouse Westlakes is hosting a Girlie Night screening the movie, and you can bet I'll be in the theatre fan-girling over sad Colin Firth and sad Rick Grimes.

Here is the Love Actually Honest Trailer to burst your bubble before Wednesday's screening. If it ruins the movie for you, just remember: love actually is all around.