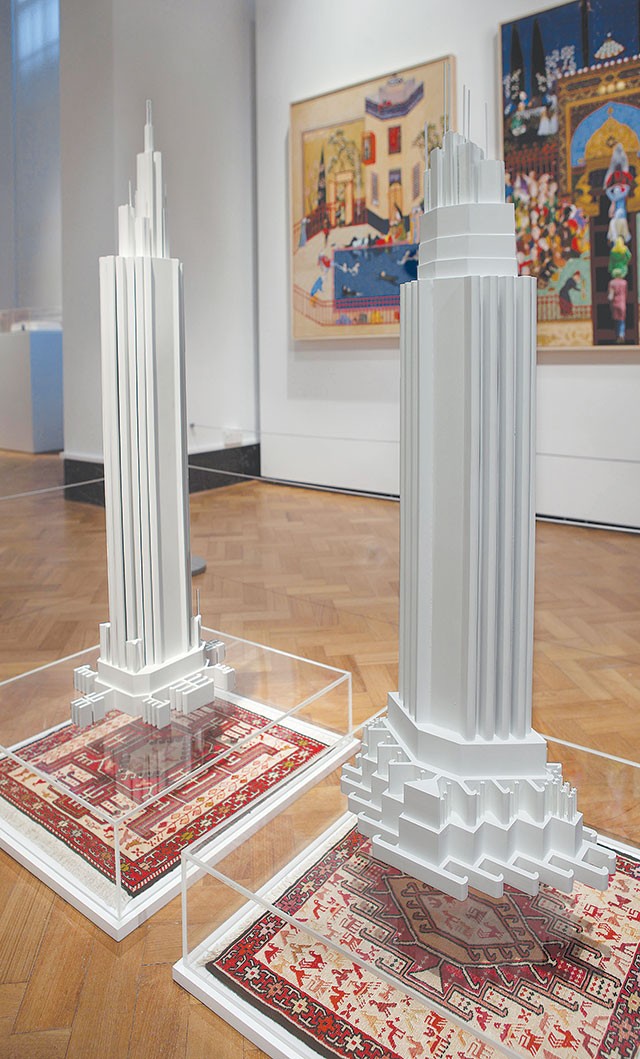 When you encounter the word “Islamic” in this hemisphere, art is not what springs to mind in an era inflamed by religious terrorism. But London’s Victoria and Albert Museum recognizes the potent interaction between traditional Islamic arts and contemporary trends with the Jameel Prize under the patronage of avant-garde architect Zaha Hadid. More than 200 of the world’s leading curators, designers and artists were invited to nominate artists for the 2011 competition and the 10 finalists are featured in “The Jameel Prize: Art Inspired by the Islamic Tradition” at the San Antonio Museum of Art.

Working with nomadic tent-makers, Algerian artist Rachid Koraïchi won the top £25,000 prize for his large-scale, embroidered cloth banners The Invisible Masters. Based on numerology and brimming with mystic symbols such as pyramids, feathers, waves, hearts, stars and the mysterious hand-and-eye, the seven black-and-white banners explore the lives and legacies of the 14 great mystics of Islam, including influential Sufi (devoted to the mystical dimension of Islam) thinkers and poets such as Rumi and Ibn Arabi.

Repetitive, concentrated handwork, related to the Sufi meditative practices, is involved in the work of several of these artists, even though they straddle the influences of East and West.

Iranian-born Hadieh Shafie, who has lived in the United States since 1983, writes phrases taken from mystical Sufi poetry and incantations on strips of colored paper, which she rolls into circles of varying sizes to create whirling, cosmic patterns in 22500 pages and 26000 pages. Aisha Khalid of Pakistan used 300,000 gold-plated steel pins to create her Kashmiri Shawl decorated with a paisley design, the droplet-shaped vegetable motif that migrated from India to Scotland in the 18th century.

The youngest artist, Noor Ali Chagani, who studied Mughal painting or “Persian miniatures” at art school in Lahore, Pakistan, employs thousands of umber-colored miniature terracotta bricks to make his fantastic sculptures. Lifeline resembles a textured shawl crumpled on the floor, a reflection on shelter and refuge. Peering through the peephole in Infinity, you see an endless line of crumbling brick walls, a vivid metaphor for the obstacles and challenges of life.

Babak Golkar, an Iranian-American, projects the designs of Persian carpets upwards into three dimensions as the footprints for fanciful skyscrapers in Negotiating the Space for Possible Coexistences No. 5.

Religious restrictions discourage figures in Islamic art, but two artists use them for social and political commentary. The perilous plight of Iraqi exiles is the focus of Baghdad-born artist Hayv Kahraman’s wood-panel paintings based on the Waraq (playing cards) distributed to U.S. troops to help with identifying archaeological treasures. Soody Sharifi, an Iranian who works in Houston, caricatures contemporary oppression of women by contrasting nude female swimmers in the 14th century with head-to-toe-covered 21st-century sunbathers in her digital collage Frolicking Women.