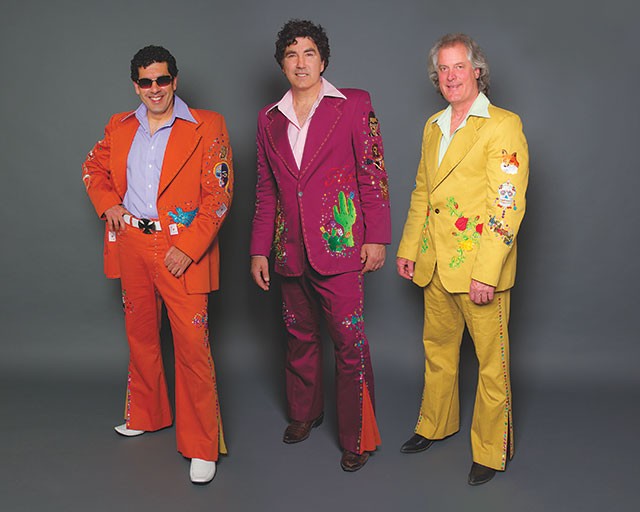 It was a surprise when the Krayolas returned from a two-decade hiatus in 2007 with an unrecorded Augie Meyers track, “Little Fox,” that become a minor hit. They found not only second life but greater productivity. Since then, they’ve released four full-lengths and three EPs, including their latest, free, eight-song Canicas (Marbles) EP.

“Who’d have known? The songs just came out,” says Héctor Saldaña (guitar/vocals), who started the band in 1975 with brother David (drums), Van Baines (guitar), and Barry Smith (bass). “We’re older, wiser, and my brother and I aren’t trying to kill each other … as much.”

The title reflects their Tex-Mex approach to British Invasion rock and power pop, which has in the past suggested a Southwestern Guided by Voices. Saldaña has a similar penchant for catchy, somewhat ramshackle arrangements.

“It’s kind of a happy, noisy sound, not totally proficient all the time, but melodic,” Saldaña said. “That’s what’s worked for us, and when we do that no one sounds like us.”

For the new EP they sought a starker sound initially inspired by their free Amazon single “Under One Roof,” featuring accordionist Flaco Jiménez, which Saldaña and Jiménez performed at last year’s Democratic National Convention.

“I took that idea of working very simply with Flaco and told the guys this is what I want to do — a really stripped-down Krayolas record,” he said.

The album ranges pretty widely from a bilingual cover of the Ramones’ “I Want To Be Your Boyfriend,” to a Mex-abilly cover of Flaco’s father, Santiago Jiménez Sr.’s song, “La Inundación De Piedras Negras” (The Flood of Piedras Negras), a haunting, understated acoustic guitar ballad (“Epitaph Street”) and acrime drama (“Tony Tormenta,” or “Tony Storm”) spiritual kin to “12 Heads in a Bag.”

“I told Flaco, ‘I want it to be spooky but not scary,’ so we put a mic on [the accordion] and put echo on that and it worked, and he dug it,” Saldaña said. “It doesn’t matter if it sells any records — it was worth it.”

Saldaña explained that they gave the EP away like they did last year’s Tex-Mex 21st Century EP, to increase their profile and maybe sell their older albums. Giving them away has helped put both EPs atop Amazon’s Latin and International Digital Albums charts. “It’s really offered a chance for people to find us,” he said.

Saldaña has embraced the Krayolas’ musical resurrection, and now that he’s older, he’s let go of the things that tormented him about the music business.

“It really is about the music and when you realize that, a lot of the angst goes away, the stupid stuff we worry about – ‘will someone like it? Will it get radio play?’” he said. “It almost doesn’t matter, if you’re truly in that moment. With this record we really tried to do that. We wanted the record to have a sense of place, a sense of fun and a sense of us, and I think we came pretty close.”