The Last Bandoleros Will Open for Sting on US, European Tours 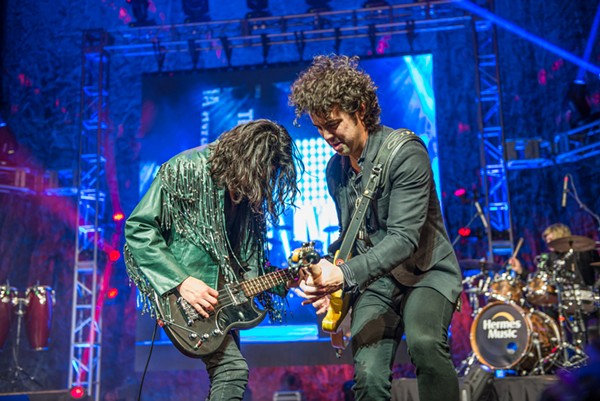 It's official: The Last Bandoleros will open for Sting in his upcoming US and European tour and "possibly" join him onstage for a couple of tracks. The tour starts February in Vancouver and wraps in mid-April with shows in Paris and Olympia.

"This whole Sting thing is so surreal, man..." Diego Navaira told the Current on Saturday, a few hours prior to their Tejano Music Awards set at the Tobin Center. "We're lifelong fans, but he allows you to feel comfortable in his presence."

The rocking, rootsy Tex-Mex band (Diego and brother Emilio IV on bass and drums, respectively, Jerry Fuentes and Derek James on guitar), which released its eponymous EP with Warner Music Nashville in September and plan the full-length release in late January, was given the seal of approval by the former Police frontman after Fuentes (a San Antonian who resides in Brooklyn) did two successful recording sessions with him two years ago. When Martin Kierszenbaum, who manages both Sting and the Bandoleros, was getting ready to produce Sting's 57th & 9th (released on November 12), he decided to get some new, young blood and called the Bandoleros to sing backing vocals on the album's first single.

The collaborations continued in February in Toronto, for the NBA All-Star game, with Fuentes and Diego representing the Bandoleros.


Earlier this year, the full Bandoleros (including touring accordionist Percy Cardona) joined Sting on Jimmy Kimmel Live! for a "bandified" (Diego's words) version of "Next To You," the opening track in Outlandos d'Amour, the Police's debut album. In fact, a live Sting/Bandoleros version of the song, recorded in New York when Sting was a guest guitarist in a Bandoleros show, is included in the deluxe version of Sting's new album. (During soundcheck at the Tejano Music Awards, the band played the opening bars of "When the World is Running Down, You Make the Best of What's Still Around," from Zenyatta Mondatta, the Police's third album.)

While we wait for the tour, here's the original version of "Next to You" followed by the version Sting and the Bandoleros performed on Jimmy Kimmel Live! I love both, but, if you ask me, the second version is the whole gordita.