The Last Days of Tony Kings: An American Story 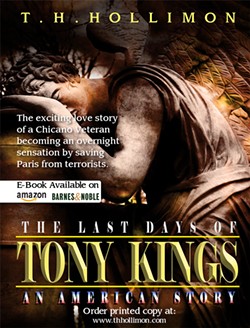 The Last Days of Tony Kings: An American Story is first and foremost a love story.

Readers who are seeking a tale of passion, action, adventure, and culture will be sure to find it within the pages of this book.

Our main character is former Vietnam Veteran, Antonio Reyes, a Chicano man from 'The Barrio' growing up in the racially turbulent 1960's. While calling San Antonio (San Anto) home, Tony battles his whole life in proving he is American by birthright. But as he is soon to find out, Tony’s story has only just begun.

The story ultimately takes the reader to the streets of Paris France, some 25 years after the war in Vietnam. Tony, suffering from PTSD, hallucinations, flashbacks, major depression, and survivor’s guilt comes face to face with his destiny: The Two Jackals.

These International terrorists create an elaborate scheme to attack the Eiffel Tower on New Year’s Eve, just as Tony and his wife are celebrating their 22nd wedding anniversary. On that night, Tony notices an opportunity and seizes his chance at redemption.

The decisions that Tony makes and the repercussions of his actions are sure to change Tony’s life forever. To find out Tony’s destiny, be sure to pick up this exciting tale of war, love, God, and country, The Last Days of Tony Kings: An American Story.