The legend of La Llorona 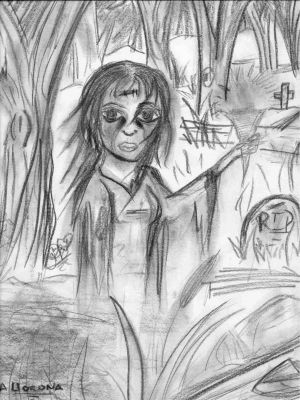 The night is still and quiet, with nary a cricket to be heard. Suddenly, a mournful cry breaks the silence and echoes through the haunted hollows down near the river. Parents warn their children to stay inside and lock their doors and to never venture out alone into the darkness or else the apparition will drown them. It is a legend that spans throughout South Central Texas and into Mexico

that of the wailing female spirit known as La Llorona.

According to folklore and many old timers who tell the tale, there was once a beautiful young and impoverished maiden known as Maria who became smitten by a dashing and successful man who was passing through her village. Following a torrid love affair, the woman bore him multiple children, whom the man rejected. In a desperate attempt to get him back, Maria led her unsuspecting offspring down to the water’s edge one night and drowned them all. Grief-stricken by what she had done, she eventually drowned herself too. But she was barred from entering the afterlife without the souls of her young victims. Thus, her spirit haunts the creeks and rivers, crying out to them in despair. So common is the myth, that there is even a place named Woman Hollering Creek on the city’s far east side toward Seguin.

Truth be told, there are different variations of the story, though the crux is the same. It is conceivable that the concept dates back to Greek mythology and tales of the Sirens who lured sailors to their watery deaths. Like many urban legends, the tale of La Llorona seems to be singular in purpose, to keep children safe by deterring them from going to close to the water’s edge. Still, the story of La Llorona is one that is familiar to most residents of the area. Occasionally it even results in sightings of a ghostly, female figure down by the San Antonio River. — Ken Gerhard

What is your favorite San Antonio legend?