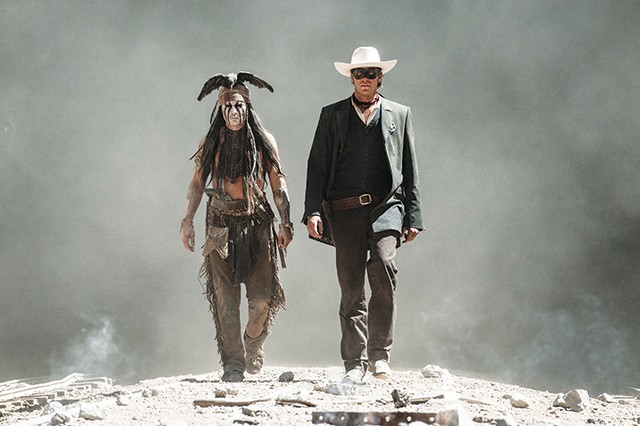 The cinema snobs scoffed, the industry folks couldn’t raise their eyebrows any higher, and the politically correct sharpened their spears. As for me, I couldn’t be more excited about The Lone Ranger, out this Wednesday. What can I say, I love a good, old-fashioned Western, and this one delivers.

Some may view the semi-reunion of the Pirates of the Caribbean crew as tiresome — the movie reconnected director Gore Verbinski, producer Jerry Bruckheimer, writers Ted Elliott and Terry Rossio, and co-star Johnny Depp — but the powerhouse brings the same madcap elation to a once-spent genre that made the original Pirates such an unexpected, entertaining blockbuster. In some ways, The Lone Ranger benefited from its infamous near-shutdown over budget concerns. A scaled-back production meant losing bizarro special effects like supernatural coyotes, and the installation of Revolutionary Road screenwriter Justin Haythe helped to further ground the script. I could never truly take seriously concerns that this film would continue to toe the television show’s assumed racist line (see “In Defense of The Lone Ranger”), because thankfully, these days even a whiff of racism is not only bad for reviews, it’s bad for business, too (not to mention society). Just ask Paula Deen.

Right off the bat The Lone Ranger addresses the complex issues surrounding the historical treatment of Native Americans in pop culture, by playfully having Depp’s Tonto pose in the “Noble Savage” area of a Wild West sideshow, years past his crime-fighting prime. Tonto narrates the film, albeit from an increasingly unreliable perspective. As expected, Depp provides most of the film’s belly laughs as an unflappable, deeply weird Comanche with an equally immutable (because it’s dead) crow on his head.

Another blessing in disguise for the film is that in its long march from conception (2007) to release, it missed the sweeping trend of portraying action heroes as navel-gazing sadfaces. This Lone Ranger (played by Armie Hammer, read our interview with him here) has a reason to despise the cannibalistic and greedy villains, sure, but he’s free of boiling rage, existential terror, and the like, replacing it with an easy-going charm. Many of the film’s best jokes come at the Lone Ranger’s expense. That doesn’t mean he’s a total idiot, however.

As John Reid, Hammer is at first a stuffed shirt, waving around John Locke’s Two Treatises of Government (which, maybe I’m reading too much into it, set forth arguments against slavery and most “rights of conquerors”) as he heads back to his hometown to serve as district attorney on some sandy Texas plain. He loves the law, maybe a little too much, and refuses to use a gun for most of the film.

Tonto, however, doesn’t share this blind allegiance to the white man’s easily corruptible code, a source of frustration for both when they team up to track down a true baddie, Butch Cavendish (played by an unrecognizable, grimy William Fichtner), who grievously offends both the masked man and his faithful sidekick. Cavendish is not only a criminal by Reid’s terms, he’s also symbolic of an evil so foul it can throw the entire natural order out of whack, according to Tonto. We see this not only in random, carnivorous bunnies, but also in a brewing war between white settlers and Comanche Indians, despite previously respected treaties. Trying to avenge his family without resorting to vengeance, Reid finds himself an outlaw for sticking to his beliefs while his beloved legal system suffers more abuse than Tonto’s dead crow, and the Lone Ranger is born. While his superhero counterparts may concern themselves with saving the world, LR just wants to serve justice in a land where the law is increasingly bent for a powerful few — a Lockean nightmare, and perhaps a more terrifying situation than could be concocted by Zod, Kahn, or any other maniacal villain du jour.

Let’s leave the plot at that, because there are some pretty decent twists for the uninitiated, and for those already familiar with previous Lone Rangers, the film hews closely to its origin story.

What makes The Lone Ranger such a damned good time is Verbinski’s rollicking, realistic action sequences. He reportedly built miles of actual train track on location in New Mexico to enact the multiple runaway train scenarios, which somehow never get old. The four quarter horses that play LR’s iconic Silver should all be given top billing and a shot at Best Supporting Actor for their agility and adorable scene chomping. And yes, the grand finale involving the horse, two heroes, two villains, two speeding trains, one damsel in distress, a baffled kid, and a whole lot of dynamite goes down to the William Tell Overture, the theme music of the radio and television series. Whether you enjoy that scene is at least as credible proof of American citizenship as a photo I.D.

Yet amid all the fun (149 minutes of it, to be exact) there’s a slight subversiveness to the plot, which takes a clear-eyed look at the raw deal offered Native Americans, and the lies white people told to placate themselves. The film’s true ending, after a hearty guffaw promising a sequel, shows old Tonto shuffling off, alone, in an ill-fitting Western suit, into the vast expanse of nothing which he used to call his home.