'The Man From U.N.C.L.E.' Looks For Room In Crowded Espionage Marketplace 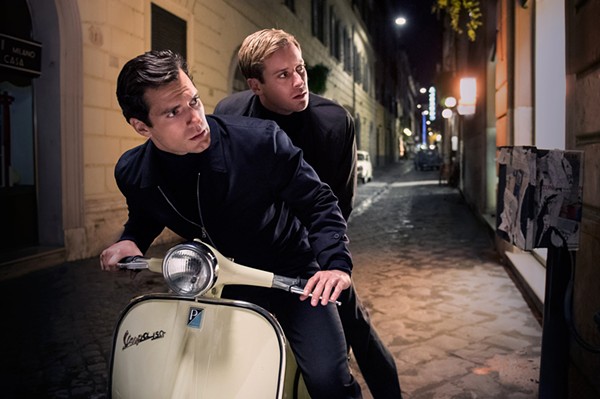 It's understandable if this is your first reaction to a movie version of The Man from U.N.C.L.E.: "Do we really need another movie version of an old television show?" It's a reaction one should have on a regular basis and it only means that you are an emotionally healthy adult. But there's another equally valid first reaction: "Do we really need another spy movie?"

It's true, of course, that the same sentiment could apply to many genres and sub-genres: comic-book movies, Nicholas Sparks adaptations, childhood toys as cinema ... you get the picture. But finding a distinctive tone can go a long way toward shaking that sense of overkill. With a James Bond movie still on the way this year, we've already had the broad comedy of Spy and the slick action of Mission: Impossible – Rogue Nation. What could Guy Ritchie (Sherlock Holmes) bring to The Man from U.N.C.L.E. that would make it seem anything but superfluous?

The answer, fortunately, is a frisky refusal to take anything all that seriously — most of the time, anyway. Ritchie also wisely opts to stick with the series' Cold War-era setting, opening the story in 1963 as CIA agent Napoleon Solo (Henry Cavill) attempts to extract Gaby Teller (Alicia Vikander) from East Berlin, with KGB operative Ilya Kuryakin (Armie Hammer) in pursuit trying to stop him. Gaby's father (Christian Berkel) is a nuclear scientist who has disappeared and she may be the key to finding him before neo-Nazis manage to obtain their own nuclear weapon. When it becomes clear to both the American and Soviet governments that this is more of a threat than they are to one another, they team up the already-antagonistic Solo and Ilya to recover the dangerous technology.

Thus commences plenty of bro-ish sparring between the two agents and the two leads get at least a reasonable amount of mileage out of their "Solo calls Ilya '(Red) Peril'/Ilya calls Solo 'Cowboy'" dynamic. Cavill bites down hard on an affectless American accent that seems to have been learned from TV anchormen; Hammer has about the same luck with his Boris Badenov-ian Russian. Yet they're still both entertaining as Solo's cat-burglar cool collides with Ilya's barely-bottled rage and they metaphorically swing their junk at one another in the form of which country offers the superior espionage technology (or even who has the better fashion sense).

The real energy, though, comes from Ritchie's willingness to get playful with the way he frames some of his scenes. He uses depth of field to place goofy moments in the background out of his characters' eyeline, or split-screen to pick up the pace during a pair of set pieces. He drops out the sound when Ilya and Solo are bugging a conversation in a car between Gaby and her slightly sinister uncle (Sylvester Groth). And in one of the most effective sequences, he places Solo in a truck — listening to Italian pop music and munching on a sandwich while Ilya tries to evade bad guys in a high-speed motorboat chase — to give him time to ponder whether he's willing to risk himself to help his new partner.

There's no weight to any of this stuff, but it has enough fizz that The Man from U.N.C.L.E. doesn't feel derivative — at least until Ritchie tries to stage conventional action. His two Sherlock Holmes films were already evidence of how terrible he is at it, and U.N.C.L.E. offers up an extended, humorless bit near the conclusion where Solo is chasing bad guys in an all-terrain vehicle, Ilya is following on a motorcycle and the editing renders the whole thing nearly interminable. It's the kind of headache-inducing excuse for contemporary "action" that can make a movie feel like just the latest blur of bodies and vehicles in motion.

Perhaps it says something that even Ritchie realizes the aforementioned sequence doesn't deserve to be the climax, even as it stops the movie dead in its tracks to resolve the fate of one of the key villains. Indeed, I'm not sure I've ever seen a spy movie in which the hero ultimately saves the day in quite the way that it happens here. And maybe that's a decent result for another TV show adaptation and another spy movie: that it leaves us with a grin, rather than the feeling that we've been here a hundred times before.