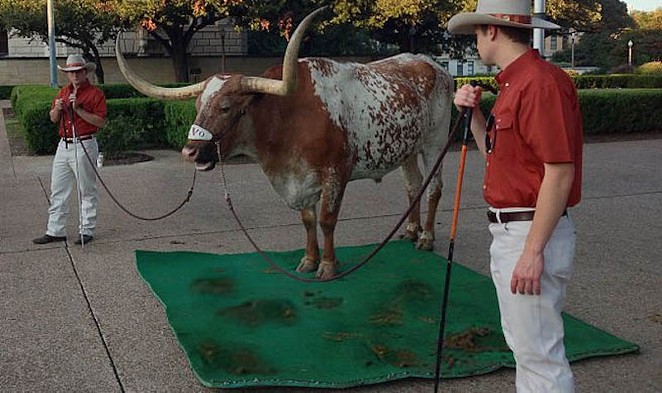 University of Texas mascot Bevo XV has begun his own form of protest against the playing of “The Eyes of Texas” at university events where he's appearing.

The 1,800-pound longhorn steer is now engaging in projectile defecation  whenever the song is played. His diet and exercise regimen haven’t changed, according to a university review. The only variable has been the recent uproar over the song, which has come under fire from critics who say it has racist origins.

Arlo Sprayberry, the self-proclaimed Bevo “whisperer” of the Silver Spurs, the group that cares for animal, said the steer began displaying displeasure with the song last year after the Oklahoma game.

“Originally, we just thought it was because Oklahoma beat our ass again,” Sprayberry said. “But then we noticed Sam [Ehlinger] was the only player singing ‘The Eyes’ with the band 'cause everyone else was protesting. After that, Bevo just cut loose with a giant, watery shit. Damn near ruined a good pair of Lucchese boots.”

Sprayberry said he aggregated the situation when he read aloud the emails from alumni threatening to pull funding from the school if the athletes didn’t stand and sing the song. Some messages even alluded to carving the steer into steaks if he didn’t literally get his shit together.

“Generally speaking, we have seen rare cases where triggering events cause certain behavior in horned mascots,” Fincannon said. “Ralphie the Buffalo at the University of Colorado would go into estrus whenever she heard ‘Rocky Mountain High.’ Tusk, the razorback at the University of Arkansas, is so gentle he gives kisses. But any song by the Ozark Mountain Daredevils sends him into fits of rage.”

UT Athletic Director Chris Del Conte said Bevo needs to be on the sidelines just as student athletes must gather by the band to sing the school song. It’s about upholding tradition and showing unity, he added.

“I really don’t care if we need a parachute-sized diaper for that steer, he needs to be there showing support,” Del Conte said. “Though it isn’t surprising to see him jump on this ‘Eyes’ protest. He is a herd animal with no balls.”