The One Thing Every Musician Needs To Hear 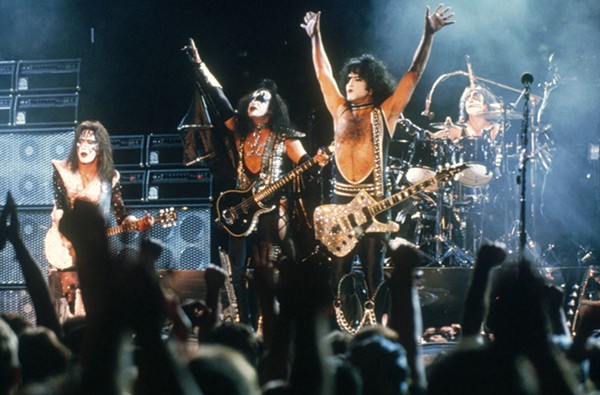 Performing at great volume, musicians' ears are bound to a cruel ratio. As ability and audiences grow, earplug-less musicians are able to hear less and less of their work — like a painter whose vision muddles with each brushstroke.

For musicians, soldiers and others exposed to loud sound in the workplace, the damage is known as noise-induced hearing loss.

"What happens in most cases of noise-induced hearing loss, there are cells inside the ear that effectively die off in response to sound," Matthew Fitzgerald, an audiology expert at Stanford University, told the San Antonio Current.

The issue hits real close to home for Fitzgerald, who said he suffers from a "mild case of tinnitus from a Dinosaur Jr. show back in the day."

Inside the ear, there are outer hair cells — responsible for quiet sounds — and inner ear cells, which transmit information to the auditory nerve connecting to the brain.

"So when you get a lot of noise exposure, in effect, [the cells] can start to die off," said Fitzgerald. "In some cases, they'll swell up and they'll explode." Damage can also occur at the neural level, where overexposure can fry the "synapses that connect your auditory nerves to the inner ear cells."

For musicians, the decision to not wear earplugs comes down to a combo of necessity and aesthetics. Unburdened by harmony, a drummer might be able to wear earplugs at all times. But Bianca Quiñones, at the front of SA punk quintet Amygdala, needs to hear at full capacity.

"For me, as a vocalist, it's hard to practice and play with earplugs," said Quiñones. "The other guys in the band are able to do that but I can't 'cause I'm closing my ears and I can't hear my voice and it just doesn't sound right to me."

Yet she's aware her decision came with consequences.

"It was when I started playing with them that I developed tinnitus pretty bad," she added. "If you're in a quiet room, you just hear constant noise. It could drive someone crazy if they don't get used to it."

"I like the band so loud that it's almost shaking your clothes," said Woodard. "That feels good to me. Cutting out frequencies with earplugs has always been a bummer. Standing in front of that wall of speakers, I want to ingest all that."

Over time, that ingestion takes its toll.

"After gigs, it's the worst," noted Woodard. "I'll hear multiple high frequencies ringing at the same time. Sometimes it's hard to sleep after a gig. Whenever it's quiet, I'll hear at least one tone. All high frequencies, no low frequencies."

Sound pressure is measured on the logarithmic decibel scale — so, an increase from 70dB to 80dB would sound about twice as loud. A conversational tone clocks in around 60dB and a whisper around 20dB. At the higher end, a shotgun blast clocks in at 160dB. Amplified by water, a blue whale call is a staggering 188dB.

The loudest sound that can be achieved on Earth's atmosphere is 194dB — above that, sound (presumably from a bomb, meteor or volcano) just registers as a shock wave.

In the rock 'n' roll arena, KISS and shoegaze lords My Bloody Valentine are considered the loudest bands of all time, with their concerts registering in the 130Db range. 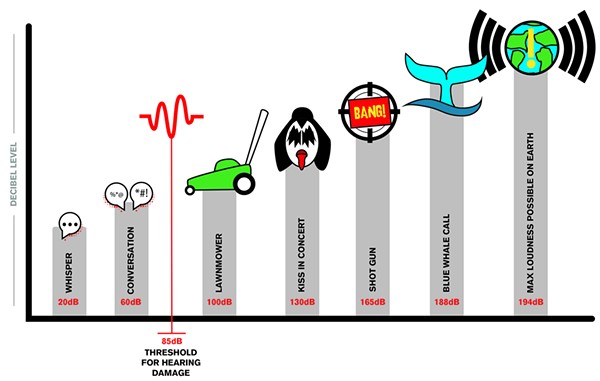 "As somebody who saw My Bloody Valentine, I believe it," said Fitzgerald.

The federal Occupational Safety and Health Administration allots a time amount one can be exposed to certain decibel levels before suffering damage. At 85 decibels, an ear can handle 16 hours before the threat of hearing loss. At 110 decibels, it's only 30 minutes. At a 130dB KISS concert, you've only got a minute and 53 seconds before permanent damage sets in — about half the length of "I Wanna Rock N Roll All Night."

Hearing damage begins as short-term loss and problems with pinpointing a conversation in a loud room. Over time, it can lead to more serious problems. According to a study published in March 2014, hearing loss is associated with higher rates of depression. Among elderly individuals, it has been associated with an increased risk of dementia.

Tinnitus is a particularly cruel symptom. After overexposure to loud sounds, you begin to hear a high whine in quiet settings — a ghost pain of sorts.

"The rate of depression with tinnitus is extremely high," said Fitzgerald. "There have been cases in the past where people have had their auditory nerves severed. So they're willing to go completely deaf in that ear in the hope that it will eliminate tinnitus."

For musicians and concert goers, the answer is simple: earplugs. The little foam solutions cut sound levels 15-30dB, depending on the quality and fit of the plug. But, like cigarette smoking or biking without a helmet, hearing damage is another convinience problem with a simple answer — ignored until you can't hear the question anymore.