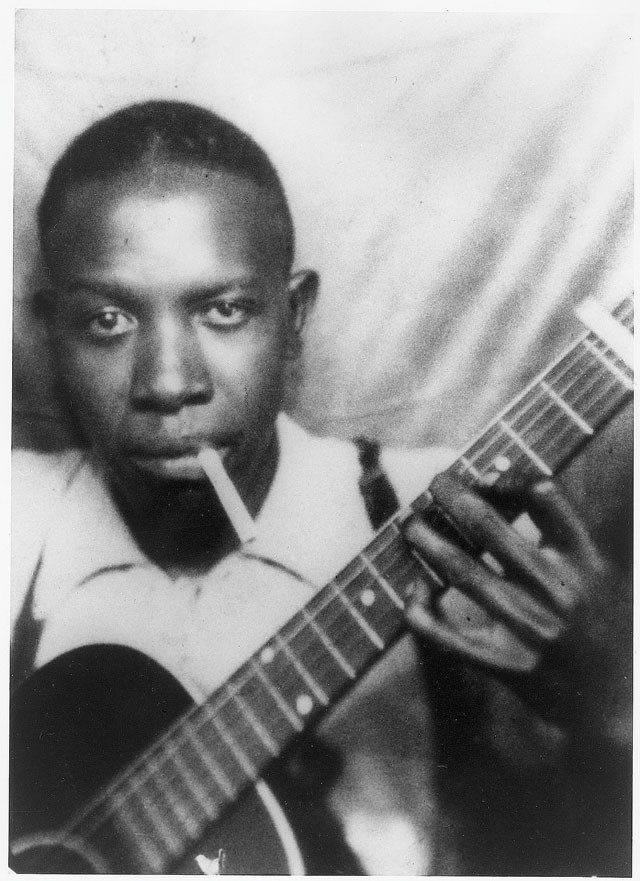 Robert Johnson might the be the most effective musician in history. He died at 27 and only had 29 known recordings (16 of them produced in San Antonio); his music wasn’t widely played during his lifetime, and few facts are known about his life.

Yet he’s widely regarded as the greatest bluesman of all time.

He was “the most important blues musician who ever lived,” according to Eric Clapton, who released not one, but two collections of songs by Johnson in 2004: the album Me and Mr. Johnson and the EP Sessions for Robert J. And Clapton’s not the only one bitten. Ask anyone from Clapton’s Cream to Led Zeppelin to the Rolling Stones who the most influential bluesman was, and you always go back to Johnson. And yet the mysterious artist behind “Cross Road Blues” transcends the genre. Johnson was one of those honored in the very first Rock and Roll Hall of Fame induction ceremony in 1986, and is frequently referred to as “the grandfather of rock ’n’ roll.”

Out of all the great living bluesmen, however, B.B. King is the rare case of someone with a different view.

“A lot of people think Robert Johnson was the best,” King told me from the back of his touring bus in San Antonio in 2006. “I don’t argue with them, but I don’t agree. I think [Alfonzo] ‘Lonnie’ Johnson [1899-1970] was the best blues guitarist in history. That’s my opinion.”

But King himself didn’t think twice about recording his version of “Cross Road Blues” (one of the songs Johnson recorded in San Antonio in 1936) for the 100 Years of Robert Johnson tribute released in March by the Big Head Blues Club, a star-studded project headed by Big Head Todd & The Monsters’ Todd Park Mohr.

To say Johnson — who would’ve turned 100 on May 8 — is a legend is not enough; in his case, even the so-called truths about the man seem to bend depending on whom you talk to. The fact that he was an itinerant musician who used a variety of aliases hasn’t made it any easier for his biographers. His untimely death at age 27 has been attributed to a stabbing, a gunshot, or poisoning. And his alleged deal with the devil in exchange for musical powers is a key part of that Faustian legend — supposedly, Johnson was an ordinary guitarist who became a master after meeting with the Devil at either a crossroads or a graveyard. Only God — or the Devil — know.

“People know about his deal with the devil, but they haven’t heard the story of his deal with [American Recording Company], the record label,” said Robert Brink, the director of Devil Deal Blues, a short film to be shot in San Antonio in 2012. “Robert Johnson was a musical genius, under-appreciated in his time, whose music changed the blues and helped invent rock. In that spirit, we’re telling the story the way Robert Johnson or maybe Shakespeare would, creating drama and feeling, not documentary. We feel San Antonio’s importance in the world of music is so huge, we have to shoot [in SA] rather than in our school studio in New York.”

The more you dig into Johnson’s life, the more questions arise. What we do know is that on November 23, 26, and 27, 1936, Johnson recorded 16 of his 29 songs inside room 414 at the Gunter Hotel in San Antonio. For $169 a night, you can still rent the room, now turned into a parlor facing the corner of East Houston and North St. Marys. The entrance to the hotel (now owned by the Sheraton chain) has a large plaque commemorating the fact that it was there that the most influential blues recordings ever were produced. Using a big portrait of a smiling Johnson (one of only two known photographs of him), the hotel proudly announces to the world that it was there that Johnson recorded. It’s to be expected that at least one historian disputes even that.

“Who told you it was in room 414?” asked musicologist Robert “Mack” McCormick, who lives in Houston and was featured in the 1992 documentary The Search for Robert Johnson. “I did my own research and I came with a different room number.” McCormick also has a problem with the fact that only Johnson got recognition for those recording sessions when they’d been going on since November 10 with a long list of musicians including W. Lee O’Daniel and His Hillbilly Boys, Al Dexter, and Hermanas Barraza, among others. “But Johnson became very famous because of all the help by people like Eric Clapton and Keith Richards,” McCormick said.

What even McCormick doesn’t dispute is the power of those recordings. “In those days, newcomers wouldn’t record more than eight songs,” McCormick told the Current. “But he was called back for more. That goes to show you how good he was.”

It was a talent scout named Ernie Ortle who found Johnson in Mississippi and convinced him to come to San Antonio to record for American Recording Company’s Vocalion label. Producer Don Law supervised all the label’s recordings, and Johnson first recorded eight songs on November 23. On the 26th, he did one version of “32-20 blues.” On the 27th he did seven more, including the seminal “Cross Road Blues.”

Johnson would record the rest of his songs in Dallas in June 1937. He was paid in cash, earned no royalties, and died under mysterious circumstances on August 16, 1938. It wasn’t until 1961 that his music was reissued and his reputation started to grow. In 1991, The Complete Recordings (Columbia) won a Grammy for Best Historical Recording, and in 2006 Johnson received a Lifetime Achievement Grammy. Rolling Stone lists Johnson as the fifth best guitarist of all time, only behind Jimi Hendrix, Duane Allman, B.B. King, and Clapton (who thinks Johnson was “the best folk-blues guitarist that ever lived, and the greatest singer and writer”).

Details, facts, and myths, aside, the only true, corroborated fact we have to judge Johnson’s legacy is his music. So, how good was he? Why is everybody so nuts about him? What, specifically, made Johnson not only good, but arguably the greatest ever?

“Who is the other guy playing with him?” Keith Richards once asked Brian Jones when the founding Stone played him a Johnson song. “I was hearing two guitars, and it took a long time to actually realize he was doing it all by himself.”

Johnson used simultaneously the different elements of the Delta blues (the fingerpicking, the strumming, the slide), while adding his own unique offerings including sophisticated forms only found in classical (when to speed up and slow down) and flamenco.

“The way Robert Johnson rolled his notes — he had a kind of way of strumming down and rolling out all the fingers, one right after the other,” said singer-guitarist Rory Block, who will perform this weekend at Sam’s Burger Joint. “He did it all naturally. And when I heard flamenco I began to notice, ‘Wow, Robert Johnson does a lot of these same things,’ these beautiful rolls and stuff. They’re not easy to do. They’re very sophisticated. Then I learned that there were many flamenco players coming through Mississippi in the early 1900s, and I thought, ‘That proves it to me.’”

Johnson’s influence affects not only other musicians, but is directed at any music fans willing to try anything that’s raw, authentic, sophisticated, yet accessible.

“Johnson’s vision was of a world without salvation, redemption or rest,” wrote Greil Marcus in his 1975 book Mystery Train. “Johnson’s music is so strong that in certain moods it can make you feel that he is giving you more than you could have bargained for, that there is a place for you in those lines of his.”

Not surprisingly, Martin Scorsese — another great swept away by the Johnson mystique — said it best.

“The thing about Robert Johnson was that he only existed on his records,” Scorsese said in his foreword to Alan Greenberg’s book Love in Vain: A Vision of Robert Johnson. “He was pure legend.” •