The People's Nite Market: Where You Find Crafts, Soaps and Ethiopian Snacks 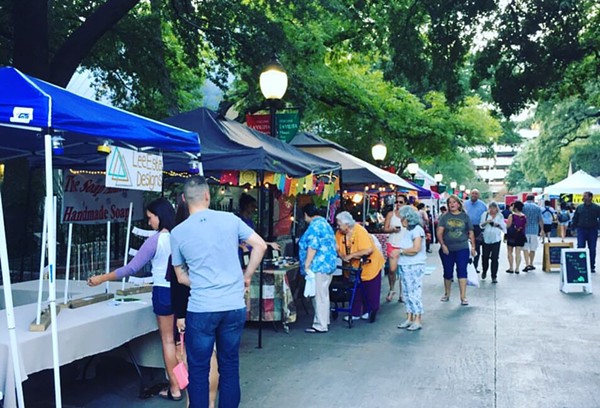 Yes, you can always come back home ... but it's great when returning means goodies for hometown friends. For Valeria Hernandez and Jovanna Lopez, adding an accessible and eclectic market was almost necessary. These days, you can shop for household goods and more at The People's Nite Market.

Hernandez, an actress and community organizer, left San Antonio to pursue acting in LA more than 15 years ago. Lopez, dining and marketing manager for O'liva Healthy Local Cuisine & Tasting Room, shared a similar story. The SA native moved to New York in the early 2000s with Americorps, where she learned to live on a tight budget and worked on community outreach that included planting gardens, working on murals and establishing literacy programs.

"I think we connected because we were both depressed," Lopez said. "I don't know about LA, but when you ask people that have moved away from New York, it's like a drug that you have left behind and you're always craving it and you always want to go back in some way ... I created my own little world of things and I brought it back with me."

That means establishing a cross-cultural night market held every other Tuesday through November 17. For its first season at La Villita, the market has secured at least 30 regular vendors that go outside the usual scope of what qualifies as market fodder.

Produce baskets ($10 for a really great mix) are curated by the pair from River City Produce, homemade salves and fragrant soaps come via Soap Addicts, and San Anto bling and décor's made an appearance via Sweet Craft Jewelry and Very That tiles.

And attendees can't go hungry at The People's Nite Market either. The women pair Cocina Heritage, which created a new vegan tamal for the market, with Cubanos from Ay Papi Puerto Rican truck and both meat- and veggie-filled plates filled with spongy injera flatbread via Berbere Ethiopian Cuisine.

"Both of us were familiar with Ethiopian and we didn't want to drive an hour up the road to get it from Austin," said Lopez, who was introduced to the fare by a former beau, while Hernandez's daughter had an Ethiopian nanny when she was growing up.

"One thing we spoke about a lot was that we missed the diversity of these bigger cities," Hernandez said. "When I was homesick, I found the other side of 410 where I could get my threadings and my Moroccan food. We wanted to include that international community of vendors to get people to know the other side of San