The Phantom Room’s Got Your Dancing Needs Covered

There's nothing better than a good basement bar. Not stuffy or exclusive, and yet a step-up from college bars of yore, these kinds of bars generally attract laid-back customers and have affordable prices to boot. Enter the Phantom Room.

Owned by the same people behind Faust and several other ventures along the St. Mary's Strip, the Phantom Room was said to have a similar spooky vibe and eclectic crowd. It was also supposed to have a club feel — local DJs and musicians often perform into the early morning hours. Despite not actually being located in a basement, I was eager to check it out.

I arrived on a Thursday night at 9 p.m. on the dot, right at the beginning of happy hour. What I didn't realize was that it wasn't just the start of happy hour — it was also the time the Phantom Room opened for the night. Needless to say, I was the first one at the bar. I even arrived before some of the staff.

I was greeted by a bouncer, who looked surprised to see me — my car was one of the three in the parking lot. We chatted as he scanned my ID, and he described the layout of the old-looking wooden building. 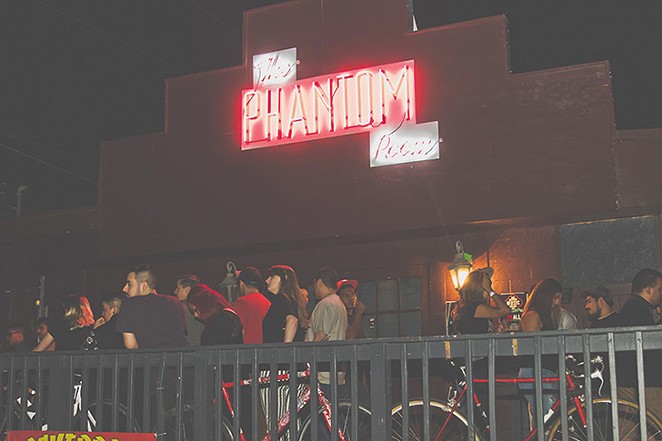 Split into two rooms, each with a distinct design and lit by saint candles and lanterns, the Phantom Room(s) seemed almost unearthly. Lines of veladoras rested on the walls, and various saints' faces gazed at me somberly through flickers of flame light. A DJ booth was in the back of the room, and a large picture of the Virgin Mary was displayed on the wall by his side.

Because I was the first customer, the friendly bartender and I chatted for a while. He told me that last night (a Wednesday) had been much busier and that usually people don't show up until about 11 p.m. Since I was already there, I decided that even though I was alone, I might as well enjoy a drink.

The Phantom Room's happy hour menu was scant and straightforward: Deep Eddy drinks for $3.50 and $4 Crown Royale. Some nights, happy hour lasts all night long, and the deals usually revolve around $2-3 well drinks or local beer. That night, craving something light, I stuck with Deep Eddy Lemon mixed with water. The bartender recommended it, swearing it tasted just like lemonade. I definitely won't be bringing that cocktail to office picnics anytime soon, but it was refreshing.

I stayed at the Phantom Room until 1 a.m., and only at around midnight did more people begin to show up. By then, the DJ was mixing just-old-enough-to-be-nostalgic throwbacks of early 2000s songs. Around that time, the energy changed. The Phantom Room became less mellow and more upbeat — it finally felt more like a club.

While the bar still wasn't packed by any means, a few people were dancing, although most of the groups were talking and laughing around the perimeters of the room. Busier weekend nights probably see a lot more dancing.

If you want to party with funky DJs and the icons on the wall, you'll have to do your research. Though the Phantom Room opened last spring, they don't have a website. They do have a Facebook page and Instagram account, where performers and happy hour deals are listed a few times a week.

The Phantom Room social media pages sometimes boast that there is no cover on certain nights. On the Thursday that I went, there was no cover, but that could have been because I arrived at the same time as the bouncer (the early bird gets the worm, right?). In essence, check their Facebook or Instagram before showing up to get the most out of your trip.

As I left, I couldn't resist snapping a picture of a neon outline of Our Lady of Guadalupe. Her fluorescent green hands folded in prayer bid me adieu on my way out, and I almost wanted to make the sign of the cross. That was the allure of the Phantom room: the slightly spooky feel mixed with a basement-club atmosphere created an undeniable charm.