The Pizza Rolls You've Been Waiting For at Halftime Pizza 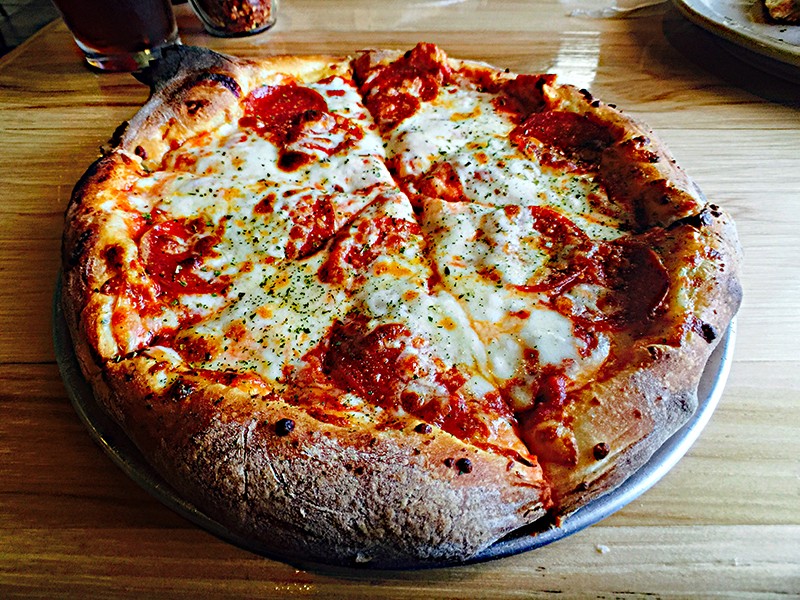 Traces of previous owners still lurk inside of Halftime Pizza in more ways than one. The hand chalk setup on the wall (from where pool tables used to stand) and a handful of tall tables in one corner and beers on tap in the other give away the spot's life as a sports bar a little less than a year ago.

But the previous establishment I'm more interested in is the one mentioned on the new owner's wall of pizza competition awards and plaques that you see when you walk in.

As a certified gordito, one thing I've learned to do is ask the servers what their favorite items are on the menu. On this occasion, I was pointed to what appeared to be one of their most popular appetizers. The handmade pizza rolls ($8 for a half order, $12 for a full order of 10) resemble traditional crispy egg rolls except they're about twice as big, cut in half and filled with enough pizza amazingness to make a calzone blush.

While not exceptional, the spicy barbecue wings didn't disappoint either.

Whenever I try a new pizza joint, I have one rule: always try a pepperoni and cheese pie. It allows the eater to taste the establishment's basic pizza making skills in a pure, unaltered way. Halftime Pizza's pepperoni and cheese was on point, its crust had a good mixture of chewy yet crisp and lightly blackened in all the right spots.

I reluctantly took the server's advice of also trying the whole chicken enchilada pizza ($10-$20) made with homemade enchilada sauce topped with mozzarella, grilled chicken, and fresh pico de gallo. Any doubt I had in ordering the customer favorite blew right out the door after a few bites. The freshly cut (and slightly spicy) pico really set it off for me.

There's something to be said about an owner that takes the time to come out, walk around the dining area and engage in conversation with his patrons. Not as in a simple "hello" or "how was everything," but rather sticking around more than 30 seconds to listen to and talk with a customer. It's a great old school way of doing business that one doesn't really see anymore.

While the pico de gallo on the tasty enchilada pizza was a fresh addition to an old favorite, owner David Garcia's (of former Alamo City Pizza Parlor) hospitality was even more refreshing.