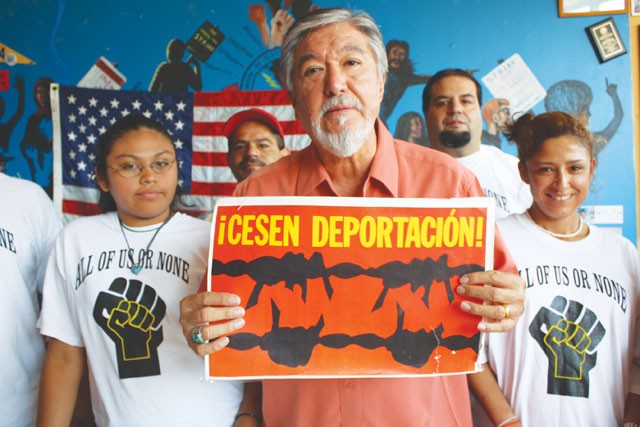 It may smack sustainable-city leaders in such affluent locales as Berkeley, Portland, or Chicago as an upstart challenge, but on Monday San Antonio Mayor Julián Castro minced no words in declaring that the Alamo City is now officially gunning to be the nation’s top dog in clean-technology development. Castro told hundreds of influential guests at what can only be described as the largest, best-dressed press conference in recent memory, “San Antonio, it can be said today, is not a follower, it is a leader.”

This week the same can be said of Castro. Upon his 2009 election, the young mayor inherited a green-tech vision that had sprung out of the political vision of the Hardberger administration and was given validation and direction through the work and encouragement of influential consultant Jeremy Rifkin, but with a strike at dirty coal, commitment to additional solar, and the unveiling of a team of clean-tech companies coming to San Antonio, the dream of Mission Verde has became the sole property of Castro.

Introducing a cadre of new clean-tech “partners,” collectively representing only a couple hundred jobs for the city, Castro said, “In the United States there is no single city or region that has captured the mantle of the new energy economy city. … Very simply put, today is the beginning of San Antonio’s effort to become the new energy economy city.”

In one stroke, CPS Energy lowered the boom on our oldest and dirtiest coal plant, Deely units 1 and 2, promising to close it by 2018 and thereby reduce damaging emissions like sulfur dioxide by 85 percent and mercury by 58 percent, according to CPS CEO Doyle Beneby. While widely applauded, reps from Public Citizen questioned the wisdom of a “clean” coal representative sharing the stage with bona fide clean-tech reps like LED lighting company GreenStar, moving their HQ to SA; pollution-free cooling experts Cold Car USA; energy-efficiency outfit Consert, also setting up shop locally; and solar titan SunEdison, which announced a new 30MW solar field for our city. In essence, CPS hopes to replace some of those lost Deely megawatts by entering a 25-year agreement with Summit Energy expected to break ground on a “clean” coal plant outside Odessa later this year. The company plans to be able to capture 90 percent of its greenhouse gases to be stored underground, most likely. The technology of carbon sequestration has been delayed by high costs, but has also been widely lambasted as an effort in futility. Most recently, Stanford geophysicist Mark Zoback found that the practice increases the potential for earthquakes large enough to release the captured gas back into the atmosphere.

Activists are planning what they hope will be a massive protest hitting the streets on July Fourth, aiming to draw national attention to Texas SB9, the bill that would (watch for the double-negative) forbid any Texas law enforcement agency from not allowing its officers to ask about the immigration status of residents. They’re hoping the U.S. Department of Justice will investigate changing Texas immigration policies in the way they did in Arizona.

“Here hopefully that will happen as well,” said Antonio Diaz, founder of the Texas Indigenous Council. “The celebration is over the Constitution, and this is a state law we feel is unconstitutional.” Fuerza Unida, Southwest Workers Union, and the Esperanza Peace & Justice Center will be joining Diaz’s organization in the march.

Also joining will be Jaime Martinez, who’s taking a break in the fight for a Cesar Chavez Blvd running through downtown SA. “It’s a sad day when we in the state of Texas pass a law that criminalizes [those] who look or sound foreign,” Martinez said. Under SB9, he added at a Saturday press conference, officers would have the right not only to give you a ticket if you are speeding “but to question whether you look American enough for them.” All of Us or None, a national organization advocating on behalf of the incarcerated and formerly incarcerated, will also join the march.

One question still hangs over the debate surrounding Casa Maldonado, affectionately dubbed the “Pink Building” by those who would preserve it: Can it be salvaged? As Council unanimously voted last week to reject historic landmark status for the building, that question remained largely unanswered. The vote, which denied preservationists the one tool that could have halted the Avenida Guadalupe Association’s plans to demolish the small pink house, could very well mark the end of the long battle to save Casa Maldonado, an effort by an ardent group of community organizers and preservationists who insist the building is a treasured piece of Westside culture and history.

Avenida CEO Oscar Ramirez has long said Casa Maldonado is unsalvageable, pointing to an engineering report commissioned by Avenida in December that states repairing the building and bringing it up to code wouldn’t be “structurally feasible.” But last week the Westside Historic Preservation Group and the Esperanza Peace & Justice Center, groups hoping to save Casa Maldonado, scored an emergency grant from the National Trust for Historic Preservation to commission their own structural report on the building. “We’ve never believed that demolition is the only option for Casa Maldonado,” said Esperanza director Graciela Sánchez. “[Avenida] had a design they liked, and demolition was part of that…of course their report would say [preservation] is impossible.”

Esperanza had hoped the vote could at least be postponed until after their new report surfaces. Structural engineer Patrick Sparks, who most recently worked with the city to preserve and rebuild the historic Eastside Hays Street Bridge, is set to inspect the building and make his own report sometime within the next week.

Now that they’ve essentially been given clearance to demo the building, it’s unclear how closely Avenida will continue to work with preservationists, though council members made it clear they prefer further compromise. •

• COLD CAR Expects to bring 35 employees when they move to town. The company plans to hire an additional 50 new employees, mostly mechanics, welders, etc.
• SUNEDISON To hire six full-time employees for a regional office in SA, then hire between 60-90 temporary construction jobs for each of three 10MW solar facilities.
• GREENSTAR Bringing 38 employees as they set up HQ in SA, and plans to hire at least 15 additional employees locally, mostly technicians and skilled manufacturing positions, with more as needed.
• CONSERT To bring 50 employees when it sets up its home base here and expects to grow to 150 by 2014.
• SUMMIT Power plant will create 1,500 to 2,000 construction jobs in West Texas, and more than 150 full-time post-construction jobs. It also plans on having a San Antonio office.