He was a real-life Indiana Jones. Literally: the Harrison Ford character was based on British explorer Percy Fawcett. A cartographer and archaeologist, he was obsessed with the idea that remnants of a lost dead civilization were hidden in the Amazonian jungles, and he disappeared in those jungles in 1925 on what would be the last of many expeditions to prove his theory. What became of him remains a mystery. Why isn’t Fawcett as well known, at least by name, as Ernest Shackleton or Amelia Earhart? His adventures in the early 20th century captured the public imagination in Europe and the United States, who followed along via newspaper dispatches from the jungle. And somehow we’ve all but forgotten him. This is as mysterious as his disappearance.

The Lost City of Z is here to remedy that, though it’s not likely to have the impact of Raiders of the Lost Ark. This is not an action movie but an adventure of the intellect and of the heart, and it’s not so much about the science of mapmaking and the unraveling of forgotten history as it is about what drove the mapmaker and historian. Filmmaker James Gray — who based his script on journalist David Grann’s 2009 book about Fawcett — has moved far away from the New York City that has been the setting for all his previous films, including such marvels as Two Lovers and We Own the Night, but he retains his focus on character over plot, on cause over effect, on the journey rather than the destination. It’s this weighty centering of his storytelling that has given his films a genuine feel of freshness and discovery even when they cover well-trod ground, and that gives them an import that makes them stand apart, and that’s true of Z too.

It’s a teeny bit of a shame, then, that the weakest aspect of Z is Charlie Hunnam, who is a bit blah as Fawcett. There are a few riveting moments when he sells Fawcett’s passion, as when he returns to London from a Royal Geographic Society mission to map the border between Bolivia and Brazil, on fire with the conviction that the supposed “green desert” of Amazonia was once home to a grand civilization that long predates that of the British empire. The society members are appalled that he considers the “savages” he met in the jungle to be equals of white men capable of such a culture; and in a speech to the society he rages at their bigotry in a scene that actually made me whisper “wow” in the dark of the cinema at Hunnam’s fierceness. But moments like that are too few here. Often, Robert Pattinson as Fawcett’s aide-de-camp Henry Costin creates a much stronger presence just sitting quietly in the background. 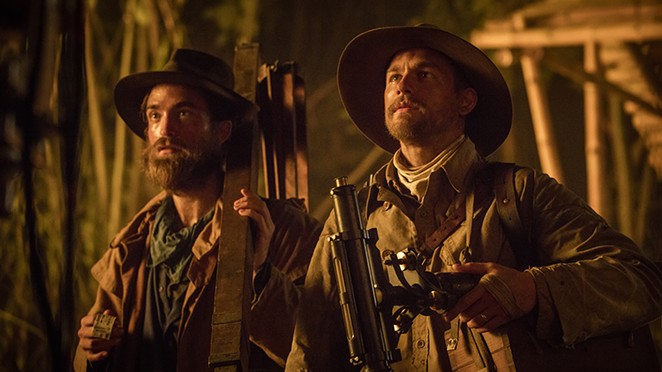 I wish Hunnam could sell Fawcett’s passion as well as Sienna Miller does as Fawcett’s wife, Nina, who keeps getting left behind to raise their children on her own when he goes off for years to South America. I wish Fawcett was forced to confront his own bigotry about Nina’s desire for travel and adventure: she would like to go with him, but he insists that the jungle is no place for a woman. The film notices that it’s not a place that all men can handle, either, but if Fawcett makes that connection, we never see it.

Gray does, at least, sympathize with Nina: as her husband heads off on what would be his final adventure, a tiny reverie sees her imagining herself walking into the jungle too. It’s tender moments of visual poetry like that that fuel The Lost City of Z’s undeniable power: of the dangerous beauty of the Amazon, of the lure of the unknown, of the draw of new friendships, which Fawcett is constantly forging with those “savages.” Time is strange here, occasionally — years feel like days, sometimes — and yet Gray manages the extraordinary feat of making the exotic feel everyday. Perhaps that is the best tribute to Fawcett we could expect: If extraordinary new worlds and new peoples he encountered soon became familiar, so they should for us too. And they do.