The Red Mamba Teams Up With Big Red

San Antonio's Spurs Forward Matt Bonner, known for his range from downtown and signature red hair, has signed on to serve as Big Red's brand ambassador. "The Red Mamba" might be the biggest free agent signing in the history of the Texas-based soft drink company, which will plaster images of Bonner with Big Red all over Central and South Texas stores later this month.

Bonner may not command the endorsement deals Tim Duncan, Manu Ginobili or Tony Parker, but he knows a good pairing when he sees one.

"I’m really excited to team up with such a unique, iconic Texas brand in Big Red soda," said Bonner, who is averaging 6.5 points in 17.5 minutes per game this season. Big Red also recognizes that this is a match made in basketball heaven.

"Big Red is San Antonio’s #1 flavored soft drink and Matt is the only redhead in the NBA," says Big Red's Senior Vice President of Marketing Thomas Oh. "So it makes perfect sense for San Antonio’s two favorite reds to partner together to get fans pumped for another championship season." 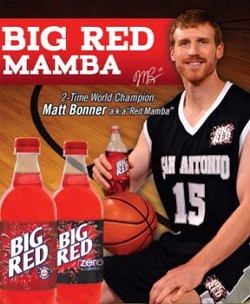 With Big Red signing one San Antonio Spurs player, you've got to wonder if they can't land deals with other members of the team. Another popular Big Red brand soft drink is Big Pineapple, a fruit that a U.S. Virgin Islands native like Tim Duncan would be very familiar with.

If Big Red is feeling really adventurous we're sure Manu Ginobili would gladly endorse a Yerba Mate Soda, based off the popular Argentinian drink, Mate. They could even call it Big Manu, since Big Yerba and Big Mate don't roll off the tongue all that well. Maybe this last one is a stretch.

NBA fans can look forward to a Big Red sponsored, text-to-win sweepstakes in the spring where the lucky winner will receive an autographed Matt Bonner jersey.

Superstitious sports fans needn't worry, nothing suggests that this partnership will create some sort of Big Red curse like the frighteningly persistent NBA Live cover athlete curse that has plagued NBA stars from Shaq to Tony Parker since 1996. Should Bonner go down mid-season with a serious injury though, sports fans will know who to blame.

Here's another image of the Bonner-Big Red team-up.