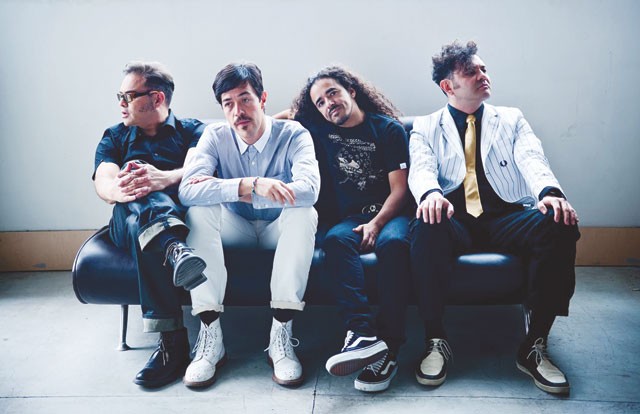 This year marks the 20th anniversary of the self-titled debut of Café Tacuba, the band that turned the world of Latin alternative music upside down with an unusual early format of a drum machine, acoustic guitar, stand-up bass, and a high-pitched charro-sounding singer wearing guarache sandals and a straw hat.

For their August 15 show at Sunset Station (which will be opened by L.A.'s La Santa Cecilia), the band will present some songs of their new album El objeto antes llamado disco (The Object Previously Known as Record), a collection of 10 new songs recorded live in intimate shows in Santiago, Buenos Aires, Mexico City, and Los Angeles. "We recorded with the four of them facing each other like they do in rehearsal, in the center of the venue, not onstage, and the people around them," co-producer/engineer Aníbal Kerpel told the Current. "They recorded an album with people watching them. If they made a mistake, we would stop and start again."

For the first time since 1999's Revés/Yo Soy, the band went back to their original drum machine-based format. "You'll hear the original Tacuba sound in a very refreshing way," said Kerpel, who co-produced alongside the band members and Gustavo Santaolalla (the usual Tacuba production team), plus Joe Chiccarelli serving as associate producer/engineer. "Yet, there are things you never heard in Tacuba, especially in [Joselo Rangel's] guitar — all electric but with lots of delays, layers, and effects he's never used before. And Emmanuel [Del Real] used a lot of vintage synthesizers. It's a new yet familiar sound."

Kerpel said the demos the band put together before the recording sessions sounded great, but once they performed those songs for an audience, things exploded.

"The crowds ranged from 150 to 500, and the chemistry was amazing," Kerpel said. "For [the production team] it was very pleasing to find the band in a very good moment, both musically and between themselves. It's very hard to keep a band together, and they've been together for 23 years. And, like all great bands, you can tell it's them, but they never cease surprising you."