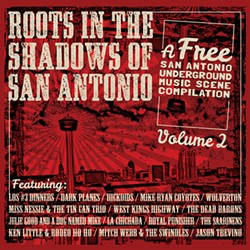 Encouraged by the hubris of a loud tweed amp and a solid haircut, it's easy for young musicians to think they're the only game in town — that their social media strategies, RSVPs and rehashes of old myths are a revival of sorts, resuscitating Bolan glam for a dozen friend-fans on a Wednesday night.

But you can't revive what isn't dead.

Now in its second installment, Roots in the Shadows of San Antonio is an alibi for San Antonio music vets, proving that the old guard never left its post. On 15 cuts assembled from scene doyens, the compilation is a SparkNote guide to old school SA.

"The theme of the bands on the CD is that they're all veterans of San Antonio, two-decade, three-decade old veterans of original music in San Antonio," said Phil Luna in between puffs of filterless brown paper cigarettes that would make one's lungs weep just looking at them. "They're exactly that, they're the roots."

From the Rolling Stones devotion of the Hickoids' "A.M. Lover By The Windowsill" to the little joys of Julie Good and a Dog Named Mike's "Texas Ice House (Viva La Tuna!)," Volume II runs the city's gamut of genre.

"The entire project is to have a compilation CD that we can put into anybody's hand, for free, and have them for the first time get turned on to a whole community of songwriters," said Luna.

The idea began in 2012, the downpour of a brainstorm from Luna and Rosedale Highs singer Jason Trevino. After raising funds and momentum for a couple years, the first installment in 2014 featured San Antonio workhorses like Snowbyrd, Fear Snakeface and Garrett T. Capps.

The second release picks right up, documenting bands with a slight recording footprint, hard to hear outside their favorite bars and stomping grounds.

For a while, I've been trying to find a recording of Miss Neesie & the Tin Can Trio, a stripped down troupe of zydeco hillbilly big band the Earfood Orchestra. With "Once In A Blue Moon," a hookless collection of non-sensical non-sequiturs organized by a backbeat groove, Roots kindly obliges.

The comp's opening statement comes from a reputable source: barrio bards Los #3 Dinners. On "Can't Stop Gotta Rock," the band spits out the chorus like attendants to the old gods of rock 'n' roll. When they sing, "I know a great little place about a mile from here," take down the address. Around since the '70s, The Dinners know all the best juke joints and shortcuts in town.

Albums Roots in the Shadows of San Antonio