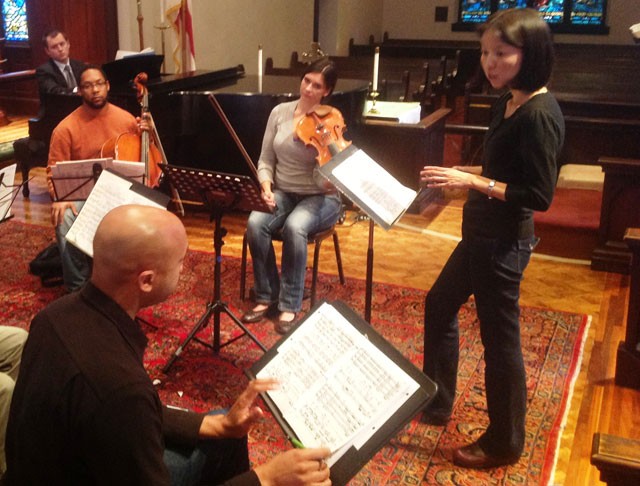 In 1853, the renowned Romantic composer Robert Schumann called Johannes Brahms the “Messiah of Music”. In 1947, modernist composer Arnold Schoenberg called Brahms “the Progressive.” Today you might think of Brahms as you picture Sylvester the Cat frantically singing Brahms’ Lullaby in a cartoon on YouTube, or as a comrade of The Most Interesting Man In The World in some bearded adventure. There’s a chance starting this weekend, and going through February to experience all those impressions with the BrahmsFest SA (BrahmsSA.com) curated by the San Antonio Symphony.

On tap Sunday is the first concert that “celebrates the Romantic” — a program by Musical Offerings called “Brahms and Beyond.”  Musical Offerings founder and artistic director Joan Christenson is excited.
“The Piano Quintet? Huge!” she said. “It’s a wonderful piano part, great string quartet part that goes with it! His Opus Ten Serenade is definitely one of his most popular works.” There will also be a work composed by Ernst von Dohnanyi, two movements of his Serenade for string trio. Dohnanyi looked up to Brahms, as did the composer Antonin Dvorak.

Dvorak received a music prize, which Johannes Brahms judged, and was very impressed with the Czech composer. Publishing contracts and performances of Dvorak’s music were a direct result of Brahms’ friendship and influence. Musical Offerings will feature baritone Timothy Jones in Dvorak’s Gypsy Songs.

"They are truly a joy,” said Christenson. “I think he captured in the music so many different sentiments and such a passionate portrayal of the characters — everybody loves to sing these songs."

No doubt everybody will recognize the melody in Songs My Mother Taught Me in this set. They’ll recognize Jones too, who calls San Antonio sort of his musical home, where he developed his voice and numerous performances.

“Just about 10 years ago, I was asked to prepare it for a performance at a festival in Oregon,” said Jones. “That just happened to be the same year I became ill and had to undergo chemotherapy. I ended up having to cancel that performance, but this has given me a chance to go back and revisit the piece, because the work is truly a masterpiece.”

The 1942 piece is a protest against the Nazis and tyranny. It is also a mature, complex composition that uses Sprechstimme, a cross between speaking and singing where the tone quality of speech is heightened and lowered in pitch through musical notation.

"I think many aspects of the piece would be too difficult to master for someone who is not a trained singer,” said Jones.  “Not impossible, but very difficult.”

(The Brahms Fest SA continues Sunday night with a collaboration of Musical Bridges Around the World and the San Antonio Chamber Music Society with a Salon Concert at 6:30 p.m. More concerts including the San Antonio Symphony and 19 artistic partners continue through February. Info at BrahmsFsetSA.com.)